Step Ten: Updating the “Ten Steps to Fascism”: Authoritarianism in a Pandemic [Essay One] 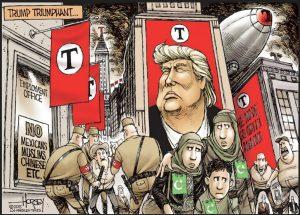 Step Ten: Updating the “Ten Steps to Fascism”: Authoritarianism in a Pandemic.

Is the all-too-real COVID crisis being exploited in certain ways as cover for those who wish to erode democracies worldwide, and to grab other kinds of power – such as economic power, power to control and track populations’ movements, and powers to invade privacy? I’ll argue here that it is and show specifically what President Trump is likely to do in the next two months, based on the playbook that all tyrants use to suspend democracies. The all-too-real COVID emergency  — and I repeat that phrasing so as not to be taken out of context — is indeed being used exploitatively, as we will see,  by would-be authoritarians and would-be oligarchs, to generate rationales and cover, to execute power grabs on many levels, that a noncrisis situation would not permit.

.      Before we go on: I believe in science and medicine. I wear a mask in public and think others should do so in a pandemic. I believe in a sane public health policy. This essay is not purporting to recommend policy based on medicine. It is asking us to look deeply at how the pandemic’s demands are being presented in ways unprecedented in free societies – in ways that previous infectious public health emergencies never attempted —  in formats that result in restrictions of liberties; and to warn that we really need to understand exactly what liberties are at stake right now. The pandemic will be over someday; and we need to know that we are returning to a context of freedom; that the “new normal,” a phrase that appeared alarmingly early in the pandemic, and one that never bodes well, is not a future in which one crisis has passed, but has stripped us of liberties and economic rights forever.

Many have asked me to update my 2007 Guardian essay, “Fascist America in Ten Easy Steps.” https://www.theguardian.com/world/2007/apr/24/usa.comment.

Authoritarian Trump is making the kind of use of the pandemic crisis that is predictable if you understand how democracies are killed off.

That essay was the basis for the bestselling 2008 book about the destruction of democracy, The End of America. The book spelled out how the administration of George W Bush set in motion a series of steps that authoritarian leaders on both the left and on the right have always taken, that reliably close an open society.

Seeing how the system of eroding democracy actually works, in times and places as diverse as Mussolini’s Italy in the 1920s, National Socialist Germany and the Communist Soviet Union in the 1930s, Argentina under Auguste Pinochet in the 1970s and Marxist China in the 1980s, gave these readers a blueprint with which to recognize the playbook of closing democracy and track key benchmarks.

These are the Ten Steps that I identified:

Briefly, I am sorry to say that we are now at Step Ten. Based on the playbook of fascism and totalitarianism, here is what you can expect to experience or witness in the next two plus months. I hope and pray I am wrong but this is how history says event may well unfold:

People should understand that such commentators don’t freelance with statements such as these; they are acting, most likely, as what campaigns call “surrogates”- mouthpieces. More and more public figures, politicians and even journalist will become timid or go silent altogether after being on the receiving end of quiet or public threats.