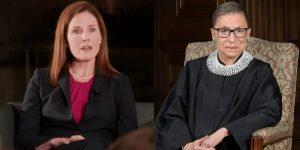 Amy Coney Barrett and Ruth Bader Ginsburg could not be more different when it comes to their respective notions of justice. Ginsburg, a pioneer in the protection of gender equality, spent her entire career, including 27 years on the Supreme Court, fighting for the rights of women, immigrants, people of color, criminal defendants, LGBTQ people, workers, people with mental disabilities and the poor. Barrett seeks to strip health insurance from tens of millions of people and crush reproductive rights.

Donald Trump rushed to nominate Barrett and enlisted his consigliere, Senate Majority Leader Mitch McConnell (R-Kentucky), to ram her nomination through the Senate so she can support Trump’s legal challenges to any election results that favor Joe Biden. Trump, who refuses to commit to a peaceful transfer of power, has been conducting a misinformation campaign about (non-existent) voter fraud and signaling that he will lose only if the election is “rigged” against him with expanded mail-in voting.

During her three years on the U.S. Court of Appeals for the 7th Circuit, Barrett demonstrated her racist bona fides when she countenanced what her fellow judge called a “separate-but-equal arrangement” in which a Black American was transferred in order to segregate a workplace. In EEOC v. Autozone, the EEOC claimed Autozone segregated employees based on race by assigning Black employees to work in Latinx neighborhoods. After a three-judge panel of the 7th Circuit denied the EEOC’s claim, Barrett voted against the entire 7th Circuit rehearing the case.

An avowed opponent of reproductive rights, Barrett called Roe v. Wade a “judicial fiat,” stating, “The framework of Roe essentially permitted abortion on demand, and Roe recognizes no state interest in the life of a fetus.” As a judge on the Court of Appeals, she wanted to rehear a case that could limit the right to a pre-viability abortion, sought to overturn Supreme Court precedent allowing states to regulate protestors who block abortion access, and voted to require that parents of girls under 18 be notified before abortions are performed. She has also opposed access to contraception under the Affordable Care Act as “an assault on religious liberty.”

Barrett has consistently sided with corporations over workers. She voted to restrict enforcement of laws against age discrimination, sought to limit the power of federal agencies to hold accountable companies that lie to consumers, and cut back on the rights of consumers against predatory debt collectors.

Like her mentor Antonin Scalia, for whom she served as a law clerk, Barrett considers herself to be a “textualist” and an “originialist.” That means she claims to rely on the specific meaning of words in statutes and divines the intent of the founders when they drafted the Constitution. “But these words are abstractions,” Jeffrey Toobin wrote in the New Yorker. “In the real world, they operate as an agenda to crush labor unions, curtail environmental regulation, constrain the voting rights of minorities, limit government support for health care, and free the wealthy to buy political influence.”

Barrett once stated that a legal career is a means to an end “and that end is building the Kingdom of God.” Barrett is a member of the Catholic cult, People of Praise, which demands strict obedience from its adherents. Each male member of the cult is assigned a “head” and each woman is assigned a “handmaid” to make decisions about their lives. Coral Anika Theill, a former member of the same cult, told Amy Goodman on Democracy Now! about the abuse she suffered after she had a miscarriage, when she was “interrogated until wee hours of the morning and psychologically abused.” Theill likened the “cruelty and bullying” she experienced to The Handmaid’s Tale.

During Barrett’s contentious 2017 confirmation hearing for the Court of Appeals, Senate Judiciary Committee member Dianne Feinstein confronted the nominee, saying, “The dogma lives loudly within you.” Barrett’s religious priorities combined with her disdain for stare decisis (respect for Supreme Court precedent) make for a lethal combination if she joins the high court.

If her nomination is confirmed by November 10, when the Supreme Court hears oral arguments about the fate of the Affordable Care Act, Barrett could provide a vote to strike down the law. In California v. Texas, the individual mandate, and indeed, the entire act, is on the chopping block. If the majority of the Court invalidates the mandate, it will then decide whether that part of the act is severable, which would mean the rest of the act remains in place.

The 48-year-old Barrett will likely provide a solid vote to strike down the Affordable Care Act and overrule Roe v. Wade. She will be a reliable “justice” for the radical right for decades.

Spread the love
Spread the love
Previous StoryOp Ed: Joe Sackman: Experience, Ability, and Heart
Next StoryStep Ten: Updating the “Ten Steps to Fascism”: Authoritarianism in a Pandemic [Essay One]