What are the Ten Steps to Fascism? How did we Get Here – Step Ten? [Essay Two] 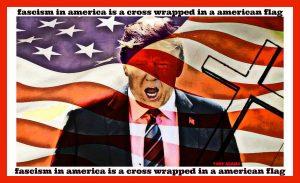 I’m updating the End of America to let you know how we got to be at Step Ten: Suspend the Rule of Law.

The playbook of fascism, I must stress, is nonpartisan, and President Trump did not invent what we are living through now. He merely built upon it.

During the administration of President Obama, I (and several others) warned that Democrats were taking the authoritarian structures built up by George W. Bush, and adding news levels of oppression on the foundation already laid. President Obama was the one who took the unprecedented step of droning to death an American citizen, Anwar Al-Awlaki,  and his teenage son https://theintercept.com/2017/01/30/obama-killed-a-16-year-old-american-in-yemen-trump-just-killed-his-8-year-old-sister/; it was Obama who promised to close Guantanamo as part of his campaign agenda, then built it up a mere six months later, an expansion that I witnessed as a journalist; Obama, again, whose lawyers argued for the right to imprison journalist Chris Hedges without charge or trial, under the 2012 NDAA, a shocking piece of legislation that allows the President to detain anyone indefinitely without due process. https://www.aclu.org/press-releases/president-obama-signs-indefinite-detention-bill-law. It was he who presided over the violent, co-ordinated 2011 crackdown by DHS against the Occupy Wall Street movement, which could have been a dress rehearsal for today’s even more escalated violence against protesters. https://www.theguardian.com/commentisfree/2012/dec/29/fbi-coordinated-crackdown-occupy.       The war on whistleblowers intensified under President Obama’s Department of Justice: https://whistleblower.org/in-the-news/atlantic-obamas-war-whistleblowers/. He subpoenaed reporters such as James Risen. He advanced the prosecution of Chelsea Manning. https://www.theguardian.com/us-news/2015/mar/16/whistleblowers-double-standard-obama-david-petraeus-chelsea-manning. President Obama went after more people under the Espionage Act than had any previous President, according to the Committee to Protect Journalists. https://www.washingtonpost.com/news/the-fix/wp/2017/06/08/trump-rages-about-leakers-obama-quietly-prosecuted-them/. Examples of his push to build up further the structures of fascism he inherited, could go on and on.

But since he was a telegenic President with an uplifting rhetorical style, not to mention the otherwise inspiring fact that he was our first President of color, these abuses of democratic processes went disregarded by the left and by most mainstream media.

The problem with Fascistic processes and institutions being built up, though, is that then they are there for the next President, the one you don’t like, to use and to abuse. And here we are.

Many readers are now asking me to update the “ten steps” to address the role of the COVID pandemic.

Obviously, we are in an endgame, a catastrophic slide to lasting authoritarianism. We have very little time before we reach a point of no return. As I’ve often pointed out, democracies don’t close arithmetically but geometrically – that is, there is a slow slide during which citizens can indeed turn events in another direction, using democracy itself; but then, in the playbook of fascism, there will be a sudden coordinated shock, after which no return is possible; history shows it’s extraordinarily difficult for a nation or people to retrieve a collapsed democratic civil society that recently had a rule of law. Even then, bloodshed, arrests, suppression and anguish are the future, often for years or generations. So in the interest of avoiding that at all costs, I am saying what the playbook holds so that we might avoid that desperate future still. I’ll also explain how the very real COVID crisis is being used to move things rapidly along.

Obviously President Trump is familiar with fascism’s playbook and has moved briskly to execute it in three years. He’s not, as the left likes to state, a terrible President. He is a terrible President in a democratic context; he is fantastically effective at turning a democracy into a tyranny, and has moved with tremendous skill, speed and strategy to put in place all the elements of a totalitarian society. (I use the terms “fascist” and “totalitarian” interchangeably to stress how much the authoritarian execution of right and left, are identical in techniques and outcomes, though they differ in symbolism). At the same time as President Trump is moving swiftly through the fascist’s traditional playbook, the left is also seeking authoritarian control, if less efficiently, in mirroring ways.

President Trump did not have to “Invoke a terrifying internal and external enemy,” Step One. When he took office, ISIS was the real and terrifying threat that also was invoked to justify the erasure of our liberties. But since March 2020, the COVID pandemic has served in that useful role for both left and right and, you may notice, has thoroughly eclipsed ISIS fears.

Neither Trump nor Biden needs to create secret violent prisons (Step Two), as Guantanamo is still open; but Trump has turned ICE into a steward of prisons without accountability which even members of Congress cannot enter, and has made a spectacle of separating families, losing children, and leaving people to sleep on hard floors with aluminum blankets – none of which would pass International Red Cross inspection. Bill Moyers noted that agents of Custom and Border Patrol, wearing military uniforms, were deployed violently to constrain protest in Portland and Chicago: ‘Trump is turning the officers of the executive branch into the president’s private army.” https://billmoyers.com/story/the-presidents-personal-militia/

This militarization of domestic police forces and the brutality of incarceration – which started with George W Bush but also escalated under Obama – means that the violent arrest and unaccountable prison experience has come home to our shores.

Step Three involves the use of militias. President Trump has spoken positively of violence and tweeted others’ threats of “civil war.” Indeed at a 2017 rally in Charlotte, North Carolina, a white nationalist killed a woman and injured 35 other people. President Trump spoke of “very fine people, on both sides.” https://www.americanprogress.org/issues/security/reports/2020/07/01/482414/white-supremacy-returned-mainstream-politics/

Mehdi Hassan of The Intercept lists some of his invitations to violence:

“If you see somebody getting ready to throw a tomato, knock the crap out of ‘em, would you? Seriously. [Crowd cheers.]”

“Maybe he should’ve been roughed up, because it was absolutely disgusting, what he was doing.”

Hassan warns: “is this a preview of what’s going to happen in November? Are these right-wing militias — these domestic terrorists — with their guns, and their masks, and their combat gear, and with the encouragement not just of Alex Jones-types on Infowars or Judge Jeanines on Fox News, but also with the encouragement of the man in the White House, will they take to the streets to dispute the presidential election results? Will they riot on behalf of a defeated Trump?”

The left-wing Antifa movement is also extraordinarily violent for an American protest movement, so these violent militias, replete with confirmed infiltrators and provocateurs, exist now on both “sides” of the political divide. But this bilateral violence is also good for would-be tyrants. In a closing society, instability and provocation are both useful to autocrats: these create an excuse for the declaration of a state of emergency and consequent suspension of the rule of law.

Step Four is to set up an internal surveillance system. The COVID pandemic allows for this with “track and trace”, a development we will address in the second essay.

Step Five, “infiltrate and harass citizens’ groups,” really isn’t necessary any longer, as people gathering in groups can’t be effective now in any long term way. The COVID lockdown has basically suspended citizens’ groups. People can wear masks briefly to gather and protest, but the ban on gatherings of groups of more than six, or more than ten, depending on where you are, pretty much takes care of any effective confidential citizen activism.

Step six is: Engage in arbitrary detention and release. In Portland, “[p]ersonal accounts and multiple videos posted online show the officers driving up to people, detaining individuals with no explanation about why they are being arrested, and driving off.” https://www.npr.org/2020/07/17/892277592/federal-officers-use-unmarked-vehicles-to-grab-protesters-in-portland

Step seven is to target key individuals. Again this step is no longer as necessary, as COVID restrictions really keep new leaders from arising to move populations and keep new ideas from activating groups in any sustained way. But established influencers on the left of center in the UK and the US have been targeted by Cambridge Analytica-type reputational attacks from the right for about a decade. These are multifaceted and include calls to workplaces, legal actions, bots and troll farm attacks and other reputational assaults. Climate scientist Michael Mann describes such rightwing harassment in The Hockey Stick and the Climate Wars, and Jane Mayer describes it in her book Dirty Money.

The Trump administration goes further, though, and targets individuals in its own government: it targets those who serve in government oversight bodies: https://www.americanprogress.org/issues/democracy/reports/2020/06/01/485656/amid-coronavirus-pandemic-trump-administration-targets-government-watchdogs/. President Trump targets citizens who challenge him: he singled out a Twitter employee who dared to fact-check a tweet of his: https://boingboing.net/2020/05/28/trump-targets-individual-twitt.html. He targets individual reports: he used Twitter to imply that TV host Joe Scarborough had murdered a Congressional aide in 2001, which is false. https://www.nytimes.com/2020/05/28/us/politics/trump-twitter-explained.html.

Fear of retribution for speech chills leadership and dissent in a closing society. But COVID lockdown intensifies this weakening of democracy because new ideas and leaders are constrained from reaching audiences by being dependent on digital algorithms. If the “lockdown” lasts indefinitely, and existing leaders are attacked and undermined, the people will have no one to whom to turn when the final would-be shock, takes place.

Step Eight is to control the press. Pres. Trump has called the press an “enemy of the people” – notably, a Stalinist term, used against Nikolai Bukharin in the 1938 show trial that led to his execution. https://www.axios.com/trump-reminder-stalin-enemy-of-people-f1e22406-5626-4747-ac61-28afde1b38f4.html.

President Trump, as we know, assails news outlets as “Fake News” and attains control by such distortions of fact that the press cannot do its traditional job effectively at all, as readers can no longer tell truth from fiction; this is a methodology used by Soviet and now Russian propagandists as well to invalidate the news media. https://www.washingtonpost.com/lifestyle/media/a-history-of-the-trump-war-on-media–the-obsession-not-even-coronavirus-could-stop/2020/03/28/71bb21d0-f433-11e9-8cf0-4cc99f74d127_story.htm

Step Nine casts criticism as “espionage” and dissent as “treason.” President Trump has charged “a dozen people and entities of treason”, according to The Washington Post, though a total of 30 people has been charged with that capital crime in all of American history. He stated that the Democrats pursuing impeachment hearing should be charged with “treason” and arrested. https://www.pbs.org/newshour/politics/trump-suggests-democrats-are-committing-treason-heres-what-the-constitution-says

Step Ten is: Subvert the rule of law, and replace it with martial or military law.

We are here. This is the last step, the endgame of every bid for authoritarian power. I will tell you in this series of essays, just what we can expect for the next two months and ten days, and after that.

And I will explain how the COVID pandemic hastens this closing of democracy, and helps the autocrats.