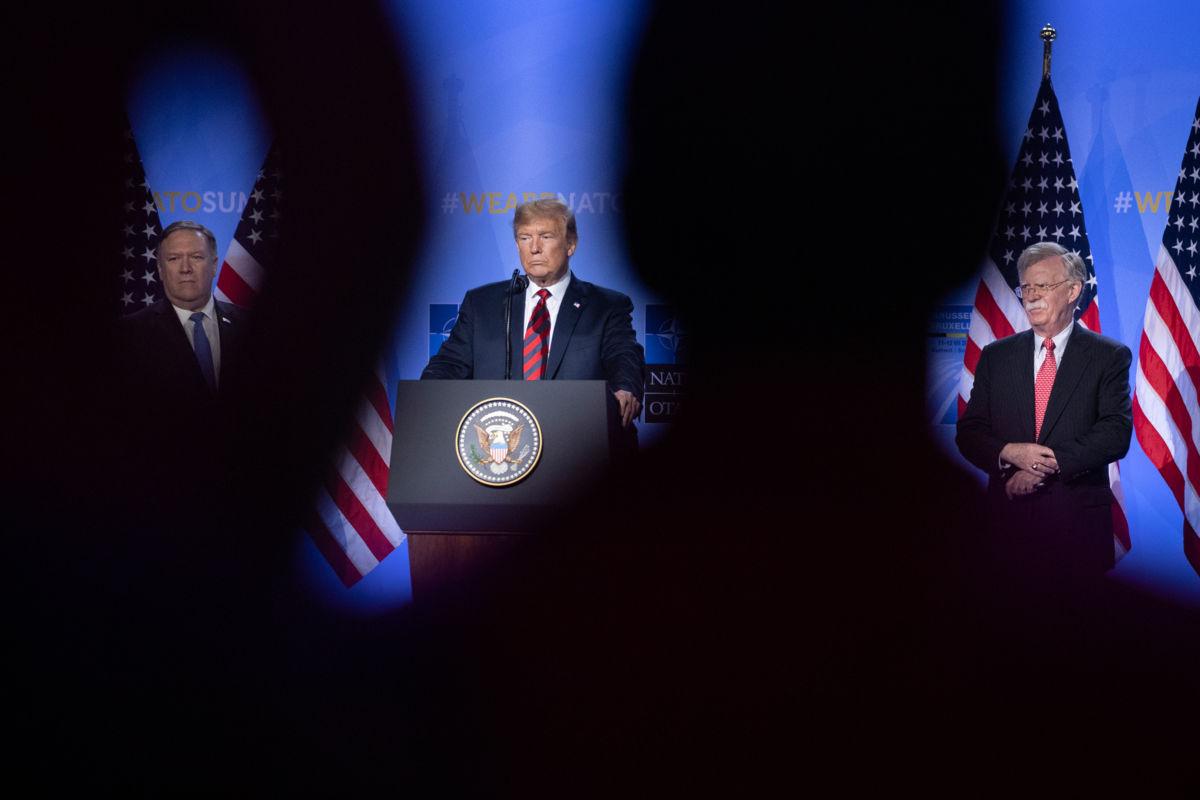 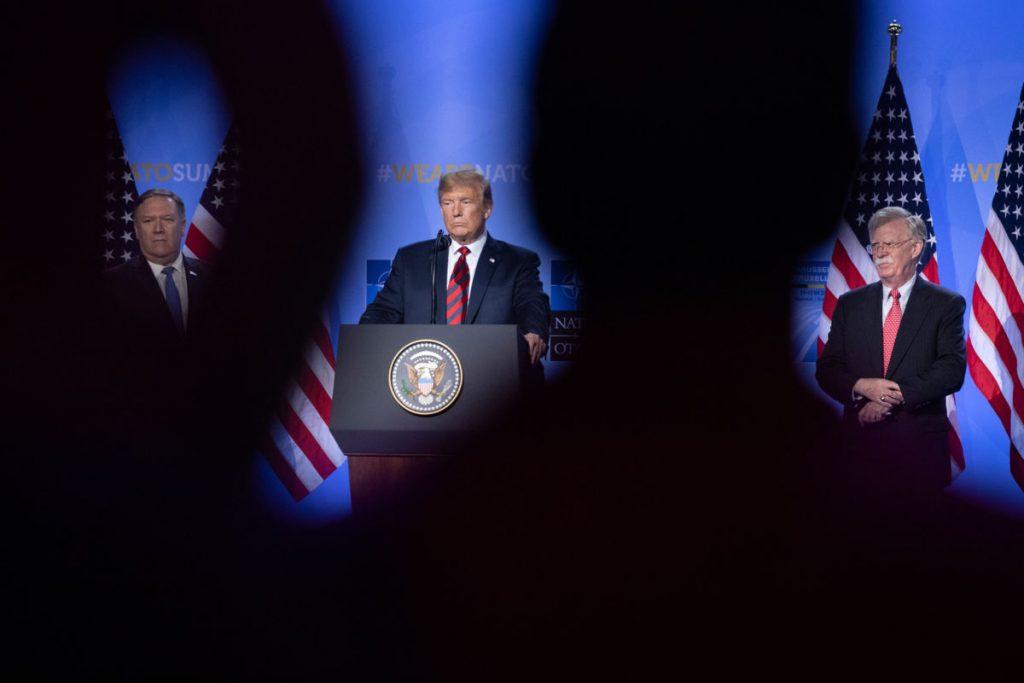 Under the guise of protecting human rights, the Trump administration is illegally meddling in three countries it has dubbed the “troika of tyranny” — Venezuela, Cuba and Nicaragua. National Security Adviser John Bolton claimed, “Miami is home to countless Americans, who fled the prisons and death squads of the Castro regime in Cuba, the murderous dictatorships of Chavez and Maduro in Venezuela, and the horrific violence of the 1980s and today under the brutal reign of the Ortegas in Nicaragua.”

The U.S. government has imposed unlawful, coercive sanctions on these nations, and attempted to mount a coup to illegally change Venezuela’s regime.

Trump and the real troika of tyranny — Bolton, Secretary of State Mike Pompeo and U.S. envoy for Venezuela Elliott Abrams — have failed in their coup attempt against the democratically elected Venezuelan President Nicolas Maduro. Trump’s troika, egged on by Sen. Marco Rubio (R-Florida), are seeking to substitute U.S. puppet Juan Guaidó for Maduro as president of Venezuela.

On May 1, Pompeo told Fox Business that the U.S. might use military force in Venezuela “if that’s what is required.” Eric Prince, founder of the infamous Blackwater mercenary group, presented a plan to U.S. and European leaders to provide 5,000 mercenaries to Guaidó.

This is particularly alarming because Russia has a solidarity presence in Venezuela and a U.S.-backed attack could risk a conflagration with Russia.

Furthermore, the United Nations Charter forbids countries from using or threatening to use force against the territorial integrity or political independence of another country. The Charter of the Organization of American States prohibits any country from intervening in the internal or external affairs of another nation. And the International Covenant on Civil and Political Rights guarantees the right to self-determination.

Meanwhile, the Trump administration has increased punishing sanctions on Venezuela as a step toward forcible regime change. “Statements from the [Trump] administration indicated that the purpose of the sanctions was to provoke a military rebellion to topple the government,” according to a new report by the Center for Economic and Policy Research.

All of these sanctions constitute collective punishment of the civilian population, which is prohibited by the Geneva and Hague Conventions.

Those sanctions are exacerbating the humanitarian catastrophe in Venezuela. They have led to more than 40,000 deaths from 2017-2018 and oil production has fallen more than 36 percent since January 2019.

The report says the economic sanctions Trump imposed in August 2017 “reduced the public’s caloric intake, increased disease and mortality (for both adults and infants), and displaced millions of Venezuelans who fled the country as a result of the worsening economic depression and hyperinflation.” In addition, “They exacerbated Venezuela’s economic crisis and made it nearly impossible to stabilize the economy, contributing further to excess deaths. All of these impacts disproportionately harmed the poorest and most vulnerable Venezuelans.”

According to the report, “Even more severe and destructive than the broad economic sanctions of August 2017 were the sanctions imposed by executive order on January 28, 2019, and subsequent executive orders this year; and the recognition of a parallel government.”

Seeking to pressure Cuba to cease its solidarity with Venezuela, Trump has slammed Cuba with more sanctions, stiffening the economic and travel blockade and activating Title III of the Helms Burton Act to allow thousands of lawsuits that will discourage tourism and investment in Cuba.

Trump has threatened Cuba with “a full and complete” embargo if it does not “immediately” stop supporting the Maduro government. Cuba called Bolton a “pathological liar” for alleging that Cuban troops are stationed in Venezuela. Cuban Foreign Minister Bruno Rodriguez stated at a news conference, “This is vulgar calumny. Cuba does not have troops nor military forces nor does it participate in military or security operations of the sister Republic of Venezuela.” Indeed, the CIA has determined that Cuba is much less involved and its solidarity is much less crucial to Venezuela than U.S. officials think, according to a former official.

The United States uses a double standard for its human rights concerns and its attacks on socialist countries.

In December 2018, Trump signed a bill levying sanctions to block Nicaragua from obtaining loans from the World Bank, the Inter-American Development Bank and the International Monetary Fund. The U.S. government is targeting Nicaragua’s Bancorp, which has ties to Venezuela.

All of these sanctions constitute collective punishment of the civilian population, which is prohibited by the Geneva and Hague Conventions. They also violate the Charter of the Organization of American States, which prohibits intervention in the internal or external affairs of another country and the use of economic or political coercive measures “to force the sovereign will of another State.”

This is not the first time the U.S. government has interfered and intervened in these three sovereign socialist countries. In 1960, responding to a secret State Department memo, the Eisenhower administration imposed an economic embargo on Cuba. The memo proposed “a line of action which, while as adroit and inconspicuous as possible, makes the greatest inroads in denying money and supplies to Cuba, to decrease monetary and real wages, to bring about hunger, desperation and overthrow of government.” The cruel U.S. economic blockade against Cuba, which continues to this day, has never led to the overthrow of the Cuban Revolution.

In the 1980s, the Regan administration illegally assisted the Contras, who sought unsuccessfully to overthrow Daniel Ortega’s socialist government in Nicaragua.

And in 2002, the CIA during the George W. Bush administration mounted a failed coup attempt against socialist president Hugo Chavez in Venezuela.

The United States uses a double standard for its human rights concerns and its attacks on socialist countries.

Meanwhile, the Embassy Protection Collective remains in the Venezuelan embassy in Washington, D.C. Members of CODEPINK and Popular Resistance have lived in the embassy for more than two weeks to protect it from a coup attempt and possible invasion by U.S.-backed opposition forces. On May 1, members of the collective fended off an attempted takeover of the embassy by forces loyal to Guaidó.

If the Trump administration were to enter the embassy to expel these people, who are present with consent of the Venezuelan government, it would violate the Vienna Convention on Diplomatic Relations. Article 22 of that treaty states, “The premises of the mission shall be inviolable.” U.S. agents are prohibited from entering the embassy without the consent of the Maduro government. The United States is also “under a special duty to take all appropriate steps to protect the premises of the mission against any intrusion or damage and to prevent any disturbance of the peace of the mission or impairment of its dignity.” And the premises, furniture and other property “shall be immune from search, requisition, attachment or execution.”

If the Venezuelan embassy in Washington is taken over by the opposition, it will have disastrous results. The Venezuelan government declared that if this happens, they will take the US embassy in Caracas. The US will view this as an act of aggression, and because it is already looking for an excuse to do so, could attack Venezuela. Because Russia and China are close allies of Venezuela, this could spark a global conflict.

Why Is Team Trump Intent on Sanctions and Regime Change?

Last month, Bolton addressed the Bay of Pigs Veterans Association on the 58th anniversary of the Bay of Pigs invasion, in which the U.S. aided and abetted a failed attempt to overthrow Cuba’s Fidel Castro. “Together, we can finish what began on those beaches,” Bolton said, adding, “We must reject the forces of communism and socialism in this hemisphere.”

It’s not simply anti-communism that animates the Trump administration’s fixation on sanctions and regime change in these Latin American countries. “With at least a half-million voters who were born in Cuba, Venezuela, Colombia or Nicaragua — and more with ancestral roots in those countries — it’s a constituency that could prove pivotal in November 2020 in a state that’s essential to Trump’s reelection fortunes,” Marc Caputo wrote at Politico.

U.S. strategies on Cuba and Venezuela intertwine in an insidious way, and Senator Rubio is pivotal in both. “Venezuela is really an extension of the position on Cuba,” according to Ricardo Herrera, director of the Cuba Study Group. The Wall Street Journal reports that both countries are part of a plan to reassert U.S. dominance in Latin America and finally destroy the Cuban Revolution.

Moreover, corporate America wants to get its hands on Venezuela’s oil. Bolton said in January, “We’re in conversation with major American companies now…. It will make a big difference to the United States economically if we could have American oil companies really invest in and produce the oil capabilities in Venezuela.”

Veterans for Peace issued a statement calling on U.S. troops to resist illegal orders to invade Venezuela, noting, “While President Trump speaks of supporting democracy in Venezuela and Latin America, the real purpose of the U.S. assault on the Venezuelan government is to fully open the vast Venezuelan oil reserves to U.S. and other Western oil corporations as well as to destroy progressive governments in Latin America that put their own peoples’ needs above the profits of foreign corporations.”

Although there is opposition to Maduro’s policies in Venezuela, people don’t want the United States to impose its will on them. Eva Golinger, former adviser to Hugo Chavez, told Democracy Now! that “certainly, there are many in Venezuela who would hope for change in their country, but they don’t want a U.S.-backed regime in place. They don’t want a far-right-imposed regime that answers to foreign interests, which is what we’re seeing take place in the country.”

On May 1, Rep. Ilhan Omar (D-Minnesota), also appearing on Democracy Now!, said, “A lot of the policies that we have put in place has kind of helped lead the devastation in Venezuela,” adding, “this particularly bullying and the use of sanctions to eventually intervene and make regime change really does not help the people of countries like Venezuela, and it certainly does not help and is not in the interest of the United States.”

Many in Congress and the corporate media walk in lockstep with the administration on its Venezuela strategy. On April 3, a bipartisan group of senators introduced a bill to recognize Guaidó as the president of Venezuela.

Instead, Congress should pass H.R.1004, the Prohibiting Unauthorized Military Action in Venezuela Act, which would forbid the use of U.S. military force in Venezuela without explicit congressional authorization. This bill is now pending in the House Armed Services and Foreign Affairs Committees. People can contact their representatives and urge them to co-sponsor and support H.R.1004.

Spread the love
This DailyClout article is the writer’s opinion.
One of our country’s most important freedoms is that of free speech.
Agree with this essay? Disagree? Join the debate by writing to DailyClout HERE.
Spread the love
Previous StoryOpinion: The Medicare for All Con Job
Next StoryBulletin Board—Stopping 5G Microwave Radiation: The May 15th National Day of Action