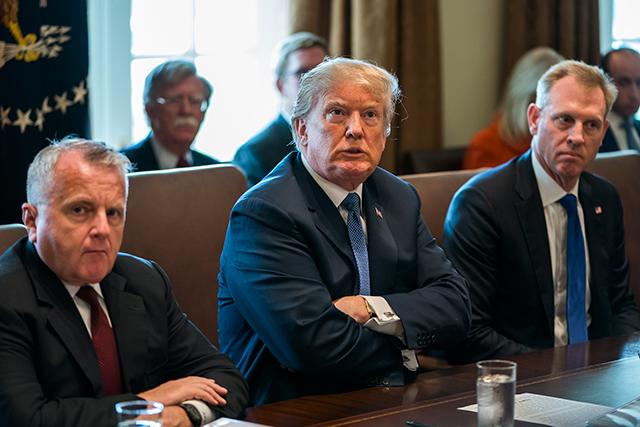 Donald Trump says the United States is about to bomb Syria, and Russia has vowed to shoot down US aircraft with missile defenses in response. With John Bolton, the new national security adviser and infamous enemy of the United Nations by Trump’s side, diplomacy is not in the cards.

Although there has been no independent investigation, Trump is blaming Syrian President Bashar al-Assad for an alleged chemical attack on Saturday in Douma, a suburb of Damascus, that killed 49 people.

As he did before bombing Syria with Tomahawk missiles one year ago — also in retaliation for an alleged gas attack — Trump is rushing to judgment about who was responsible. And once again, the military force that he’s threatening to use now would violate both the War Powers Resolution and the UN Charter.

Moreover, as a group of international law experts, including this writer, noted in a statement, “an act of violence committed by one government against another government, without lawful justification, amounts to the crime of aggression: the supreme international crime which carries with it the evil of every other international crime, as noted by the International Military Tribunal at Nuremberg in 1946.”

Bombing Syria could also lead to a dangerous confrontation with Russia. Trump tweeted early Wednesday morning: “Russia vows to shoot down any and all missiles fired at Syria. Get ready Russia, because they will be coming, nice and new and ‘smart!’ You shouldn’t be partners with a Gas Killing Animal who kills his people and enjoys it!”

Yevgeny Serebrennikov, first deputy chairman of Russia’s upper house’s Defense Committee, said Sunday that Russia would immediately respond to US airstrikes in Syria. “A military intervention under far-fetched and fabricated pretexts in Syria, where there are Russian soldiers at the request of the legitimate Syrian government, is absolutely unacceptable and could have the most dire consequences,” the Russian Foreign Ministry said in a statement.

Both Syrian and Russian authorities denied that Assad was responsible for the chemical attack.

Assad has already taken back from the rebels over 90 percent of Eastern Ghouta, which includes Douma, so it seems unlikely he would attack Douma. Moreover, Trump announced last week he intended to withdraw US troops from Syria. It is thus counterintuitive to conclude Assad would have launched a gas attack in Douma.

On April 6, 2017, Trump bombed Syria after declaring that Assad had used sarin gas at Khan Sheikhoun two days earlier. Assad had denied ordering the attack. But the Trump administration ignored all dissenting voices.

Assad’s responsibility for the 2017 attack has never been definitively confirmed. Indeed, on February 8, Defense Secretary James Mattis admitted the United States had “no evidence” that the Assad government used Sarin against the Syrian people.

Trump said the United States is “getting clarity” and “some pretty good answers” about who was responsible for the Douma attack. But no independent investigation has yet been done.

Nonetheless, Trump has signaled that he’s about to authorize the firing of missiles at Syria. That would be illegal and potentially catastrophic.

The War Powers Resolution, passed by Congress in the wake of the Vietnam War, permits the president to introduce US troops into hostilities or imminent hostilities only when Congress has declared war, when Congress has passed “specific statutory authorization” for the use of military force, or when there is “a national emergency created by attack upon the United States, its territories or possessions, or its armed forces.”

None of these three prongs is present to justify the use of military force in Syria. Congress has neither declared war nor passed legislation authorizing a US attack on Syria, and Syria has clearly not attacked the United States or US armed forces. As a result, a military attack on Syria would run afoul of the War Powers Resolution.

The Trump administration justified its 2017 bombing of Syria by citing the president’s commander-in-chief authority under Article II of the Constitution “to defend important US national interests.” But Article II gives the president power to command the US military only after Congress has authorized war pursuant to its Article I authority.

Even if an attack by Trump on Syria did not violate the War Powers Resolution, it would still violate the United Nations Charter. The United States has ratified the Charter, making it part of US law under the Supremacy Clause of the Constitution, which states that treaties shall be the supreme law of the land.

The Charter says that countries “shall refrain in their international relations from the threat or use of force against the territorial integrity or political independence of any state.”

A country can mount a military attack against another country in self-defense after an armed attack or if the Security Council has authorized it. Neither has occurred in this case.

Syria has not attacked the United States or any other country. “The use of chemical weapons within Syria is not an armed attack on the United States,” according to international law expert Notre Dame law professor Mary Ellen O’Connell.

Nor has the Council granted the United States license to use military force against Syria. Staffan de Mistura, the UN Special Envoy for Syria, called for compliance with resolution 2401, passed on February 24, 2018, in which the Council demanded an immediate cessation of hostilities to enable humanitarian assistance and medical evacuation. Resolution 2401 ends by stating that the Security Council “Decides to remain actively seized of the matter.” That means the Council — and only the Council — has legal authority to order any measures, forceful or otherwise.

Any military attack that Trump would launch against Syria would therefore violate the Charter. In fact, under Article 51, Assad would have a valid self-defense claim in the event the United States initiated an armed attack on Syria. Russia could also mount airstrikes in collective defense of Syria.

In a tweet, Trump decried the “humanitarian disaster” created by the gas attack in Syria. But “humanitarian intervention” is not an established norm of international law. The use of military force is lawful only in self-defense or with Security Council approval. Neither is present in this case.

Bombing Syria Could Lead to a Dangerous Confrontation With Russia

CNN Turk reported that a US Navy destroyer — the USS Donald Cook — armed with 60 Tomahawk cruise missiles is now located off the coast of Syria. A Navy source confirmed that report to the Washington Examiner, saying the destroyer “got underway in the eastern Mediterranean within range of Syria Monday.”

Russian leaders warned that any use of military force by the United States would have “grave repercussions.”

Last month, Russian government officials threatened to respond with military force if Trump were to attack Syria and thereby endanger the lives of Russian soldiers stationed there. “In the event of a threat to our military servicemen’s lives, Russia’s Armed Forces will take retaliatory measures to target both the missiles and their delivery vehicles,” Russian Army Gen. Valery Gerasimov warned.

What Should Be Done?

But Nikki Haley, US ambassador to the UN, declared that the United States would act against Assad, with or without the United Nations.

There is already an established body that has launched an investigation into the allegations of chemical weapons use in Douma. The Organisation for the Prohibition of Chemical Weapons (OPCW), with support from Russia and Syria, is gathering and analyzing data from all available sources. OPCW’s Director-General, Ambassador Ahmet Üzümcü, is preparing to deploy a fact-finding mission team to Douma to investigate.

Immediately after Trump announced that the US bombing of Syria was imminent, Maria Zakharova, Russian Foreign Ministry spokesperson, wrote on Facebook, “Smart missiles should fly toward terrorists, not the legal government that has been fighting international terrorism for several years on its territory.”

Zakharova added, “By the way, were the OPCW inspectors warned that smart missiles will destroy all evidence of chemical weapons use on the ground? Or the whole idea is to quickly cover up the traces of provocation through the smart missiles, so the international inspectors have nothing to look for as evidence?”

There are several alternatives to bombing or attacking Syria. The Friends Committee on National Legislation has proposed a four-point plan, which includes full US support for the OPCW investigation; a congressional vote against any further US military action in Syria; a meeting between the United States, Russia, Iran, Turkey and the Gulf States to revive international negotiations toward a diplomatic solution; and the United States promptly increasing its settlement of Syrian refugees.

Dueling US and Russian airstrikes in Syria would exacerbate regional conflict and could lead inexorably to a global war.

UPDATE: On April 13, the United States, France and the United Kingdom bombed three sites in Syria that are allegedly related to the production of chemical weapons. Marjorie Cohn is professor emerita at Thomas Jefferson School of Law, former president of the National Lawyers Guild, deputy secretary general of the International Association of Democratic Lawyers and an advisory board member of Veterans for Peace. The second, updated edition of her book, Drones and Targeted Killing: Legal, Moral, and Geopolitical Issues, was published in November. Visit her website: MarjorieCohn.com. Follow her on Twitter: @MarjorieCohn