Opinion: “The Game of Party and Patriotism in Hong Kong” 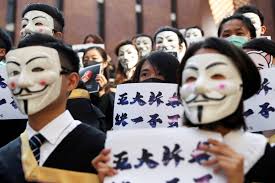 During the video broadcast of the annual duty report by Hong Kong Chief Executive Carrie Lam, Chinese President Xi Jinping has announced that Hong Kong “must always be governed by patriots”. He asserted that “patriotic” politicians were the precondition to the implementation of Chinese Central Government’s comprehensive jurisdiction over Hong Kong, and the ‘preservation’ of its Constitution and Basic law mandates. The broadcast happened few days after the current pro-Beijing Hong Kong Government arrested every single pro-Democracy candidate for upcoming Legislative Council elections. These candidates have reportedly been charged with ‘subversion’ under the newly minted National Security Law (NSL).

His statements are close in line with stance of the Chinese Government to implement an education system that was in line with what they define as “patriotic”. With implementation of NSL and pro-Democracy movement being systematically suppressed. February saw two important developments in this regard. First, Hong Kong’s Education Bureau has brought out some controversial guidelines for schools, providing for teaching students as young as six about ‘foreign interference’ and “subversion” under a new national security curriculum. Similarly, the Chinese University of Hong Kong (CUHK) has threatened its students and student bodies with penalties if they participate in activities that “endanger national security” or “advocate or commit unlawful acts”. The NSL has also started to become a deterrence against formation of student unions; according to a report by HKFP, five of the city’s eight universities unable to elect a student representative body due to a lack of people willing to run.

The suppression of pro-democratic political class, along with Beijing openly positioning its supporters in Hong Kong Government may have contributed to a new political player in Hong Kong. The Bauhinia Party, named after the orchid that adorns Hong Kong’s flag, was founded by three Western educated businessmen whose homeland is Mainland China, but are currently permanent residents of Hong Kong. The party was reportedly green-lighted by China after they “consulted with officials in the Hong Kong government, the Liaison Office (body established by Beijing to oversee the city affairs) and other relevant offices in China”. According to an interview of Wong Chau-Chi (one of the party’s co-founders), the party was set up to “support people to stand for position of chief executive”, after Carrie Lam’s first term expires, although it will likely not contest in September’s Legislative Council elections as they are “not ready” for them.

What is interesting about the party, however, are the conflicting ideals it claims to represent. On one hand, Bauhinia Party seems to espouse “respect ‘one country,’ cherish ‘two systems,’ and safeguard Hong Kong’s core values of freedom, democracy and rule of law”, all of which are what moderate pro-democracy leaders have been fighting for in Hong Kong. However, their view on pro-democratic movement itself parrots Beijing’s rhetoric. For instance, Wong Chau-Chin in his interview said that the root causes of the 2019 protests had “nothing to do with China”, and blamed factors such as high-priced housing, poor local governance and an opposition he said was “tearing apart the social fabric and getting everybody angry” for the unrest. The party endorses several Beijing’s proposals regarding Universal Suffrage, inclusion of Mandarin in schools, and reformation (even abolition) of the LegCo. Bauhinia has also shown support to NSL, calling it a timely intervention to ‘stabilize Hong Kong’, and have tried to decouple it from the 2019 protests.

Another reason behind scrutiny over the party is the fact that while they have obvious connections to Communist Party of China, the party leadership has continued to skirt around the topic in media, or given vague, non-definitive statements regarding it. Li Shan and Wong Chau-Chi are president and consultant respectively at Chinese Academy of Governance Industrial and Commercial Professionals Alumni Association (CAGA), which reportedly has close ties with Beijing’s office in Hong Kong. Wong Chau-Chi, on question of his party’s links with Chinese Communist Party, asserted “It’s not correct to judge our party [on] whether we have underground members or not. And we never really asked our members whether you are underground [members] or not”, further saying that any question on CCP’s backing for new party was the “wrong way” to look at the matter.

However, in light of the quick approval for set up of the party, along with the neutralization of an entire front of Hong Kong politics and the fact that any view contrary to CCP’s leads to incarceration in current Hong Kong does raise questions regarding the purpose this new party may serve in CCP’s game plan for the city. As per a New York Times report, the pre-existing pro-Beijing bloc in Hong Kong has not taken emergence of this new player well; to them, the existence of Bauhinia party means that China has less need for their support. After all, with pro-democracy legislators gone from LegCo and its supporters seamlessly curtailed by NSL, people are wondering why there is no need for China to use pro-Beijing parties in Hong Kong for leverage.

However, even as Pro-establishment bloc and Bauhinia Party squabble for CCP’s patronage, China has expanded its control on Hong Kong through means that go beyond LegCo. China has started moving staunch CCP stalwarts in important position of powers within Hong Kong, irrespective of their qualification for holding the job. Luo Huining, the new chief of Beijing’s Liaison office, is a top CCP official who has zero experience with Hong Kong. Shi Kehui, a recent appointee to the central government-controlled Hong Kong and Macau Affairs Office, has also worked closely with Xi Jinping’s allies in Mainland China, and had not been associated with Hong Kong till this assignment. These offices themselves have also expanded in scope and power, to the extent that Liaison Office is called a “shadow government” of Hong Kong.

In the end, one thing is clear: the face of politics and definition of “patriotic” in Hong Kong is on its way to be irrevocably changed, with China holding the reigns of the forces old, and new.

Dr. Jianli Yang is Founder and President of Citizen Power Initiatives for China

Dr. Jianli Yang is founder and president of Citizen Power Initiatives for China. The recipient of multiple international human rights, democracy and academic awards, Dr. Yang is an internationally recognized major leader and architect of democracy for China