Opinion: “Even With A Vaccine, We Still Need Rapid Tests To End Covid-19 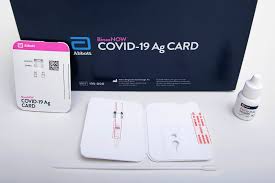 Yesterday, an independent FDA advisory panel gave Pfizer’s Covid-19 vaccine—already approved in Britain, Canada, and Saudi Arabia—its vote of confidence, setting it up to be authorized as early as this weekend for emergency use in the United States. Their recommendation extends to anyone age 16 and over, with health workers and long-term care residents first in line to get vaccinated.

Sadly, the approval of a vaccine will not mark the beginning of the end of the pandemic in this country or any other—not if the public health measures we’ve mounted against the disease are left in their current state of dysfunction and disrepair. One intervention that is absolutely critical, yet in the US still severely lacking, is rapid testing. Beyond social distancing, mask wearing, and frequent handwashing—beyond the vaccine itself—rapid testing is what can give us the momentum we need to outmaneuver the virus that, up until now, has bested us at every turn.

Imagine if, in households across the country, every parent could test themselves for Covid-19 before going to work, and every child before going to school. Imagine if schools could test every student and teacher, and if workplaces could do the same for their employees—within minutes, not days. State-sponsored rapid testing initiatives, whether they’re for schools in Tennessee or small businesses in Texas, are on the rise. But without the full force of federal policies and funds behind them, such programs simply cannot be as effective or far-reaching as they could and should. They also can’t provide households the economic support they need to isolate comfortably at home if one member tests positive.

Rapid, self-administered Covid-19 tests should be available to anyone who asks for them. The tests themselves exist, some as easy to use as a pregnancy test and accurate enough to detect more than 95 percent of those contagious. The manufacturing capacity to produce more than 50 to 100 million tests per day also exists—and the components required for assembly, cheap enough that they could be produced and potentially sold for less than 50 cents each, as demonstrated by the universal screening program that eradicated hepatitis C in Egypt. Rapid tests are so handy that one hospital in Latvia even has plans to install a vending machine that dispenses them, the first of 100 to be distributed all over the country.

Beyond convenience and affordability, the benefits of rapid testing are well-documented. Widespread rapid testing, a recent UK study found, reduced the spread of Covid-19 in Slovakia by about 60 percent in just one week when combined with economic support for those who test positive and cannot work. Similarly steep declines in case counts have been observed in Liverpool following the launch of mass testing. In Austria, a successful new pilot program that dispatches mobile rapid testing teams to schools in at-risk areas will be expanding nationwide this month. And rapid testing at college campuses across the US has been so fruitful that some are partnering with local health authorities to broaden access to the wider community.

The failure of the United States to provide these tests to all its citizens, many months into the pandemic, is multilayered. First and foremost was the failure at the highest levels of federal government to understand the power of rapid testing in curbing the spread of Covid-19. Even when the US administration buckled down and bought up hundreds of millions of rapid tests in August, they still failed to devise a national strategy for distributing the tests efficiently and intelligently. If the federal government issues an RFP (request for proposal) to build these tests, the industry would respond immediately.

Next was the failure of our federal agencies and health authorities. The NIH and Operation Warp Speed failed to put the same weight behind the development of rapid tests as they did vaccines, while the FDA failed to devote sufficient capacity to reviewing and approving low-cost, self-administered models. The failure extends to other branches of the government as well. Congress failed to include provisions in emergency relief bills that would either cover or drive down the cost of rapid tests. Were tests priced at 50 cents a pop, the budget for administering around 150 million tests per day for three months would amount to $7.5 billion—a small and necessary fraction of the trillions the pandemic is currently costing us.

This is not a new call, and I am not alone. But the voices calling for such tests, mine just one among many, have been ignored—to the anguish of tens of millions of parents, children, and US citizens who now endure, if not infection from Covid-19 itself, long waits in the bitter cold for a single test and even longer turnaround times for their results. The difference between now and several months ago, when advocacy for rapid testing first began, is that our situation is considerably more desperate—a fact that isn’t likely to change once a vaccine has been rolled out. With adequate financing and a robust national strategy, rapid, self-administered testing could stem the ever-surging tide of disease and death. If only those who have the power to produce and supply this simple tool would wield it. Though it has taken far too long, it’s not too late.

This article was originally published on Forbes.com. Reprinted with permission.

William Haseltine, PhD, is chair and president of the global health think tank, ACCESS Health International. He is author of numerous books, including his recently released autobiography, “My Lifelong Fight Against Disease: From Polio and AIDS to Covid-19”

Spread the love
Spread the love
Previous Story“State Bills Exposé: NYS Assembly Bill A99 – Relates to The Removal of Cases, Contacts and Carriers of Communicable Diseases That Are Potentially Dangerous to The Public Health”
Next StoryOpinion: “Respect America’s Democratic Choice”