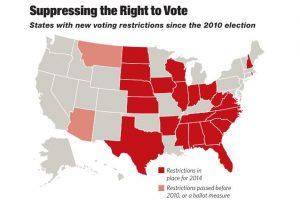 Greg Palast and his Palast Investigative Fund team retained five consulting firms expert in the field of Advanced Address List Hygiene to analyze the Wisconsin purge list.
They found 39,722 Wisconsin voters who supposedly moved from their registration addresses, who, in fact, had not moved, a minimum 25.8% error rate.
They identified a further 58,404 or 38% who had moved, but only within their county.
If even half of these moved locally, the error rate rises to 45.8%.
(Wisconsin law and the National Voter Registration Act prohibit cancelling the registration of those who move within their voting jurisdiction.)
Learn more at: https://www.gregpalast.com/report-wisconsin-movers-voter-purge-list-errors/
Is your name on the Wisconsin purge list? Find out at: https://www.savemyvote2020.org/wisconsin-voter-purge-list-2020/
Watch Greg Palasts film HERE.
Spread the love