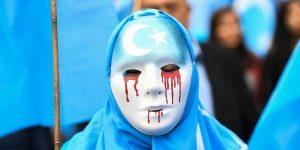 A large coalition of religious leaders, scholars and human rights advocates urge Congress to ensure American dollars are not funding oppression in China.

A coalition of 150 organizations, religious leaders, scholars and human rights advocates who are participants in the International Religious Freedom (IRF) Roundtable   (www.irfroundtable.org)in Washington, DC, sent a signed multi-faith letter https://www.dropbox.com/s/bqr1dby8koyqxyg/IRF%20RT%20Uyghur%20Forced%20Labor%20Prevention%20Letter%20-%20Final.docx?dl=0
to Members of Congress imploring them to support the Uyghur Forced Labor Prevention Act (H.R.6210/S.3471). The letter briefly stated the situation of oppression in China and urged the Members to contact Representative Jim McGovern (D-MA) and Senator Marco Rubio (R-FL), the sponsors of the bills. The coalition praised Congress this week for passing the House Bill H.R. 6210 and turned its advocacy to the Senate.

The letter exposes forced labor programs, a chilling component of the Chinese Community Party’s (CCP) brutal campaign of repression of the Xinjiang region’s Muslim ethnic group in northeast China. It is estimated that over 1 million Muslims are in “reeducation” camps, separated from families, receiving enforced indoctrination and experiencing torture. The spread of the persecution is not only in the camps but throughout the area.

Reports in the form of firsthand accounts, video footage and studies have been leaking out of China over the last decade regarding the ever-increasing suppression of the Uyghur religious/ethnic population. In August 2019, our organization Citizen Power Initiatives for China released a report, “Cotton: The Fabric Full of Lies” (https://www.amazon.com/Cotton-Fabric-report-Xinjiang-Monograph-ebook/dp/B07VSJHNGZ) which finds that there is presence of forced labor at many steps of the cotton supply chain and some of these products have entered into international commerce, including the U.S. and European markets.  In March 2020, the Australian Strategic Policy Institute (ASPI) published a report, “Uyghurs for sale: ‘Re-education’, forced labour and surveillance beyond Xinjiang,” which identified 83 foreign and Chinese companies as allegedly, directly or indirectly, benefiting from the use of Uyghur workers outside Xinjiang through potentially abusive labor transfer programs.

On March 1, 2020, the Australian Strategic Policy Institute issued a lengthy report stating, “Under conditions that strongly suggest forced labour, Uyghurs are working in factories that are in the supply chains of at least 82 well-known global brands in the technology, clothing and automotive sectors, including Apple, BMW, Gap, Huawei, Nike, Samsung, Sony and Volkswagen.” https://www.aspi.org.au/report/uyghurs-sale

In response to documentation and information about the horrific violations occurring, many faiths and religious freedom organizations including 21Wilberforce, Anti-Defamation League, Boat People SOS, Campaign for Uyghurs, China Aid Association, Church of Scientology National Affairs Office, Citizen Power Initiatives for China, Indian American Muslim Council, Institute on Religion and Democracy, International Christian Concern, Jubilee Campaign, Southern Baptist Ethics & Religious Liberty Commission and more than 100 others, signed onto a letter urging the US Congress to take actions regarding US trade in the area. These groups and others work together regularly on religious freedom persecution issues around the world as participants of the International Religious Freedom (IRF) Roundtable.

“The Congressional Working Groups of the IRF Roundtable have been engaging tirelessly with Members of Congress informing them of the atrocities committed by the CCP against the Uyghur Muslims. The working group was thrilled by the unprecedented level of support that the multi-faith initiative received from various religious and nonreligious organizations, and praised Congress for passing the Bill on September 22nd,” commented Matias Perttula, Advocacy Director, International Christian Concern and Co-chair of the IRF Roundtable’s Congressional Working Group.

Rev. Susan Taylor from the Church of Scientology National Affairs Office in Washington, DC, an active member of the IRF Roundtable, added, “It is up to each of us to continue to stand up for those who cannot speak out for themselves. Religious and ethnic suppression must cease in China. This legislation will be but one step.”

The multi-faith letter argues that the Uyghur Forced Labor Prevention Act would safeguard American consumers from unwittingly supporting the CCP’s oppression. Key provisions of the act would create the presumption that goods produced in the Xinjiang Region are made with forced labor and prohibited from importation into the U.S. under the Tariff Act of 1930, unless there is “clear and convincing evidence” that the goods were not made with forced labor. It would also hold foreign parties accountable by enabling sanctions on those who knowingly participate in the importation of the products emerging from forced labor.

Scores of reports, firsthand and otherwise, on the torturous situation of the Uyghurs in the Xinjiang Region have come out from the US State Department, US Commission on International Religious Freedom, the Uyghur Human Rights Project, and the Business & Human Rights Resource Centre, as well many media outlets including ABC TV News in Australia and the New York Times.

China, an original signatory to the United Nations Universal Declaration of Human Rights (https://www.humanrights.com/what-are-human-rights/universal-declaration-of-human-rights/) in 1948, continues to flagrantly violate the document’s very principles despite publicly endorsing it on the Declaration’s 60th Anniversary in 2008.

The Chinese government demonstrated its growing concern about the international community’s response last week, issuing a White Paper that attempts to whitewash its responsibility for ongoing atrocities in East Turkistan.

Preventing importation of forced labor products is a critical tool for policymakers globally, to counter the CCP’s genocidal repression of the Uyghur people.

Dr. Jianli Yang is founder and president of Citizen Power Initiatives for China. The recipient of multiple international human rights, democracy and academic awards, Dr. Yang is an internationally recognized major leader and architect  of democracy for China.