Missouri Courts Have Just Ended ALL The State’s Covid Measures 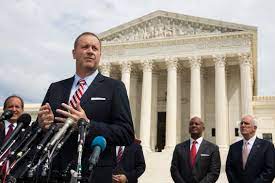 Missouri citizens have a lot to be thankful for today. In a remarkable, strongly-worded opinion, the Cole County Circuit Court of Missouri just ended ALL the state’s Covid measures. In Shannon v. Missouri Department of Health, the Court found that the Department of Health’s regulations CANNOT “abolish representative government in the creation of public health laws,” and CANNOT “authorize closure of a school or assembly based on the unfettered opinion of an unelected official.”

While we’ve seen other favorable court decisions lately, this one is a true breakthrough. It moves the bar. The Court didn’t just find a technical reason to set aside the DOH’s emergency rules. Instead, the Court found that the ORIGINAL state statutes giving the DOH its emergency authority were themselves completely invalid, for four separate reasons, because the statutes:

3) are inconsistent with other public health laws; and

The Missouri Court doesn’t think it’s particularly complicated. “[DOH] regulations break our three-branch system of government in ways that a middle-school civics student would recognize, because they place the creation of orders or laws, and enforcement of those laws, into the hands of an unelected official.”

The Court cited a 2020 Michigan Supreme Court case: “It is incumbent on the courts to ensure decisions are made according to the rule of law, not hysteria … One hopes that this great principle — essential to any free society, including ours — will not itself become yet another casualty of Covid-19.” It looks like that great principle has NOT become a casualty.

The Court found that the Missouri emergency health statutes were constitutionally flawed because they create “double delegation.” The judge said the state had delegated rulemaking power to the DOH, which then delegated “broad rulemaking power to an unelected official.” This type of double delegation, said the Court, “is an impermissible combination of legislative and administrative power.” It also explained that the regulations “violate the principle of separation of powers by unlawfully placing unguided and unbridled rulemaking power in the hands of a public official.”

The judge cited, among other cases, Florida’s lawsuit against the CDC’s “conditional sailing order.” Relying on the cited cases, he listed all the ways that the state’s public health statutes violated separation of powers:

2) the laws failed to provide any STANDARDS to guide local emergency orders;

3) the laws not only provided no standards, but they are “limitless, standardless, and lack adequate legislative guidance;”

4) the laws fail to “provide any procedural safeguards for those aggrieved by the orders;” and

5) they “create a system of statewide health governance that enables unelected officials to become accountable to no one.”

I think he just described a biomedical dictatorship. The judge wrote that plaintiff Robinson had produced “ample evidence” that local health supervisors used the emergency health laws to “exercise unbridled and unfettered personal authority to, in effect, legislate.”

He described the whole disgusting mess. “Local health directors have created generally applicable orders, both in writing and verbally, requiring individuals within their jurisdictions to wear masks, limit gathering sizes in people’s own homes, creating capacity restrictions, limiting usage of school and business facilities including tables, desks, and even lockers, mandating spacing between people, [and] ordering students be excluded from school via quarantine and isolation rules created by health directors based on masking or other criteria not adequately” constrained by legal standards.

The Court held that the statutes’ authorization of local health directors to create and enforce their own orders, and take other “control measures” were “unconstitutional and … therefore invalid.”

A mockery! Finally. A court said it.

The judge concluded by saying, “Missouri’s local health authorities have grown accustomed to issuing edicts and coercing compliance. It is far past time for this unconstitutional conduct to stop.”

The Court’s actual orders, what he then ordered various Missouri agencies to do as a result of his opinion, was the best part. The orders go on for two pages. Among other things, the judge instructed the Secretary of State to “remov[e] the invalid regulations from the register” — which effectively deletes all the state’s emergency public health statutes. He also ordered the Missouri DOH to “provide a copy of this order to all local health authorities throughout Missouri, and to post it … in locations where the same is made publicly available[.]” Haha!

Then he ordered the Department of Health to pay all the plaintiff’s attorney’s fees! A trifecta win.

It really is impossible to underestimate how important this ruling is. The combination of a smart judge with smart lawyers who litigated well has now provided a roadmap for other citizens to push back on the never-ending, mushrooming emergency orders in their own states. The reasoning is solid, persuasive, and should easily travel to other states.

We need to share the news of this order as far and wide as we can. I don’t say that very often.