November 29, 2021 • by Hundreds of Lawmakers Representing 33 States Of The Union 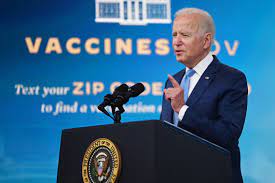 On December 4th, 2020 you were asked in front of America on national television, “do you want vaccines to be mandatory?” You responded, “No, I don’t think it should be mandatory. I wouldn’t demand it be mandatory…”

But on September 9th, 2021 you did just that. You issued unconstitutional and immoral edicts to force employers and employees to take a COVID vaccine. Your actions strike at the very heart of our system of governance, as you are attempting to bypass not only the consent of the governed through the will of the People but the foundational limitations on federal power enshrined in our Constitution itself. Your edicts go against everything our country stands for.

We cannot and will not stand by while Americans are being forced to choose between a jab and a job. No one should be forced to take a COVID vaccine against their will. And no President has the power to require that American citizens undergo a medical procedure of his whim. This brazen assault on our freedom is to be taken in the most serious terms. Therefore, we demand you immediately cease and desist all efforts to mandate the COVID vaccination.

We applaud and stand by the recent rulings of the Fifth Circuit U.S. Court of Appeals as they called the vaccine requirement “fatally flawed” and “staggeringly overbroad.” As they said, it is a “one-size-fits-all sledgehammer that makes hardly any attempt to account for differences in workplaces.” But since that ruling you have directed federal agencies to essentially ignore the hold issued by the Fifth Circuit Court of Appeals.

Attorneys General and Governors across our country have taken legal action and other measures to stop your egregious acts against the People of the United States of America. We stand alongside them to oppose your lawlessness.

Americans losing their jobs is completely unnecessary. It is especially cruel to do this to people during the Thanksgiving and Christmas season. Many are set to lose their jobs if they don’t comply with your edicts by the first week in December.

We are calling for businesses and healthcare facilities to ignore your unconstitutional acts. While the federal government controls CMS (Centers for Medicare and Medicaid Services), you must realize that the funds which Medicare and Medicaid use ultimately come from the American people. As Americans, we all pay into those services. To deny the reimbursement of those funds is evil and will have dire consequences on patient care. It will cause even more people to die. How can you say this mandate is for the safety and health of our country, when it places our medical system in the balances?

Our healthcare heroes have worked tirelessly through the COVID pandemic with limited staffing. Healthcare facilities including nursing homes and hospitals stand to lose around 40%-60% of their staff in some of our respective states because of your mandates. We simply will not stand by and allow this to happen.

This also could become an issue of national security as military, guard members, and contractors of national security and nuclear sites are being forced to choose between a vaccine and their job. It could potentially leave nuclear materials vulnerable in our country. We are already seeing compromised situations.

Many of our state governments have encouraged economic development by supporting companies that retain and hire employees and building and expanding business. Now both employers and employees are under attack. No free person should have to take this vaccine against their religion, their medical decisions for their own bodies, and their natural rights which are enshrined in the United States Bill of Rights and in our State Constitutions.

There are undoubtedly limitations on terms of employment. We have laws in society to protect free individuals. What may be legal is not always right. Our laws recognize for example that there are certain discriminatory practices in which a business must not engage. If people have certain unalienable rights and there is inherent value in humanity, then slavery is morally wrong. It is in this same sense that holding someone slave to a vaccine in order to provide for their family is fundamentally flawed.

The Ninth and Tenth Amendments to the United States Constitution recognize that powers not enumerated in the Constitution are retained by the States and the People thereof. These amendments are arguably the most important parts of the United States Constitution because they recognize that authority rests with the States. In response to the Alien and Sedition Acts of 1798, Thomas Jefferson wrote the Kentucky Resolutions, which argued that states have the right to void federal legislation that goes beyond the limits of the Constitution. In 1799, James Madison wrote similar legislation known as the Virginia Resolutions.

As Americans, we should remember the spirit of the men who defended Fort Sullivan from the British bombardment in June of 1776. One patriot, Sgt. McDaniel was hit in the torso by a cannonball. His last dying words were “…do not let liberty expire with me today!” The events in South Carolina would inspire the signing of the Declaration of Independence, and ultimately our country’s victory in the American Revolution. Our ancestors obtained our liberty on these shores; it is up to us to preserve it.

The Declaration of Independence states, “We hold these truths to be self-evident, that all men are created equal, that they are endowed by their Creator with certain inalienable Rights, that among these are Life, Liberty, and the Pursuit of Happiness. To secure these rights, Governments are instituted among Men, deriving their just powers from the consent of the governed…”

What does the “consent of the governed” actually mean? If ‘We the People’ are being forced to make a medical decision against our own volition, then these actions are no longer about consent. They are about force. Not only that, but force from a federal executive authority – unnecessary force that has not only bypassed our representation in Congress, but also bypassed our humanity.

Both Thomas Jefferson and James Madison advised the States to use interposition as a mechanism to defend liberty from federal tyranny. In Federalist #46 James Madison described this “anti-commandeering” principle as a “refusal to cooperate with officers of the Union.” Simply put, the States can bar agents from enforcing or assisting in unconstitutional federal acts. The concept of the “anti-commandeering doctrine” has a solid legal basis with five U.S. Supreme Court cases dating back to 1842. In 1997, the “anti-commandeering doctrine” was notably articulated by Justice Scalia in Printz v. United States, and was most recently upheld as of 2012 in NFIB v. Sebelius.

In the 1905 case of Jacobson v. Massachusetts, the U.S. Supreme Court ruled that “it is within the police power of a State to enact a compulsory vaccination law, and it is for the legislature…to determine.” This matter is not for the federal government to decide, if anything it is a State and local issue. We would go further to say that it is an individual decision.

Therefore, we wish to inform you that we hold your vaccination mandate as void. We put you on notice that the States are reinserting themselves between the federal government and the People of the United States in order to defend the freedoms and jobs of all Americans. Please know that we will use every lawful means at our disposal to obstruct, frustrate, and reject your illegal mandate.

Be it Resolved, We as members of the State Legislatures demand that you immediately rescind the aforementioned orders, restoring the proper resolution of these matters to the States in respect for the many intricacies of their jurisdictions, the framework of the United States Constitution, and the personal freedom of every American.

For the future of liberty,-UNITED STATE LEGISLATORS OF AMERICA

Spread the love
Spread the love
Previous StoryMUSIC VIDEO: “Pink for My Money”
Next StoryMissouri Courts Have Just Ended ALL The State’s Covid Measures