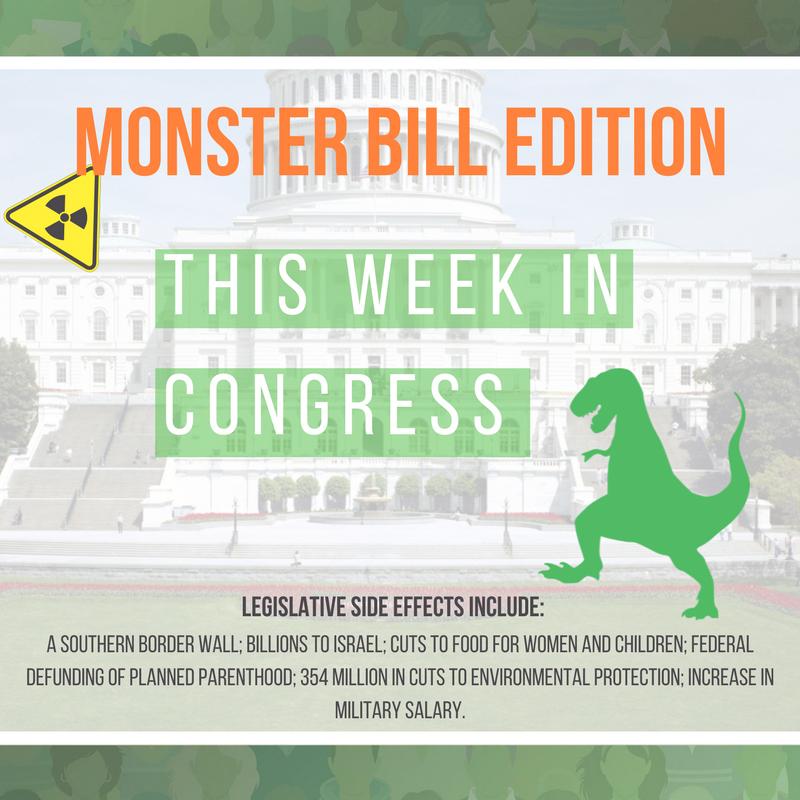 Here’s the legislative calendar for the week of Monday, September 11, 2017- including a special MONSTER BILL ALERT!

H.R. 3219 is “12 BILLS IN ONE”: $1.57 BILLION TO BUILD A SOUTHERN BORDER WALL; $3.1 BILLION TO ISRAEL; CUTS TO FOOD FOR WOMEN AND CHILDREN; FEDERAL DEFUNDING OF PLANNED PARENTHOOD; 354 MILLION IN CUTS TO ENVIRONMENTAL PROTECTION. This bill is the appropriations legislation for the 2018 fiscal year. The bill funds President Trump’s border wall with Mexico, and strengthens our military, according to its Republican supporters in the House.

It is the first step in a long budget process, but Republicans have done one thing that makes this bill different than those of the past. Usually, the House and Senate begin by debating the items on twelve different appropriations bills; then, the twelve bills are combined to make what’s called an ‘omnibus bill.’

What does this unusually slim appropriations bill cover? A TON of changes.

THE BORDER WALL – It allocates $1.57 billion for construction of the Southern border wall.

OBAMACARE – Prevents the IRS from implementing the individual insurance mandate. The bill also contains several provisions to stop the implementation of the ACA.

DACA – The bill does not include any language regarding the recently repealed program, DACA.

ISRAEL – $3.1 billion commitment to Israel, marking the last year of the current 10-year memorandum of understanding between the United States and Israel which totaled $30 billion.

CLEAN WATER ACT – Lessens the scope of what is determined “protected waters” by withdrawing from the Waters of the United States rule, a measure from within the Clean Water Act (CWA).

GITMO – The bill continues to prohibit the transfer of Guantanamo detainees into the U.S.

ABORTION – Prevents the use of funds for abortion in the Federal Employee Health Benefits program, continues the prohibition of U.S. assistance to any entity that promotes or performs abortions, and prevents funding for the UN Population Fund. It also makes family planning programs voluntary.

Using this “12-in-1” bill, the House will negotiate funding with the Senate; Both must pass the same bill before they can send it to the President Donald Trump to be signed into law. The deadline for these negotiations ends on December 8, 2017.

Spread the love
Spread the love
Previous StoryFree Speech or Safety on Campus: Why Do We Have To Choose?
Next StoryMarjorie Cohn: Will Judge Overturn Arpaio Pardon?