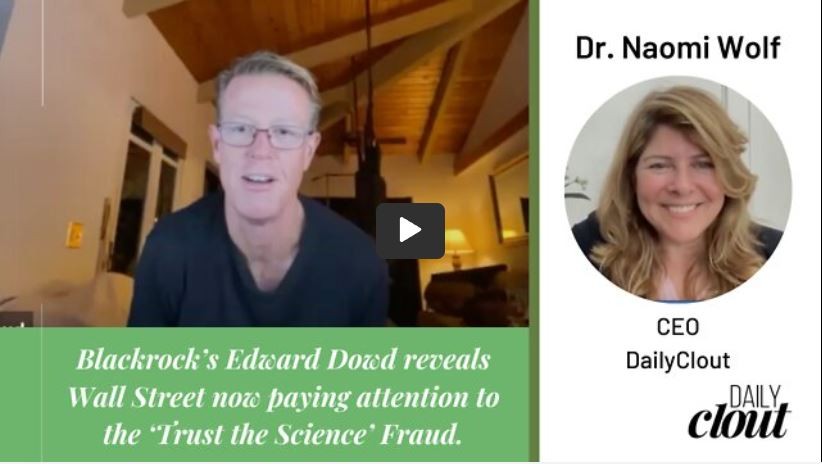 Dr. Naomi Wolf of the Daily Clout hosted Mr. Edward Dowd, former Blackrock portfolio manager for a 2nd conversation yesterday. Watching the two of them piece together this insane vaccination puzzle is an amazing thing to observe. We must appreciate that while big players on the Internet have forced people like them mostly underground, the Internet itself is still a miraculous tool without which the public would have no chance of pulling back the curtain of propaganda and figuring things out for ourselves.

Mr. Dowd presented his theory regarding the mass vaccination program that he arrived at using a combination of factors and sources. Dr. Wolf and her team have been able to back Mr. Dowd’s theories with evidence of fraud and coverups that they’ve begun to uncover in the trove of FDA documents that have been released so far. The two of them together are a powerhouse that is shifting the Overton Window with herculean efforts.

The Current Fraud is “Trust the Science”

Mr. Dowd spent 10 years at BlackRock where he and his team managed to take 2 billion dollars and turn it into 14 billion dollars by capturing a large portion of the market share. He’s seen many frauds perpetrated throughout the years, along with a mass psychosis that allowed the fraud to go on as long as it did. He gave 3 main examples of frauds that he worked through and had been able to anticipate:

Thesis of the current scientific fraud: The clinical data of the Covid-19 vaccines is corrupt and fraudulent. Attempting to conceal the data for 75 years is another form of fraud as well.

The Arc of a Fraud

There’s an arc to every fraud. The fraud grows and those responsible for it profit, until they eventually reach what Mr. Dowd calls an “inflection point” and then the tide turns. He’s ahead of the herd with this thesis, as he was with theses in the past which led to his professional success. In his world of financial forecasts and data analysis, he doesn’t need to wait for journalists at the New York Times to report on an event in order to formulate a thesis and act on it.

While we all know that the mainstream media is still completely ignoring what many would consider the greatest humanitarian scandal in history, Wall Street IS beginning to think about acknowledging this unfolding disaster.

Mr. Dowd explained that while Pfizer’s stock seems to be resilient, he believes it’s at its peak and it will eventually break its prior low of 46. Over the course of their conversation, Dr. Wolf repeatedly expressed the disbelief and confusion that a lot of us are feeling. It’s hard to stop asking “But WHY” over and over when we think about what possessed so many people to knowingly push leaky and harmful vaccines to as many people as they possibly could, knowing the potential repercussions. Mr. Dowd did a great job filling that gap by explaining the way a fraud functions, the way a criminal mind operates, and the possible reasons behind it from a few different perspectives.

Spread the love
Spread the love
Previous StoryWhat Did Pfizer and the FDA Know and When? Dr Wolf Explains Court-Released Pfizer Documents
Next StoryUniversity of Ottawa Drops COVID Jab Mandate After Pressure from Canadian Rights Group