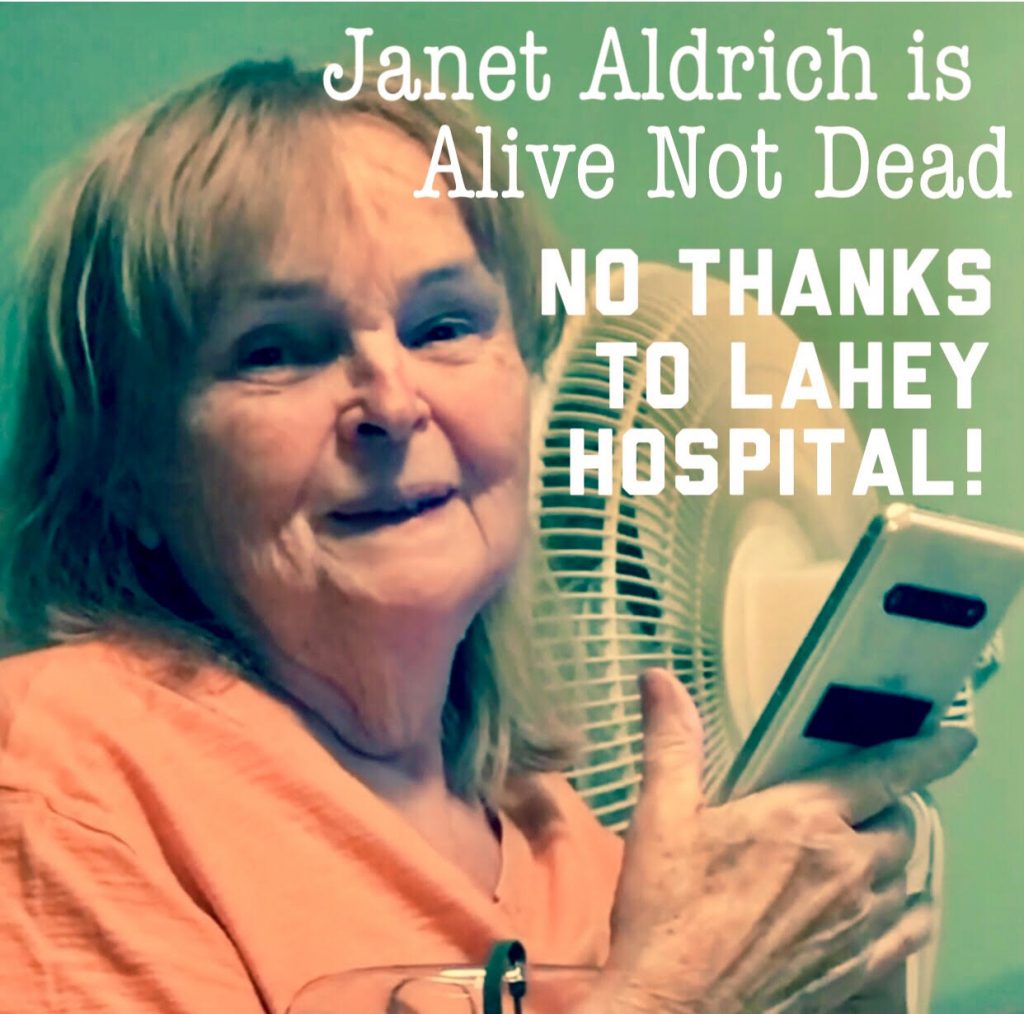 Burlington, MA – Janet Aldrich, who has been reporting at the State House for two decades, experienced difficulty breathing 3 weeks ago. She was taken by ambulance to Lahey Hospital where the 78-year-old was diagnosed with “COVID” double pneumonia. Her family was informed that she would die within 24 hours unless she agreed to take Remdesivir and be put on a ventilator. She said no.

Instead, Aldrich requested that Lahey treat her with protocol in alignment with the America’s Frontline Doctors (AFLDs.com). Lahey refused. Following a stand-off, including an emergency injunction hearing, and 9 days of what Aldrich calls “torture” she was essentially sent home to die.

“They told my son, Mark, I would not survive the ambulance ride home,” said Aldrich. But Janet defied the hospital and the odds. After only two weeks convalescing  at her son’s home receiving the treatments she couldn’t get at Lahey, Janet is making a remarkable recovery.

“I was medically kidnapped and held hostage in a hostile environment where first, they forced me against my wishes to be tested for COVID. Then I was told by a staff doctor that the result was negative, but it was put on my record as positive,” explained Aldrich. “This enabled the hospital to lock me down, isolate me from my family, and constantly pressure me to submit to hospital protocol that I did not want.”

At the time of admission, Aldrich made it clear that, under no circumstances was she to be put on a ventilator.  Without her consent, she was listed on her record as DNR (Do Not Resuscitate). “And once Lahey learned that I had chosen not to get the shot, they pretty much put me aside and left me to die,” explained Aldrich. “They did not even give me an IV for the first 3 days until I quickly became dehydrated and demanded one.”

As she battled double pneumonia, the founder of Commonwealth Freelance Media shifted into whistleblower mode to survive. Aldrich sent out videos and messages through her COMFLM network, sounding the alarm on the medical tyranny and discriminatory treatment she was forced to endure. She urged friends, family and colleagues to go public with the story and the SOS “get me out of here!”

Family members called into Jeff Kuhner’s morning radio show on 68 WRKO to share Janet’s plight. Lahey was flooded with so many calls that operators and staff denied she was there, or callers were simply disconnected at the mention of her name. Protestors gathered for days. Those at the front entrance were approached by the Burlington Police who threatened trespassing charges, as directed by Lahey’s Chief Operating Officer, Stathis Antoniades, who personally came out to inform protestors that they, and their #SaveJanet signs, could not be there.

A close friend of Janet’s, whom she appointed as her health care proxy, stopped to talk with protestors during one of his visits and from that point forward, he was banned from the hospital. Lahey even went so far as to block him from delivering time sensitive health documents to Janet that required her signature. The hospital held the proxy in the lobby with a guard and kept him waiting for 30 minutes before the signed papers were returned by another security guard.

Ironically, not only has Aldrich been a Lahey patient for years, but she once worked at the Lahey as well. Prior to her stay she thought very highly of the hospital. Not anymore.

“It was horrible. I feel like I was assaulted by Lahey Hospital,” exclaimed Aldrich. “It was torture. I felt like I had been waterboarded. I felt so unsafe, I finally called the cops a couple of nights before they released me,” reports Aldrich. “What happened to me is indicative of a much bigger problem though. They are isolating people and taking control of their very lives. Patients are being neglected, abused and violated. Then they just become numbers or statistics.”

While Aldrich stood firm in her choices, refusing theirs, family, friends, medical professionals and legal advisors were frantically working around the clock to get her home. Through the kindness of strangers, friends and courageous volunteers Team #SaveJanet was formed.

Among the many who came forward to help Janet was freedom fighting defense attorney, Bill Gens who explored legal options with the family. They learned how to take the appeal for her treatment all the way to Middlesex Superior Court, where they filed for an emergency injunction.

During the virtual hearing, Janet’s son, Mark Aldrich, faced off with Lahey officials and lawyers. The moment his mother was asked to speak on the zoom, that was watched live by several dozen people, a staff member burst into her room and disrupted her, rustling around, running equipment, and flushing the toilet more than once. When Janet said, “Excuse me, please come back later. I am in a court hearing being recorded,” he rudely responded, “I don’t care what you’re on! Don’t record me!” Barely missing a beat, Janet said to the Judge, “See the kind of treatment I am getting here? So disrespectful!” Still, Lahey refused to honor her treatment wishes and the Judge declined to issue an order compelling the hospital to depart from their medical “protocols” and provide her with hers.

At this point the focus became to get Janet out immediately. The biggest obstacle was her oxygen needs. Following days of research and contact with home health providers, a good Samaritan, retired hospice nurse recommended a South Coast oxygen company, who had a respiratory therapist who was up to the task of configuring high flow oxygen.

They worked in conjunction with John Diggs, MD, a direct primary care provider whom Janet had met through her network. He stepped in not only to coordinate the many facets of her home care, and assist her in receiving treatment that aligned with the AFLDS protocol, but the Internist was also instrumental in negotiating with a board of Lahey doctors and administrators for Janet’s release.

After a week of complaint calls, protests, meetings with doctors, and with her at-home needs satisfied Lahey finally agreed Janet could go home through hospice, but not without their warning that she may NOT survive the 35-minute ambulance ride. She was sent home to die. But she didn’t.

Healthcare workers who knew Janet came forward to volunteer to assist her at home, including AFLDS’s Jess Abu, a Combat Medic/EMT who helped Janet around the clock, and Erin McDermott, RN, who after 20 years as a nurse just opened her own fitness center. They coordinated care with other friends who offered to bring food and supplies and help Janet get what she needed to recover.

An important piece of Janet’s healing process is good nutrition and supplements and yet another friend referred Janet to an alternative healthcare clinic whose focus is on fortifying well-being rather than on the ailment itself. Through nutrient dense foods and an extensive supplement regimen, in conjunction with the other protocols, Janet is experiencing rapid healing. Her oxygen needs have dropped dramatically, from high flow (which keeps the patient tethered to machines at home), to reduced liter flow that will allow her to become mobile with portable oxygen as she continues to improve.

Janet is already able to go for long periods of time without oxygen as she moves about the house, reads her original poetry out loud, catches up with visitors, or responds to her many friends and supporters. She was fortunate to receive high potency vitamin C, other vitamins and supplements along with treatments that America’s Frontline Doctors are working so hard to get to those in need. Her friends, family and healthcare workers are marveling at her miraculous recovery as she prepares to return to her own apartment this weekend.

Lahey refused Aldrich the treatment that is now saving her life. “We must to get people the treatments that will make them well, not make them die,” says Aldrich, who now has even more resolve to continue as an unwavering advocate for freedom, especially where medical choice is concerned.

Join Janet’s Journey, get updates and help her continue her remarkable recovery with a contribution toward her healthcare expenses!

Online or by mail at: https://givesendgo.com/savejanet?utm_source=sharelink&utm_medium=copy_link&utm_campaign=savejanet

Protestors in the rain at Lahey Hospital where Janet was

Janet Aldrich days after her release from Lahey Hospital. and receiving her life-saving treatments of choice.

Spread the love
Spread the love
Previous StoryNEWS FEED: Whistleblower: Border Agents To Be Fired If Not Fully Vaxxed
Next StoryFIVE FREEDOMS: Over 3,000 Doctors and Scientists Sign Declaration Accusing COVID Policy-Makers of ‘Crimes Against Humanity’