Back to School: A Tipping Point in US Politics 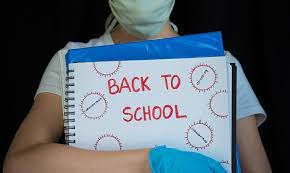 The debate over opening America’s schools may be the tipping point at which the unending politicization of the Covid-19 pandemic will finally end. Every night, at dinner tables around the country, parents are discussing the one topic that unifies our country—what is best for children. The answer will not be driven by partisan debates or political orientation, but by every parent’s desire to do right by the children in their care.

Over the past few weeks, we have heard one politician after another make false claims about the health of American children. Some suggest that kids don’t catch Covid easily, others say they may become infected, but they won’t get ill if they do. Both assumptions are dangerously wrong.

New research out of Italy shows that children, when infected, have as much—if not more—of the virus in their noses and throats as infected adults. Not only can children easily spread the disease to others, but they may be more infectious than any other group. After looking at nearly 1,500 confirmed Covid cases, researchers found the highest rate of contagiousness was among those 5 to 10 years old.

It is thankfully true that the majority of children, once infected, show no symptoms or only mild ones. But that they rarely fall severely ill does not mean that it never happens. Just this week, a seven year old boy in Georgia, with no known chronic conditions, died from the disease. In others, infection triggers a multisystem inflammatory syndrome (MIS-C) that can lead to loss of speech, loss of coordination, and long term brain damage.

The denial of the true and present danger Covid poses for students and their families is the latest in a series of politically motivated missteps that have only led us further and further along the brink of disaster. The failure of the current U.S. administration to recognize the scope of the pandemic and its impact on American families left us woefully underprepared for the level of testing needed to contain the outbreak in its earliest stages. In April, when infections were surging in hotspots across the country, the actions of our leaders flew in the face of our nation’s best public health experts, as Americans were encouraged to plan for an Easter reopening complete with packed churches. Today, as the administration pushes for a full reopening of our nation’s schools, no matter the surge of infections in communities at large, they offer a new opening for this silent invader.

If it weren’t for such erroneous blunders in governance and leadership, the virus would not be in such good stead as it is today. In the United States, a country of roughly 325 million, we had nearly 55,000 new infections and more than 1,300 deaths today. In China, a country more than five times our size, they had 37 cases and no reported deaths.

Americans know that they are being led down a dangerous path. And parents know that politics is now putting their children at risk. Polls show that most parents, however burned out and overworked from their experiments with remote learning, disapprove of the U.S. administration’s handling of the issue and push to fully reopen schools.

The decisions being made by this administration are not a remote abstraction. They are proximal and deeply personal. Do I trust this government enough to protect my children? Do I believe my President when he says my children are safe? Every parent and grandparent I know is desperate for someone to tell them what to do, but the voices they hear are not ones they are prepared to trust. With the start of a new school year fast approaching, we must finally ask ourselves how much we are willing to sacrifice. When it comes to the safety and schooling of our children, parents hold great power. The time has come to wield it and to hold this administration to account in the polls.

William Haseltine is a former Harvard Medical School professor and founder of the university’s cancer and HIV/AIDS research departments. He also serves as chair and president of the think tank, ACCESS Health International. His most recent book, A Covid Back To School Guide, provides insight into the question all parents and students are asking today—is it really safe to go back to school?