The Maverick Takes Time Out – And Health Care Will Wait 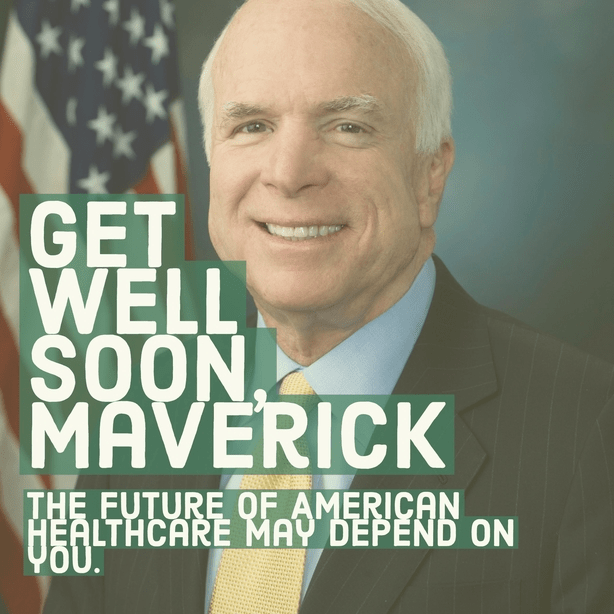 Last Friday, Senator John McCain (R-AZ) underwent serious surgery — to remove a two-inch blood clot from above his left eye. Sen. McCain’s recovery from the surgery will delay his return to Washington, and this delay may ultimately stall the vote on the Obamacare-replacing Health Care bill. Senate Majority Leader, Mitch McConnell (R-KY), tweeted on Saturday that the Senate will delay the vote, at least, while McCain recovers.

Initially, Senator McCain’s office had released a statement to the effect that he would not be resuming work for a week, due to the “minimally invasive craniotomy with an eyebrow incision” at the Mayo Clinic Hospital in Phoenix, “following a routine annual physical.” But subsequent reports, from various medical experts, have asserted that the recovery time for such a procedure may be much longer.

The cause of the blood-clot has not been disclosed by Sen. McCain’s office, and doctors at the Mayo Clinic are not taking interviews from the press. Dr. David J. Langer, chairman of neurosurgery at Lenox Hill Hospital in Manhattan, told The New York Times that the diagnosis was most likely a ‘subdural hematoma.’ This is a collection of blood between the dura, the outermost membrane that covers the brain and spinal cord, and the brain.“You would hope it’s a subdural, a relatively benign process,” Dr. Langer explained. “It’s common in the elderly, especially if they’re on blood thinners. It can occur from relatively minor head injuries. The elderly brain loses volume, and as it retracts, the bridging veins from the brain to the dura are under increasing tension, and minor trauma can cause them to ooze or leak.”

With the Senator aged 80, there is concern among some about any potential complications. But Dr. Philip E. Stieg, the chairman of neurological surgery at Weill Cornell Medicine, and the neurosurgeon-in-chief at NewYork-Presbyterian, also told The New York Times that it was a good sign “that Mr. McCain was able to go home so quickly.”

The Daily Clout team wishes the Maverick a speedy recovery. He will definitely be missed on the Hill this week. And the nation will wait a bit longer to find out what its Health Care policy will turn out to be.

Spread the love
Spread the love
Previous StoryThis Week’s Window On Congress
Next StoryAn Undebated Bill to Pass This Week: Handing Over Billions in FAA Funds, And Most FAA Responsibilities, to a New Corporation with Contracts with the Private Sector