The Catastrophe That Could Have Been Avoided: Examining China’s Response to the Covid-19 Outbreak (September 2019-January 2020) 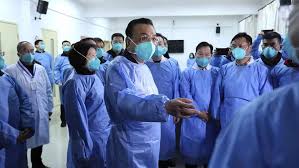 Reprinted with permission from Citizen Press.

In 2020, an outbreak occurred in the city of Wuhan in China’s central province of Hubei. This outbreak evolved into a worldwide epidemic that has severely impacted people’s health, their way of life, the global economy, and the political landscape. The name of the epidemic is the “novel coronavirus pneumonia” epidemic. Because the first outbreak occurred in Wuhan, Chinese officials initially referred to the disease as “Wuhan pneumonia” (Wǔhàn fèiyán) or “Wuhan pneumonia of unknown cause” (Wǔhàn bùmíng yuányīn fèiyán), and it became commonly known as the “Wuhan coronavirus.” On January 7, 2020, the World Health Organization named the ailment “coronavirus disease 2019” (COVID-19)[1] since the first cluster of infections was discovered in December 2019. It is a global pandemic caused by severe acute respiratory syndrome coronavirus 2 (SARS-Cov-2).

As the COVID-19 epidemic, which has already claimed hundreds of thousands of lives, continues to wreak havoc around the world, mankind must ask itself: Could this global catastrophe have been avoided?

In March 2019, at the “Two Sessions” of the National People’s Congress (NPC) and the Chinese People’s Political Consultative Conference (CPPCC), Gao Fu, director of the Chinese Center for Disease Control and Prevention (CCDC) and a member of the CPPCC National Committee, told the media with utter confidence: “People often ask me whether SARS will return now that more than a decade has passed. This type of virus, i.e., SARS, may appear at any time, but I can say confidently that a SARS-like situation will never recur. Our country’s infectious disease monitoring system is well-built, so this type of incident will not happen again.”[2]

Gao Fu was only half right. Indeed, SARS-like viruses can emerge at any time, but China’s infectious disease monitoring system was unable to prevent the COVID-19 calamity.

In November 2016, at the third World Internet Conference in Wuzhen, Li Bin, director of the National Health and Family Planning Commission, delivered remarks at the Internet & Smart Healthcare Forum. In his remarks, Li claimed that China had built the world’s largest direct network and reporting system for infectious diseases and public health emergencies, and that the time required for epidemic-related information to be reported from the grassroots level to the CCDC had been shortened from 5 days to 4 hours.[3]

Following the SARS outbreak in 2003, the Chinese government learned from its mistakes and spent vast sums of money to establish a nationwide information monitoring and reporting system for infectious diseases and public health emergencies (abbreviated “direct reporting system”), which was officially launched nationwide on April 1, 2004. “Pneumonia of unknown cause” was designated as a high priority for monitoring and reporting. In addition, in 2006, the Chinese government enacted the National Public Health Emergency Contingency Response Plan.

It should be noted that the aforementioned direct reporting system and emergency response mechanisms for public health emergencies have been quite effective. In recent years, China has experienced an outbreak of avian influenza and multiple outbreaks of the plague. It was precisely with the help of China’s direct reporting system and emergency response mechanisms that these outbreaks were discovered and handled in a timely manner, halting their further spread.[4]

China has a world-class disease control system, as well as medical personnel and public health experts who gained extensive practical experience from combating the 2002–2004 SARS (i.e., SARS-CoV-1) outbreak. Additionally, as a result of the SARS outbreak, Chinese government officials and ordinary citizens alike are particularly sensitive to such epidemics and know how to react to them. Consequently, China should have been well-equipped to prevent the recurrence of a SARS-like epidemic. Yet it still occurred, and has been far more severe and tragic than the last time.

We must ask: Why did this disaster happen despite being preventable? Who is responsible for the occurrence of this avoidable disaster?

The Chinese government has devised its own set of narratives and statements regarding its performance in dealing with the COVID-19 epidemic, frequently using adjectives like “wise,” “timely,” “transparent” and “responsible.” The Chinese government fully mobilized its state apparatus to impose its rhetoric on the world and fabricate the historical record to meet its own needs. Its efforts include the voluminous A Great Nation’s Battle Against the Epidemic[5], published in multiple languages in February 2020; “Chronicle of international cooperation regarding China’s release of information on the novel coronavirus pneumonia epidemic and its promotion of epidemic prevention and control”[6], published by Xinhua News Agency on April 8, 2020; “America’s China-related lies about the new coronary pneumonia epidemic and the truth of the matter”[7], published by Xinhua News Agency on May 9, 2020; and the whitepaper “China’s Action to Combat COVID-19”[8], published by the State Council Information Office on June 7, 2020.

The problem is that if the Chinese government was really as wise, timely, transparent and responsible as it has portrayed itself in its well-crafted narrative, and if China really has a world-leading disease control system, then COVID-19 would have been discovered in its nascent stages and nipped in the bud, and the ensuing pandemic would never have occurred. It is clear that something is amiss with the Chinese government’s narrative. However, the Chinese government has strictly controlled information and suppressed speech related to the epidemic, and has sought to eliminate any opportunity for alternative narratives to emerge.

On June 9, 2020, Chinese Foreign Ministry spokeswoman Hua Chunying posted a comment on Twitter, stating: “China issued the whitepaper ‘China’s Action to Combat COVID-19’ not to defend itself, but to keep a record, because the anti-epidemic narrative cannot be tainted by misleading lies; it is for the correct collective memory of all mankind.” 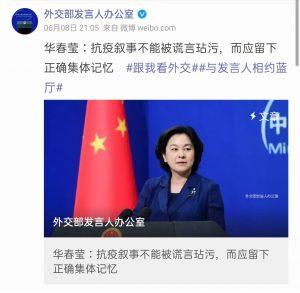 We believe that the truth about efforts to combat the epidemic cannot be concealed by the Chinese government’s lies. The collective memory of mankind cannot be “corrected”; rather, it should be the sum total of individual narratives. With this ideal in mind, Citizen Power Initiatives for China formed a team to conduct research and restore the truth. After two months of hard work, we have completed this research report. The report focuses on tracing the facts about the first two months of the outbreak, especially the critical monthlong-period from late-December 2019 to late-January 2020. We use detailed information and evidence – mostly gathered from mainland China – to restore the truth about the conduct and deeds of the following departments and entities at every important stage of the epidemic: China’s biomedical institutions (hospitals, biological research institutes, etc.), China’s public health regulatory authorities (disease prevention and control agencies, public health administrative departments, etc.), China’s public security and stability-maintenance authorities (central and local), China’s propaganda authorities (central and local), China’s foreign liaison authorities (including the International Liaison Department, the National Health Commission’s external liaison office, and Customs), as well as the comprehensive decision-making bodies of the Chinese government (the CCP Central Committee, the State Council, provincial Party committees, provincial governments, municipal Party committees, and municipal governments). We then put the various pieces of the puzzle together, carry out comprehensive analysis and argumentation, draw conclusions, and raise some residual questions. Based on our rigorous analysis and argumentation, we introduce six overall conclusions in the final chapter, Chapter 15. The conclusions are as follows:

[1] In this report, the terms “Wuhan pneumonia”, “Wuhan virus pneumonia”, “novel coronavirus disease” and “COVID-19” refer to the same thing and are interchangeable.

[4] The Economic Observer, “Why did the national direct reporting system for infectious diseases—created by the national government after SARS—fail to launch in a timely manner?” www.eeo.com.cn/2020/0203/375484.shtml

Dr. Jianli Yang is founder and president of Citizen Power Initiatives for China. The recipient of multiple international human rights, democracy and academic awards, Dr. Yang is an internationally recognized major leader and architect  of democracy for China.
Spread the love
Spread the love
Previous StoryCongressional Candidates and Voters Sue to Stop Trump’s Sabotage of USPS
Next StoryContaining Covid—American Style