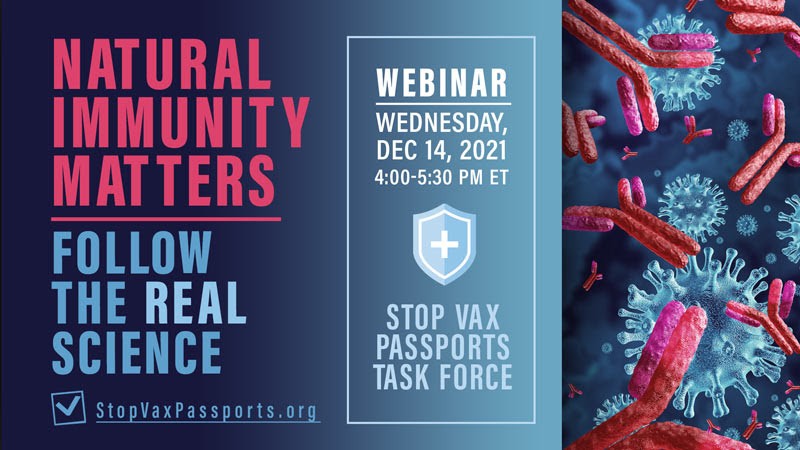 (After pressing play, please wait while the video loads.)

On Tuesday, Dec. 14, Stop Vax Passports task force held an important discussion regarding the impact of natural immunity denial by government agencies and their bureaucracies as we looked at what may be the catalyst behind the drive to vaccinate every man, woman, and child walking the earth—profit, power, and control—as they endeavor to introduce digitized tracking technologies and health-based social credit systems exported, like the virus, by Communist China.  We peered into the Covid Tyranny of Melbourne, Australia.  We heard from those bravely resisting this tyranny through legal battles and taking action at the state level.

This Stop Vax Passports task force webinar was moderated by Frank Gaffney, vice-chair for the Committee on the Present Danger: China, and hosted by Reggie Littlejohn, Founder and President of Women’s Rights Without Frontiers.

The U.S. Government and the Centers for Disease Control have consistently refused to recognize the validity—indeed, the inconvenient truth— of natural immunity gained by those who have recovered from a Covid-19 infection. Instead, they insist on a seemingly endless round of vaccines and boosters as the only way forward towards herd immunity and an end to the pandemic.

Meanwhile, the real science shows that current available vaccines do not stop infection or transmission. Rather, natural immunity is stronger and more durable than vaccination.  These facts have been jettisoned to justify political and profit-driven directives aimed at increasing vaccination rates—and related expansion of public health emergency powers—at all costs.

Those who have previously recovered from Covid-19, are being shamed, marginalized, and punished by policy makers and public health agents.  Some are losing their job, are unable to attend school, and even being denied organ transplants.  Health officials wrongly promote any spike in Covid cases as a “pandemic of the unvaccinated.” These politicians and unelected bureaucrats willfully deny the growing body of scientific studies showing natural immunity is indeed stronger and more robust in protecting against severe disease and hospitalization than are the vaccines currently available.

When the numbers of vaccinated are added to those with natural immunity, will the population of the United States have reached “herd immunity?”  If so, would the basis of “Emergency Powers” — wielded to take away our rights – be removed?  Could Natural Immunity Denial be a necessary precondition to justify vaccine mandates and digital passports?  Is coercion via vaccine mandate preparing us for coercion in other areas of our lives?  Is discrimination against the unvaccinated part of an “Othering” campaign that will lead to internment camps for the unvaccinated in the U.S., similar to what is happening in areas of Australia?  Are we drifting into bio-tech medical tyranny?