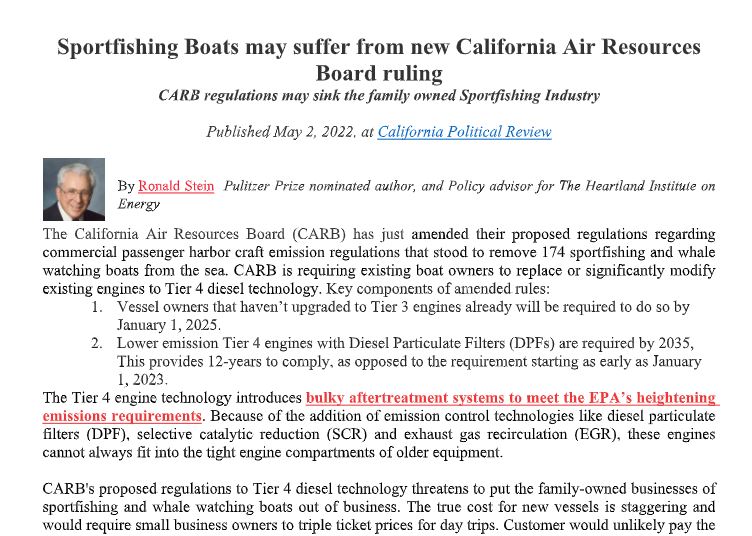 CARB’s proposed regulations to Tier 4 diesel technology threatens to put the family-owned businesses of sportfishing and whale watching boats out of business. The true cost for new vessels is staggering and would require small business owners to triple ticket prices for day trips. Customer would unlikely pay the huge increases to fish or observe marine life and it would end various non-profit programs for at-risk youth and veterans.

CARB’s regulations will require major reconstruction of the boat’s hull to account for added size and mass of modified engines and exhaust systems or the vessel must be removed from service. Also, CARB’s regulations will require the number of passengers to be reduced to offset the added weight and displacement of new and larger engines and emission control systems, resulting in significantly higher ticket prices

A survey of sportfishing boat owners concluded that if the regulations are adopted California’s sportfishing fleet would be non-existent within the next 3-6 years, denying millions of California families and tourists’ access to recreational fishing, whale watching, diving, and ocean educational activities. The analysis also reveals unintended consequences for the state’s economy, fishery and conservation programs and significant declines in fishing participation rates. Hardest hit would be low-income communities.

CARB’s drafted regulations for Tier 4 diesel engines to clean up emissions in California’s backyard appears like Newsom’s efforts to continuously decrease in-state crude oil production and rely on foreign suppliers to meet the oil demands of the state.  Newsom’s strategy has the state dependent on the maritime sector for importing foreign oil that adds, every year, more than twice the annual GHG emissions than the entire Californian transportation sector!

CARB has failed to understand that the most important fact about today’s environmental movement, and what the 2022 Pulitzer Prize nominated book “Clean Energy Exploitations – Helping Citizens Understand the Environmental and Humanity Abuses That Support Clean Energy,  explores is that the healthy and wealthy countries of the United States of America, Germany, the UK, and Australia representing 6 percent of the world’s population (505 million vs 7.8 billion) could literally shut down, and cease to exist, and the opposite of what you have been told and believe will take place.

Simply put, in these healthy and wealthy countries, every person, animal, or anything that causes emissions to harmfully rise could vanish off the face of the earth; or even die off, and global emissions will still explode in the coming years and decades ahead over the population and economic growth of China, India, Indonesia, Japan, Vietnam, and Africa.

CARB feels good that they may be saving the health of a few, at the expense of other Californians, while still maintaining their “blinders” toward millions of other fatalities internationally, as California continues to “leak” emissions and air quality responsibilities to developing countries halfway around the world. The same countries that have virtually non-existent environmental regulations nor labor controls to protect the local workers in those developing countries. CARB has shown no concern about the 11 million child fatalities internationally nor all the coal fired plants being built. Eradication of America would still see emissions exploding in developing countries. I hope the members of the CARB can sleep peacefully!

Boats that do not meet CARB’s standards would have little to no resale value in California, making the financing of a new boat impossible for many. Without feasible financing, many vessel operators will shut down.

Higher passenger ticket prices would impact fishing participation rates, and as fishing license sales and revenue decline so would the funding for state fisheries and conservation programs. CARB seems intent on promoting shortages and inflation onto communities of lower economic means that stand to be most impacted by higher passenger ticket prices.

Nowhere in the country has a state proposed regulations that will have the practical effect of destroying offshore fishing and whale watching businesses and threatening the coastal communities that depend on them for tourism and visitor spending. This uniquely California experience will come to an end if CARB’s plans are not rejected.

Pulitzer Prize nominated author, and Policy advisor for The Heartland Institute on Energy.

Spread the love
Spread the love
Previous StoryPfizer Documents Part One: The Wolf Team’s Findings So Far
Next StoryEconomy and Inflation Hands Down Top Issue for 2022 Voters