Speaking Up: The Struggle to Remain True Here’s a poem I wrote in October of 2019, before the world became unrecognizable:

She Opened Her Mouth and the Roof Fell In

She opened her mouth and the roof fell in.

The walls collapsed around her
and the house she had built
with the sweat of her heart
crumbled to dust.

If only I’d kept my mouth closed,
she thought.

and she could hear birdsong
for the first time in years

So she swept some fragments to the side,
sat down in the midst of the rubble,
lifted her face to the heavens

And called it home

At the time I wrote that, I was afraid that by sharing my honest feelings about and within certain relationships, I would lose those relationships. A fairly common fear, I discovered by the comments I received, and not unwarranted. Telling someone that their actions have caused a rupture can often send that person packing. It’s far easier to leave than to stick around and work together to repair the damage.

I re-read the poem recently, and realized that it is speaking to me (how ironic!) in a different way now. What inspired my poem in 2019 — an emotional reaction to relational consequence — has mushroomed into a more nuanced, strategic response to an increasingly intolerant world.

Over the years, I’ve held beliefs that run contrary to the mainstream: I believed that television wasn’t a healthy influence on children and thus didn’t have a television in our home for almost 15 years; I believed that our kids didn’t need cell phones until they were in high school; and I believed that the pharmaceutical industry was doing a whole lot of harm. I had no problem — and still don’t — sharing those beliefs with anyone who cared to know.

In college, too, I was completely outspoken. I argued with anyone and everyone. The environment in college at that time fostered that kind of freedom; professors encouraged debate and the honest expression of ideas. We were there to learn from each other, particularly those with whom we disagreed.

It’s a different world now. Society at large doesn’t want to hear dissenting views, and I don’t feel nearly the confidence I used to. It makes sense. Speaking one’s mind now can have some pretty dire consequences beyond losing a relationship (which is painful in and of itself). Expressing yourself now can place you amidst the rubble of your social standing, your platform, your license, your job, your financial security.

I recently re-connected with a dear friend from high school who was accompanying her husband on a business trip to my neck of the woods. She and I, along with our spouses, agreed to meet at a restaurant.

As my husband and I drove, he asked me how I felt about seeing her again after almost a decade. (I’ll call her Sofia.) “I’m excited,” I said, “and I’m kind of dreading it, too. What if we are on totally opposite sides of the fence? How will I answer certain questions? Ughh!”

At the restaurant, we hugged our friends and chatted energetically for a good hour about our children, catching up over burgers and tacos. I sidestepped a few pointed questions, and changed the subject once or twice to preserve neutrality.

And then, Sofia made a comment — one that I could deflect if I chose. Immediately, a rush subsumed me — a heat of panicked urgency, a holy-shit-now-what hit of adrenaline. The truth of my conviction was colliding with my fear of rejection. Which one would prevail?

I looked at Pete, whose eyes said “it’s up to you, she’s opening the door if you want to walk through it, but no pressure” (he has very expressive eyes). I nodded, turned to Sofia and said, “Actually, yeah, we decided not to go that route. At all.”

I held my breath, and waited for the roof to fall.

It didn’t. The four of us talked for hours after that, feeling more and more like birds of a feather.

Dr. Naomi Wolf recently published a fiery exhortation to speak up. In it she says,

“I am exasperated by those who stay in the shadows, agreeing with the risktaking of others, who talk about their ‘courage.’”

She’s right to be exasperated. She saw the handwriting on the wall long before many others did, and has been at the forefront of public dissent for the last year and a half: a lonely place for sure.

Wolf also directs her ire mainly at a certain class of individuals: “people whom I know socially or professionally — people from journalism, from politics, from medicine, from science (most of them upper-middle-class ‘men in suits),’” those who privately agree with her but have positions of prominence they are not willing to jeopardize.

There are reasons for their silence, of course. There are always reasons. I’m not here to say that any or none of those reasons are valid. I would, however, point out that those who rise to prominence are often those who are extremely good at complying.

Jeff Schmidt, in his book Disciplined Minds, describes the process by which higher education shapes, fosters, and rewards conformity, thus creating a professional class that is willing to leave its independence at the front door of a corner office. It’s a fascinating book, one that I plan to explore in another essay.

But back to Wolf, who says:

“The problem is that we are now in a time when it really matters if a lot of people resist all at once. This decision whether or not to speak up makes the difference, when it scales, between freedom or servitude forever.

Tyrannies only fall when there is mass resistance.” [emphasis hers]

She is right, and resistance comes in many forms. The Polish munitions factory worker during WWII who secretly sabotaged artillery to be used by the Germans; the artist who paints truth concealed in metaphor; the paper-pusher who leaks an incriminating document; the healer who asks just the right questions at the right time to open a patient’s eyes. Who is to say that any of these forms of resistance is better or more heroic than another? Like actors in a stage drama, we all have our important roles to play — and not all of us will be a lead.

I think the key is paying close attention to our inner world, to the promptings of our higher selves that tell us what we are called to do at this time, or any time, for that matter. But particularly now.

What if your heart is telling you that the right thing for you to do is to speak up? How does that happen? I’m reminded of a quote from Norman Schwarzkopf. I know, I know… I’m not normally in the habit of quoting Schwarzkopf, (who is?) but this one just works:

“The truth of the matter is that you always know the right thing to do. The hard part is doing it.”

I’ve been more and more outspoken in this publication about what I believe is happening in the world. But the experience of talking with our friends that night at the restaurant helped me realize that gaining the courage to speak up in various circumstances can be a process.

I have a friend whom I consider to be very brave: she has no problem telling people face-to-face what she thinks. She scoffs when I say that she’s courageous, and tells me I’m brave for writing what I think — which makes me laugh.

Fear is fear, no? The fear I had in 2019 is probably not qualitatively different than the fear I feel now. It’s a matter of scale. Losing one significant relationship feels painful; losing your entire social standing and freedom can feel existential.

We are all figuring it out as we go, and not everyone has teflon skin to begin with. Like we say in theatre improvisation: just start where you are.

A few days ago, I sat on the blustery beach amongst a small crowd, there to watch the sunset. As the sun neared the horizon, my view was obstructed by a constant stream of selfie-snapping people, so I stood up and moved.

The sun sank from one-half to one-third. The wind whipped across the beach, its gusty gales buffeting my ears and thereby blanketing me from the world. Alone, standing with my bare feet in the sand, I was moved to quietly sing “Day is Done” (set to the tune of “Taps”) to myself. The words are:

Day is done
gone the sun
from the lakes, from the hills, from the sky…
All is well
safely rest
God is nigh…

As a die-hard summer camper in Ohio and counselor in Maine, I used to join my voice with the whole camp every evening at flag-lowering, stretching out the “nighhhh…” as long as breath would allow. I did the same here, holding the note until the last sparkle of gold vanished from the ocean.

The reverie broken, people began leaving for their cars almost instantaneously, though I did hear a smattering of applause and a “Yay, sun!” I turned to go, and saw a woman getting up from a rock a few yards away, near where I had originally perched.

“Gorgeous sunset,” she said as I approached, and I nodded.

I couldn’t help myself: “I wanted to say ‘Down in front!’ to the selfie-takers,” I joked.

She nodded, then her face went soft. I wondered if I had offended her.

“Your singing was beautiful,” she said, rupturing my false impression of isolation, “It made me cry. Thank you.”

I would like to say that we mustn’t be afraid of singing our songs, whether the hall is empty or it’s a sold-out crowd, because this is what human beings do. We think, we feel, and we speak. And like birds of a feather calling into an empty sky, this is also how we find each other.

I feel the truth of that as I write it, but I also know it’s not as simple as that. We all have our own parts to play, and no one can tell you when or how or even if it’s the right time to step forward and sing.

I’ll leave you with Mark Nepo’s thought, from The Book of Awakening:

“…the world is kept whole by those who can overcome their fear, however briefly.”

You may not possess the courage right now to sit down in the midst of the rubble, lift your face to the heavens, and call it home. But you may be ready to overcome your fear, however briefly. And that’s a start. 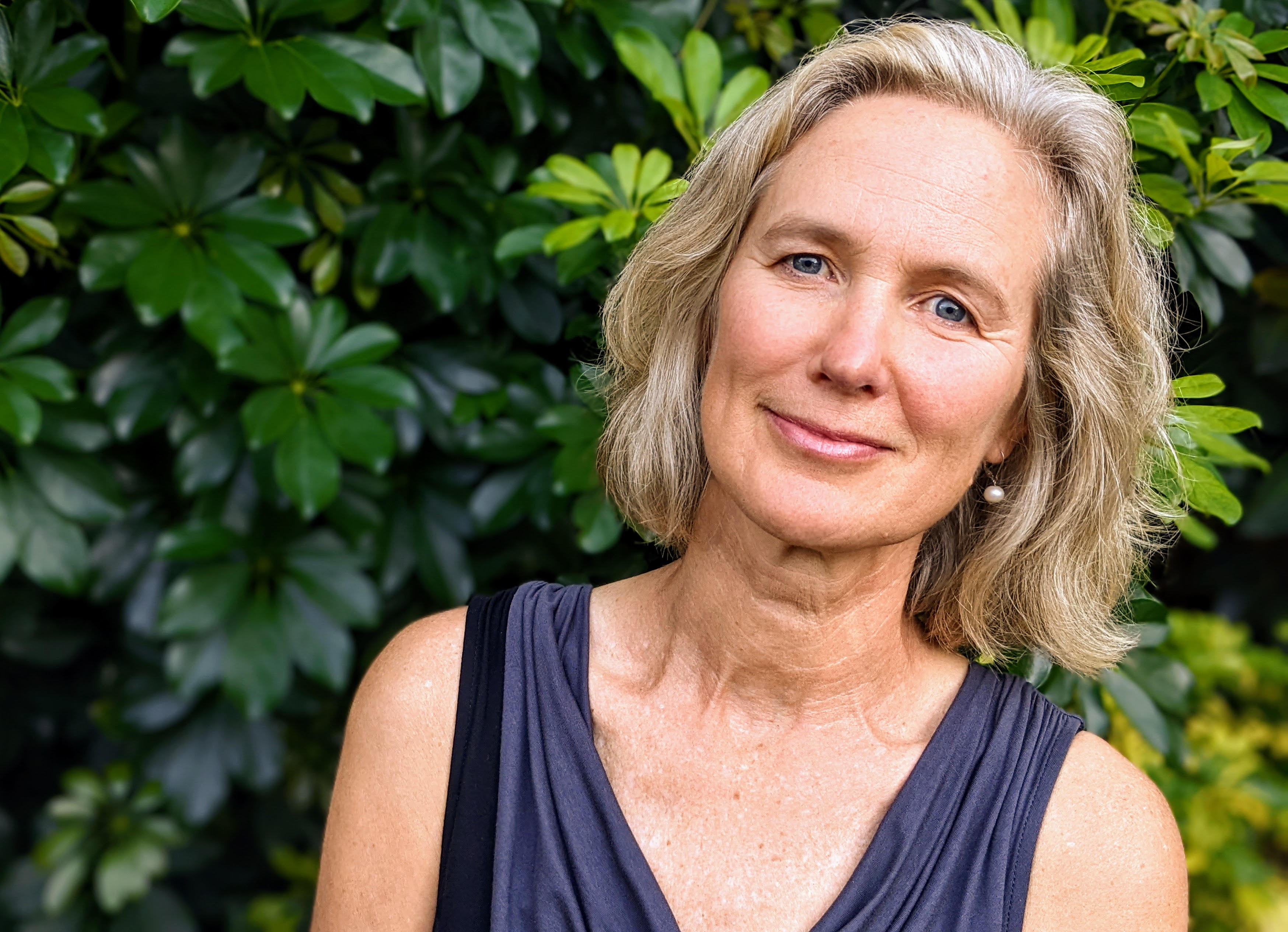 Mary Poindexter McLaughlin (BA Stanford University, MA SUNY Buffalo) is an award-winning playwright (The Buddha’s Wife), published poet, and essayist who believes in freedom and the transformative power of story. More of her writing in her publication, The Art of Freedom: https://marypoindextermclaughlin.substack.com.

Spread the love
Spread the love
Previous StoryNearly 70% Now Say They’re Less Likely to Do Business with Disney, and Will Support Family-Friendly Alternatives
Next StoryDr. Naomi Wolf Speaks at DEFEAT THE MANDATES Rally