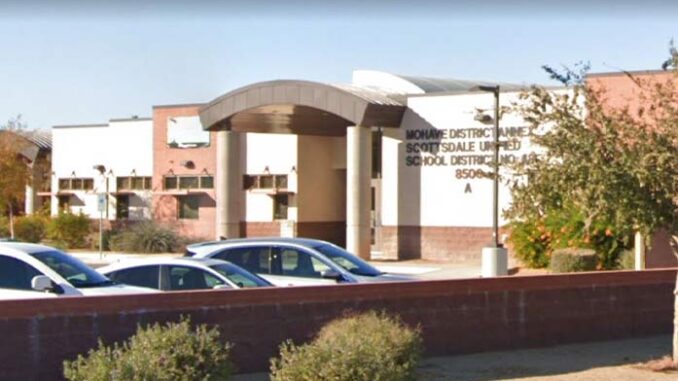 The Scottsdale Unified School District’s administration is scrambling to do damage control after a group of mothers discovered Governing Board President Jann-Michael Greenburg had access to a Google Drive full of personal information, documents, and photos of about 47 people, including children.

An email sent out Wednesday evening by the SUSD’s Communications Office sought to assure families that their personal and educational data is safe. However, the district also solely blamed the discovered digital dossier* site on Mark Greenburg, the father of Jann-Michael Greenburg.

The damage control appears to be too little too late for many parents in the Scottsdale Unified School District, including Amy Carney, a mother of six, who is among those calling for Greenburg to step down.

“I am calling for the immediate resignation of our board president Jann-Michael Greenburg. We cannot allow anyone in a leadership position to secretly compile personal documents and information on moms and dads who have dared speak out publicly or on social media about their grievances with the district,’ said Carney, who is running for a seat on the Scottsdale Governing Board in November 2022.

Even though Mark Greenburg is listed as the Google Drive owner, records from an Aug. 17 special SUSD board meeting show Jann-Michael admitted sharing a computer with Mark. With Mark and Jann-Michael sharing a computer and a home, there is no way to know which of them has been uploading files (now known as the “G Files”) to the drive, according to concerned parents.

In addition, some parents say that despite Jann-Michael’s denial of involvement with the dossier, they believe there appears to be evidence that Jann-Michael has complete knowledge of the Google Drive files and had shared some of its contents in an effort to intimidate SUSD parents. Parents are calling that an “unacceptable abuse of power.”

“We request President Greenburg’s resignation from the Governing Board effective immediately for this and other recent embarrassments to our district,” Carney said.

Attorney Alexander Kolodin of the Davillier Law Group expressed his concerns about the situation with the Scottsdale Unified School District.

“These allegations are deeply troubling, especially as concerns the photography of a minor child without parental consent and the taking down of license plate numbers of parents who Mr. Greenberg supposedly perceived as political opponents,” Kolodin said. “Mr. Greenberg is an elected member of the school board. If such a photograph was taken with his express or tacit consent, he would potentially be liable for violations of Arizona’s Parents’ Bill of Rights, which recognizes a parent’s ‘fundamental’ right to consent before the government makes a video or voice recording of the minor child.”

But Kolodin says there are more concerns beyond the mere existence of the Google Drive file, including reports that Jann-Michael Greenberg’s father engaged in some acts while keeping his face hidden under a helmet and while wearing motorcycle gear.

“Both Arizona and the federal government have laws prohibiting both intimidation generally and voter intimidation in particular such as ARS Titles 13 and 16, the Ku Klux Klan Act of 1871, the Civil Rights Act of 1957, and the Voting Rights Act of 1965,” Kolodin said. “If these allegations are true, Mr. Greenberg and his father might be liable for violating one or more of these laws – though it is difficult to say from the limited facts that have been reported and they must, of course, be presumed innocent unless and until proven guilty.”

*Because of the personal and sensitive information it contains, AZ Free News is not posting the dossier at this time.