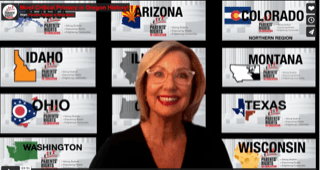 REPUBLICAN PRIMARY, MAY 2022
OREGON’s David and Goliath Political Battle
THIS is the most critical Republican primary in Oregon. It could literally lead to the removal of the political stronghold the National Education Association has had on Oregon politics for the last 36 years!
Marc Thielman, who recently resigned from his Superintendent role with Alsea School District, is not only savvy about K-12 education! He believes is individual civil rights, including Parents’ Rights. He is smart about a whole lot of issues, including a way out of the Public Employees Retirement System stranglehold, which if not addressed, will bankrupt Oregon. He is not afraid to challenge anyone!
Did you know? Oregon ABC News affiliate, KATU Channel 2 News is trying to silence the very will of the public they claim to serve! They attempted to block some official, and legitimate candidate voices from participating in their April 7th televised Gubernatorial Debate, by requiring a candidate have at least $750,000 raised by March 31st, illustrating elitist mainstream media wants to control public perception and election outcomes! they are censoring candidate voices, omitting some in favor of others backed by corporate and establishment money!
Thielman’s campaign boasts 1,500+ unique donors, more than most other candidates. In addition, he has been featured on local and national news due to his nationally-known advocacy for Oregon students and parents, more than any Oregon gubernatorial candidate. He is a voter favorite and never should have been excluded from the KATU debate.
Other media outlets are also playing limitation games, meddling with manipulation and election outcomes by omitting grassroots candidates in their coverage: Willamette Week: https://www.wweek.com/news/2022/03/16/one-of-these-republicans-could-actually-be-your-next-governor/
KGW: https://www.kgw.com/article/news/politics/elections/oregon-gop-party-chair-governors-race/283-7f83cd31-57a4-4b59-a176-7366a2784863
On March 21 KATU’s Producer, Evon Burnicle, officially announced, “KATU News has decided to cancel the Democratic and Republican Gubernatorial Debates on April 5 and 7. We will concentrate our efforts on a debate with the primary winners in the general election in the fall.” What seems like a victory for our side, is even worse than being singled out,…or is it?
This has become a David and Goliath scenario of massive proportion. Several grass roots media outlets have stepped up to host independent debates. It means… we, you, me, and Parents’ Rights In Education must double down to raise money so our candidates have a fair opportunity to voice their opinions.
Marc Thielman needs our help, right away! If you want to support Mr Thielman, use this link: https://secure.anedot.com/marcfororegon/donate
Suzanne Gallagher
Parents’ Rights In Education
Spread the love
Spread the love
Previous StoryNearly 80% Oppose Putin’s Russia Representing USA to Negotiate Nuclear Deal with Iran
Next StorySeeing the World with New Eyes