“ANALYSIS”: The Fight Between Big Tech and Congress Over Anti-Trust Legislation — What’s At Stake: Innovation, Competitive Markets And How Big Tech Does Business 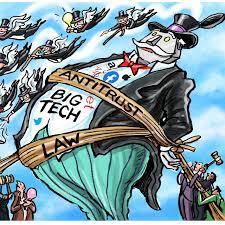 Last week the House Judiciary Committee passed the last bill, out of a package of six, aimed at curbing the market power of Apple, Amazon, Facebook, Google and other tech giants with a 29-12 vote. It faces stiff rebuttal from lobbyists and “Big Tech”. But, as evidenced by the vote, the one place where it does not face much opposition is in Congress itself. In fact, with the release in October 2020 of the House Judiciary Committee’s 450-plus page report on the 16-month Investigation of Competition In Digital Markets, the momentum for legislation has been accelerating. Putting the icing on the cake for stiffer regulation and enforcement of “Big Tech”, is the recent appointment of Lina Khan, a well-known critic of “Big Tech”, to Chair of the Federal Trade Commission (FTC), again on a bi-partisan vote of approval. Despite the strong push-back to the legislation from the companies directly, lobbyists and advocacy groups, broadly speaking, it’s doubtful that some or all of the bills will not pass given the established bi-partisan support. This is despite the stunning set-back this week with the dismissal of the FTC’s anti-trust lawsuit against Facebook. In fact, legislators point to this development as further evidence that anti-trust laws must be updated. A lawsuit by the Department of Justice (DOJ) and 40 states against Google is still outstanding. Tougher anti-trust enforcement appears certain in addition to interoperability between platforms, greater privacy and consumer choice, and finally, amendments to the antiquated Section 230 of the 1996 Communications Decency Act (CDA), all of which could substantially change how “Big Tech” does business. Here’s how we got here and what to expect…

It is no coincidence that the size and market power of many technology giants have grown through voracious acquisition strategies and predatory actions against smaller innovative competitors and suppliers, which in many cases, literally put suppliers and competitors out of business. Many technology companies were emerging from a nascent state in the 1970’s to mid-2010’s, right at the time when anti-trust enforcement was its weakest in decades. However, history while not necessarily repeating itself, may be coming upon a period of rhyming with respect to the anti-trust enforcement of the 1940’s to 1970’s. It was then that the prevailing thought was that there is nothing better than spirited competition to level any playing field and that vigorous competition among businesses was considered the prescription for maintaining a healthy democracy. Indeed the U.S. led the world by thwarting monopolies through legislative and judicial action such as the Sherman Act in 1890 and the Clayton Act in 1914. Both were rigorously enforced and amended in the ensuing years following their enactment. And, as highlighted in the new anti-trust legislation in the House and also in the Senate with S225 The Competition and Antitrust Law Enforcement Reform Act (CALERA), the burden of proof in the new legislation would be shifted to the business community whereas in the 1970’s up to now, the FTC and the DOJ were required to prove that a proposed acquisition “may substantially lessen competition” to satisfy their initial burden. In addition, expect a clamp-down on mergers that risk creating buyer monopsony power, or rather a market with a single buyer among many suppliers. Further, while shifting the burden of proof to companies proposing mergers is a biggie, also expect that the bar will be raised much higher for companies proposing mergers where market concentration would increase significantly. The bills, if passed and signed into law, will mark a return to the stronger enforcement policies of the 1940’s to 1970’s era.

No less than five new bills, introduced by the House as a package, address some aspect of anti-trust laws and enforcement. These are:

A sixth bill, H.R. 3849, the Augmenting Compatibility and Competition by Enabling Service Switching Act of 2021 (ACCESS), could, arguably, be included in this anti-trust package of bills because it focuses on ensuring interoperability between platforms by giving the FTC new authority and enforcement capabilities to establish rules that are pro-competition which includes interoperability and data portability online. However, it does cross over into data privacy and security as well, which is not the subject of this article.

All of the above bills that directly relate to anti-trust, heavily cite the Clayton and Federal Trade  Commission Acts and specific US Code brought about by these Acts in order to update and clarify anti-trust regulation and enforcement for the current generation of technology companies, in particular, “platform companies”. The bills also empower the FTC and the DOJ to determine which companies are “covered platforms companies” for purposes of enforcement. Along these lines, the bills do require that the FTC establish a “bureau of digital markets” within it. In all cases, the bills relate to companies that have at least 50 million monthly active US users and market capitalizations of more than $600 billion.

With these common understandings in mind, here’s how these bills break-down:

As the bills make their way through the legislative process, it should be expected that there will be some changes, amendments and possibly some merging of bills. And, while it is expected that some fur will fly within Congress, as witnessed by House GOP leader, Kevin McCarthy, criticizing the new bills by saying that they give too much power to enforcement agencies, his rebuke pales in comparison to the criticism leveled by lobbyists and advocacy groups. In this regard, please note that two of the biggest tech companies targeted by the proposed House bills, Apple and Amazon, are represented in by Jeff Miller, who is a close ally of McCarthy. Miller is also a top GOP adviser and fundraiser. Disingenuous?

Public statements by other GOP legislators suggest strong support. For example, Congressman Ken Buck (R-CO), in reaction to the release of  the Competition in Digital Markets report cited above, wrote on behalf of his GOP colleagues for a strong support of legislation to toughen merger enforcement, create presumptions that certain activities are anticompetitive, shift burdens of proof, and increase enforcement funding—all areas of bipartisan consensus, despite other differences in approach. Coincidently, Buck has recently become ranking member of the House Antitrust Subcommittee. In addition, Senator Amy Klobuchar (D-MN) chairs the Senate’s Antitrust Subcommittee where, with ranking member Senator Mike Lee (R-UT), there is a history of working together. Although Lee has recently expressed skepticism regarding changing antitrust laws, he has strongly come out in favor of stronger enforcement.

Most criticism from the GOP has involved the uneven and non-transparent application of moderating rules and guidelines of the social media platforms, which have severely curtailed free speech. However, this is not solely a GOP concern, although the parties may differ on who/what should be allowed. By far the loudest attacks are coming from lobbyists, industry groups and Tech industry executives where executives are calling for Congress to “slow-down”. The U.S. Chamber calls the anti-trust legislation “dangerous”, and Chamber of Progress, Americans for Prosperity, the Computer and Communications Industry Association, the Competitive Enterprise Institute, TechFreedom, NetChoice and others, calling for hearings. Further, the Computer & Communications Industry Association has published a paper summarizing that the legislation “will impose (a) discriminatory prohibitions, (b) common carrier-type of obligations with respect to data sharing, (c) preventing Covered Platforms from engaging in mergers and acquisitions activities, (d) and/or forcing structural remedies on the Covered” platforms. Also, the ACCESS Act is under attack for raising more questions than it answers. Certainly, any time there is a call within a bill to establish a “technical committee” and to involve the NIST, much more work, than just the bill, is needed. Many things can happen between now and when the bills reach the President’s desk. For now though, Congress is firmly in the driver’s seat. Stay tuned.

Charlotte Walker is a board member and advisor for early to mid-stage technology companies, including Daily Clout, Inc. As an entrepreneur and former start-up/early stage venture capitalist her passion is innovation and the business and capital formation process.