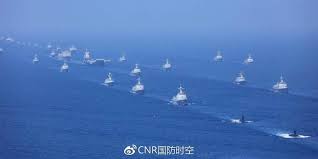 The Chinese Communist Party (CCP) is quietly but steadily modernising its PLA Navy for its political goal of expanding its influence in the far seas in Asia and Africa through penetrative power projection operations, according to a report compiled to help the American Defense establishment to better understand the balance of strategic competition between the United States and China.

The report, compiled by Rand Corporation’s foremost defence analysts Kimberly Jackson, Andrew Scobell, Stephen Webber and Logan Ma, “Command and Control in US Naval Competition with China”, has a section entirely devoted to emerging details of the CCP’s expansionist strategy through its naval arm, the PLA Navy.

The report clearly states that the modernising plans are directly linked to the CCP’s plans to expand its sphere of influence much beyond Asia. “As China pursues its rise as a global power, it is incrementally orienting its military toward power projection missions that support both China’s core territorial interests and its expanding range of global missions. The Chinese Communist Party (CCP) has focused on growing and modernizing its People’s Liberation Army (PLA) forces, advancing military technology, and expanding its ability to operate away from its borders through means such as the production of a second aircraft carrier and establishment of a PLA base in Djibouti. This gradual shift has particularly affected the PLA Navy, responsible for China’s power projection efforts at sea.”

It suggests that in order for the American navy to be equipped and competitive, it should orient itself to a “counter power projection” scenario. The report does not touch upon the sensitive issue of any future possibility of confrontation as it explains the scenario: “…the American navy must rely on its ‘ability to deny partially or completely the enemy’s use of the sea for military or commercial purposes’….Under counter–power projection… sea denial expands beyond ensuring the US Navy’s ability to project power, to also focus on ‘the employment of forces to destroy enemy naval forces, suppress enemy sea commerce, protect vital sea lanes, and establish local military superiority in vital areas’.”

The navy’s main missions in the Near Seas are to “project naval power as part of a joint campaign across the Taiwan Strait in furtherance of its vital role in the PLA’s sacred mission to unify China” and “coordinate with PRC paramilitary components, preferably below the threshold of war, to defend PRC territorial sovereignty and advance PRC maritime rights and interests in the East China Sea and the South China Sea”. The PLA Navy’s main mission in the Far Seas, according to the report, is “to protect the PRC’s expanding overseas interests, most of which are well beyond the First and Second Island Chains.”

What kind of naval “hardware” is the CCP planning to build for this? The report says: “The main PLA Navy platforms for these missions are a wide range of surface and subsurface platforms, including destroyers, frigates, corvettes, and aircraft carriers, as well as submarines. At the core of China’s 21st century fleet are more than 30 destroyers, 50-plus frigates, and more than 40 corvettes.

It is estimated that China currently possesses as many as 50 diesel-powered attack submarines. The PLA Navy also has approximately 60 amphibious ships, and more than 80 small patrol boats. These platform totals do not include China’s fleet of approximately 250 capable Coast Guard vessels.

The latest example of “China’s trajectory toward an ever-expanding reach in naval power has been the emergence of a full-throttle aircraft carrier program”. It currently has two aircraft carriers. “This program is one of the clearest indicators of the seriousness of the PRC’s intent to develop a significant Far Seas PLA Navy.”

Liaoning, China’s first commissioned carrier, primarily operated within the Near Seas, but it has “ventured out beyond the First Island Chain in the last two years”. The report says the first time was in 2016 “when it entered the Western Pacific via the Miyako Strait south fo Okinawa and north of Taiwan”. In June, 2019 it passed through the Bashi Strait, between Y’Ami Island of the Philippines and Orchid Island of Taiwan and part of the Luzon Strait in the Pacific Ocean. Both times it was escorted by “two frigates and three destroyers”. The second carrier, Shandong, was commissioned only in 2019.

The report says the movement of the flotilla into the Pacific “demonstrate the PLA Navy’s intention to project power beyond the First Island Chain on a more routine basis”, though “routine carrier presence to the Second Island Chain is at least five to ten years away”, awaiting the commissioning of more carriers.”…at least one other is currently under construction, and as many as three more carriers are on the way,” the report says.

Rounding off the PLA Navy’s plans are its “submarine forces, which are developing a fleet of nuclear-powered submarines outfitted with ballistic missiles”. The report says this could mean a change in the command structure as well to suit integrated operations by using “different methods of control and command depending on the type of military capability”.

The Rand report discloses the notified goal of the PLA Navy’s carrier force: “The goal is to be able to operate the carrier group in the Far Seas beyond the range of the protective umbrella provided by land-based aircraft and missile defense. It says efforts are simultaneously on to “increase the range of China’s aircraft carriers and exercise control and command structures for operations of naval carrier groups beyond the First Island Chain”, another indication of the “PLA Navy’s progress on blue-water power projection”.

According to the report, the establishment of China’ first international, off-shore base in Djibouti “is evidence of a growing realization that China cannot hope to improve its ability to project and sustain out-of-area military power without establishing an infrastructure or support network”. While officially China says Djibouti is only a “support base” for logistics, the Rand report states to the contrary: “…considerable effort has been made to improve its capabilities to dock all but the two largest vessels in the PLA Navy’s inventory…(has)a short runway and a helipad….reportedly has a garrison of 400 uniformed personnel, including a detachment of PLA Marines.”

As China embarks on its expansionist programme, the report says, the CCP will look more bases on foreign lands as the power projection exercise cannot bear fruit without a logistics network abroad. “…Djibouti signifies the breaching of an important psychological barrier and likely heralds the creation of additional overseas bases in coming years. Subsequent locations for PLA bases are likely to be quite controversial: Probable candidates are in South Asia, Southeast Asia, and the South Pacific.”