Opinion: Steven Maslow, “Ukraine and the Ironies of History” 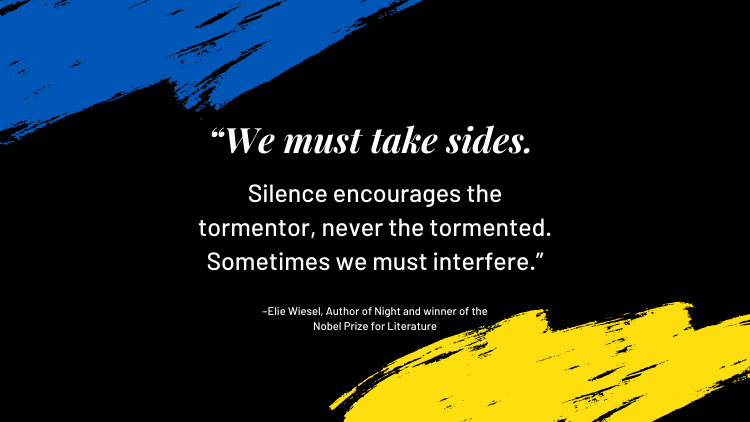 “We must take sides. Neutrality helps the oppressor, never the victim. Silence encourages the tormentor, never the tormented. Sometimes we must interfere.”
–Elie Wiesel, Author of Night and winner of the Nobel Prize for Literature

That truth is the first casualty in war has been observed at least since the time of Aeschylus in Ancient Greece. And as I sit here tonight, on the fifth day after the Russian army invaded Ukraine, my head is figuratively spinning from the fact that more than 5,167 people have died on Ukrainian soil. We here in America, like some distant deadly archer (ἑκηβόλος) half-reveal /half-conceal the pro-Russian and pro-Western views shaping this conflict, using NATO as a pen name that both asserts and hides our authorship.

While the momentum of death crescendos towards its appalling climax, we must remember the killing didn’t just begin five days ago. Included in our macabre tally are those Ukrainians that have been dying in this crisis since January 2014, when peaceful protesters in Kyiv’s Maidan Square were set upon by Ukrainian government forces seeking to disband them. The following month, after snipers opened fire on the protesters, the Ukranians called a special election and voted out their pro-Russian prime minister, who opposed further integration with Western Europe, and elected a more pro-Western candidate. All the while, both Russia and the USA actively sought unwarranted influence to promote their favored candidates. In the end, 67 Ukranians were killed in Maidan Square and 750 were injured by gunshot wounds. The protests spread to other parts of Ukraine, especially Ukraine’s southern port city of Odessa. There, in the spring of 2014, extremists from both camps attacked peaceful marchers. As it was to be repeated in 2017, in Charlottesville , VA, neo-Nazi and radical left groups appeared in Odessa and spewed their venemous hate. Pro-Western protesters were shot by armed thugs; Pro-Russian protesters seeking shelter in a Trade Union building were burned alive by an angry mob. 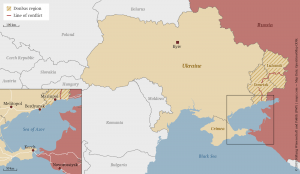 These events broke the camel’s back for the two Russophone provinces in Eastern Ukraine, Luhansk and Donetsk, also known as the Donbas region. They were decidedly more pro-Russian, and sought their independence from the rest of pro-Western Ukraine. For eight years now, fighting among the rebels in the Donbas region and Ukrainian armed forces have injured and killed many civilians.

Back at home in Brooklyn, I developed a migraine trying to hold contradictory thoughts in my head simultaneously: I read that Russia was incited to invade Ukraine; that Ukraine did nothing to provoke the Russian invasion. That Russians and Ukranians are historically one people but that the Kyivan Russ predates Moscow by several centuries. Perhaps we will hear that NATO deliberately provoked this crisis because the military-industrial complex stood to profit from it.

NATO’s raison d’etre was to hold back the Red Army from Western Europe, and NATO, the Soviets were assured, would not expand if they permitted German Reunification in 1989. Yet the USSR collapsed in 1991, and NATO–whose expansion committee included a senior manager of Lockheed Martin–expanded to Russia’s doorstep (Poland and Romania.) By 2014, 12 new members of NATO purchased $17 billion of military supplies from American companies, and by 2020, NATO’s collective spending reached $1.2 trillion, more than 20x Russia’s military budget.

Does America having to compete for LNG customers in Europe have anything to do with our insistence that the Germans close the Nord Stream pipeline–a pipeline that avoids Ukraine? In short, has an alert and knowledgeable citizenry investigated and analyzed the role of the military-industrial complex? Perhaps NATO’s expansion and broken promises are the real casus belli here, a situation Americans, with nearly 200 years of the Monroe Doctrine, would never tolerate, but expect Putin to. Or perhaps Putin is a vicious petro-Dictator, like Saddam Hussein of Iraq, Mohammed ‘bone saw” bin Salman of Saudi and Mohammed Al Maktoum of Dubai, seeking to profit from a war that so far has pushed oil prices above $110 per bbl, and claim a place in History for megalomaniacal reasons.

The sorrow and the pity of historical irony lies in the fact that two generations ago, Ukranians and Russians fought side by side against the Nazi invaders; today their grandsons are battling each other. For each side may rightfully say, in those agriculturally rich idioms that characterize slavic languages, “I didn’t think you would plant a pig on me!” (“Я не думала, що ти підсунеш мені таку свиню”) meaning “I didn’t think you would play such a dirty trick on me.”
It seems the opposing sides can, and do, say almost anything.

But it can never be said that Ukraine invaded Russia. And therein lies the difference between right and wrong. No nation in our time has the right to invade the sovereign territory of another without first presenting their case to the UN; no military has the right in our age of digital precision to launch missiles into civilian centers, and no people has the right to take away the right of the Ukrainian people to have rights.

Russia’s invasion of Ukraine is therefore egregiously wrong and it is illegal. An immediate ceasefire followed by a withdrawal is in the best interests of the security of both nations and the collective security of the entire world.

Modern Ukrainian history has been a day-and-nightmare: briefly independent after the first World War(1919), the country was soon engulfed by the Russian Civil War, declared a Soviet Republic and then suffered the Holodomor(1932-33), when nearly five million Ukrainains died in a terror-famine deliberately engineered by Stalin to subdue the them. Such was their suffering, Ukranians originally greeted the invading Nazi forces as liberators, but the illusion was quickly shattered, and leaders such as Dmitry Medvedev called for “watering the soil of Ukraine with German blood” as he led partisans in rear-guard actions against the Nazis. After the fall of the USSR, Ukraine finally declared its independence in August 1991.

I recognize that both Pro-Western and Pro-Russian forces have their legitimate grievances, and shame on us all for not condemning the shelling of civilians in Luhansk and Donetsk before this crisis. But bringing this argument onto the battlefield in Ukraine is an unacceptable violation of civilized norms and therefore in my view, our sympathies are with the people of Ukraine, who fearlessly, courageously and determinedly face this terrifying and criminal assault on their imperfect democracy.

Spread the love
This DailyClout article is the writer’s opinion.
One of our country’s most important freedoms is that of free speech.
Agree with this essay? Disagree? Join the debate by writing to DailyClout HERE.
Spread the love
Previous Story6 Canadian provinces lift mandates amidst protests
Next StoryBiden’s “we are going to get rid of fossil fuels” is a primary cause for shortages and inflation