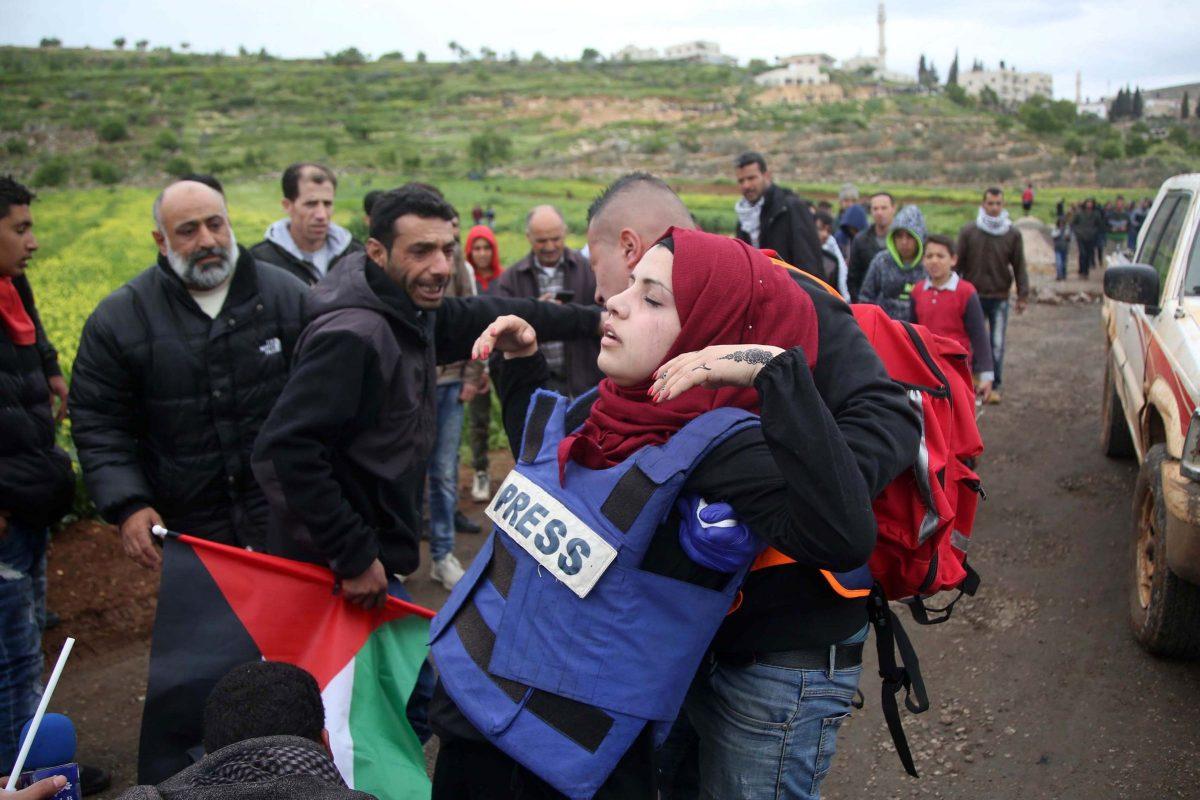 On the eve of the first anniversary of the “Great March of Return” at the Gaza border, lawyers and jurists around the world are calling on the prosecutor of the International Criminal Court (ICC) to investigate and prosecute Israeli crimes against the Palestinians.

Today, the International Association of Democratic Lawyers presented a petition from the International Lawyers Campaign for the Investigation and Prosecution of Crimes Committed Against the Palestinian People to Fatou Bensouda, chief prosecutor of the ICC. The petition urges Bensouda to initiate a full investigation and prosecute violations of international humanitarian law and international human rights law committed by Israeli officials in the Occupied Palestinian Territories. The petition has garnered the support of tens of thousands of lawyers worldwide.

The petition condemns “the unimaginable atrocities that have been committed and continue to be committed by Israel against Palestinian civilians which deeply shock the conscience of humanity.”

The petition denounces “the failure and refusal” of Israel to hold accountable “those suspected of committing crimes against Palestinian civilians,” which has resulted in “abandoning the rule of law and replacing it with widespread impunity for Israeli officials who have sanctioned and for Israeli individuals who have perpetrated such crimes.”

Israel Bombs Gaza Ahead of Great March of Return Anniversary

On March 25 and 26, in anticipation of the forthcoming election and the anniversary of the Great March of Return, Israel pummeled Gaza with dozens of airstrikes, instilling terror in 2 million Palestinians.

On Saturday, March 30, tens of thousands of Palestinians are planning to walk toward the Gaza border to commemorate the March 30, 2018, launch of the Great March of Return. For the past year, during the weekly protests, tens of thousands of Palestinians have demanded an end to the Israeli blockade of Gaza and the right to return to their homeland. In response, Israeli forces have engaged in violent and illegal repression against demonstrators.

On March 18, the United Nations Commission of Inquiry on the 2018 Protests in the Occupied Palestinian Territory, convened by the UN Human Rights Council, issued a 252-page report of its findings on the Great March of Return demonstrations.

“We present this comprehensive report with an urgent plea to Israel to immediately ensure that the rules of engagement of their security forces are revised to comply with international legal standards…. The excessive force that took place on 30 March, 14 May and 12 October 2018 must not be repeated,” Commission Chair Santiago Canton told the Human Rights Council.

The Commission found “reasonable grounds to believe that during these weekly demonstrations, the Israeli Security Forces killed and gravely injured civilians who were neither participating directly in hostilities nor posing an imminent threat to life. Among those shot were children, paramedics, journalists, and persons with disabilities. 183 people were shot dead, another 6,106 were wounded with live ammunition.”

Unless acting in lawful self-defense, the Commission noted, “intentionally killing a civilian not directly participating in hostilities is a war crime. Serious human rights violations were committed which may amount to crimes against humanity.”

The Commission concluded that the Israeli Security Forces’ “conduct also violated international humanitarian law, which permits civilians to be targeted only when they ‘directly participate in hostilities.’ This purposefully high threshold was not met by demonstrators’ conduct, in the view of the Commission, with one possible exception.”

The Commission recommended that the government of Israel:

The Commission’s report will be forwarded to the ICC.

In the summer of 2014, Israeli forces killed 2,200 Palestinians, nearly one-quarter of them children and over 80 percent of them civilians, in an operation dubbed “Operation Protective Edge.”

The following January, Bensouda opened a preliminary examination into the situation in Palestine. In a preliminary examination, the Office of the Prosecutor determines whether there is sufficient evidence of crimes of sufficient gravity falling within the ICC’s jurisdiction, whether there are genuine national proceedings, and whether opening an investigation would serve the interests of justice and of the victims.

The petition from the International Association of Democratic Lawyers urges Bensouda to take the next step — from a preliminary examination to a full investigation into Israeli crimes against the Palestinian people. In an investigation, the Office of the Prosecutor gathers evidence, identifies suspects, and asks ICC judges to issue an arrest warrant or a summons to appear.

On April 8, 2018, in light of Israeli actions during the Great March of Return, Bensouda stated that “any new alleged crime committed in the context of the situation in Palestine may be subjected to my Office’s scrutiny. This applies to the events of the past weeks and to any future incident.” She added, “I am aware that the demonstrations in the Gaza Strip are planned to continue further. My Office will continue to closely watch the situation and will record any instance of incitement or resort to unlawful force.”

She added, “Violence against civilians – in a situation such as the one prevailing in Gaza – could constitute crimes under the [ICC’s] Rome Statute.”

Bensouda noted, “Any person who incites or engages in acts of violence including by ordering, requesting, encouraging or contributing in any other manner to the commission of crimes within ICC’s jurisdiction is liable to prosecution before the Court, with full respect for the principle of complementarity.”

“Complementarity” means the court will take jurisdiction only over people whose home country is unwilling or unable to genuinely investigate and prosecute.

Israel has demonstrated its unwillingness to mount an impartial investigation into Operation Protective Edge. In August 2018, the Israeli military absolved itself of any wrongdoing in that operation.

The lawyers’ petition was inspired by the International Association of Democratic Lawyers’ previous international call for lawyers to support the campaign to free Nelson Mandela in the 1980s. Just as that campaign “proved to be for those living under Apartheid in South Africa,” the current petition “is an essential first step in securing equal justice under law” for the Palestinian people.

Spread the love
This DailyClout article is the writer’s opinion.
One of our country’s most important freedoms is that of free speech.
Agree with this essay? Disagree? Join the debate by writing to DailyClout HERE.
Spread the love
Previous StoryOpinion: Mueller Didn’t Exonerate Trump of Obstruction of Justice
Next StoryOpinion: US Takes Illegal, Dangerous Actions Toward Regime Change in Venezuela