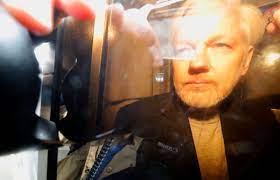 As the father and brother of imprisoned journalist Julian Assange wrapped up their month long “Home Run for Julian” tour through 16 U.S. cities, the government’s principal witness against Assange recanted his testimony. Sigurdur Ingi Thordarson, whom the Department of Justice (DOJ) had recruited to build its case against Assange, admitted to the Icelandic newspaper Stundin that he fabricated key allegations in the indictment in return for immunity from prosecution by the FBI in a quid pro quo.

The admissions of Thordarson — that he lied about Assange being a hacker — threatens to unravel the government’s case. “The factual basis for this case has completely fallen apart,” Assange attorney Jennifer Robinson told Democracy Now!

By enlisting Thordarson to construct a case against Assange, the U.S. government “made a deal with the devil,” constitutional law scholar Stephen Rohde stated during the tour’s June 28 Los Angeles panel discussion, in which I also participated.

The superseding indictment that the Trump administration filed in May 2019 charged that Assange and WikiLeaks obtained and published classified material provided by Army intelligence analyst Chelsea Manning, in violation of the Espionage Act. Those charges carry 170 years in prison. But they were vulnerable to attack because of what is called the “New York Times problem.”

Indeed, the Obama administration, which prosecuted more whistleblowers under the Espionage Act than all prior presidents combined, declined to indict Assange. WikiLeaks did what The New York Times, The Guardian, Der Spiegel, Le Monde and El País also did. It published articles based on documents Manning had leaked. The Obama administration feared establishing “a precedent that could chill investigative reporting about national security matters by treating it as a crime,” according to Charlie Savage of The New York Times. Obama could not distinguish between what WikiLeaks did and what news media organizations like the Times “do in soliciting and publishing information they obtain that the government wants to keep secret,” Savage wrote. This is the “New York Times problem.”

In light of potential difficulties in convicting Assange as a journalist, the Trump administration filed a second superseding indictment in June 2020, based on Thordarson’s allegations. It aimed to shore up the hacking count under the Computer Fraud and Abuse Act charged in Trump’s original indictment. Thordarson said Assange instructed him to commit computer intrusion or hacking in Iceland.

If U.S. prosecutors could portray Assange as a hacker instead of a journalist, they could get around the “New York Times problem.” But now that Thordarson has recanted his testimony, the hacking charge unravels.

Notwithstanding the Obama-Biden administration’s refusal to charge Assange, President Joe Biden has refused to dismiss Trump’s appeal of the British judge’s denial of extradition of Assange to the United States. Magistrate Vanessa Baraitser denied extradition on humanitarian grounds. She ruled that the U.S. prison system was unable to protect Assange from committing suicide since he would be placed in solitary confinement with onerous conditions, although she accepted the Trump administration’s other contentions. Trump appealed the denial of extradition and Biden is continuing that appeal, even though the U.K.’s High Court has not yet decided whether it will even allow the U.S. government permission to appeal. Meanwhile, Assange remains incarcerated in London’s maximum security Belmarsh Prison.

So why are the revelations by Assange and WikiLeaks so threatening to the U.S. government?

In 2010 and 2011, WikiLeaks published evidence of war crimes that the U.S. military had committed in Iraq, Afghanistan and Guantánamo. That is the basis for 17 charges against Assange under the Espionage Act. Manning provided the documents to WikiLeaks after she tried in vain to enlist her chain of command to investigate the evidence of torture and atrocities that she had uncovered.

The disclosures included 400,000 field reports about the Iraq War, 15,000 unreported deaths of Iraqi civilians, and evidence of systematic torture, murder and rape after U.S. forces “handed over detainees to a notorious Iraqi torture squad,” the documents reveal. WikiLeaks also published the Afghan War Logs, 90,000 reports about the war in Afghanistan, which revealed more civilian casualties by coalition forces than the U.S. military had admitted to. And the Guantánamo Files — 779 secret reports — showed that 150 innocent people had been imprisoned there for years and documented the U.S. government’s torture and abuse of 800 men and boys, in violation of the Geneva Conventions and the Convention Against Torture and Other Cruel, Inhuman or Degrading Treatment or Punishment.

But the most notable release by WikiLeaks was the 2007 “Collateral Murder” video, depicting a U.S. Army Apache helicopter gunship in Baghdad target and fire at unarmed civilians. At least 18 civilians were killed — including two Reuters reporters and a man who tried to rescue the wounded. Two children were injured. An U.S. Army tank then drove over one of the bodies, cutting it in half. The video records three separate war crimes that are prohibited by the Geneva Conventions and the U.S. Army Field Manual.

Manning was troubled by the comments of U.S. soldiers in the video who referred to their targets as “dead bastards.” She thought the revelations could spark a domestic debate about the role of the military and U.S. foreign policy in Afghanistan and Iraq and its effects on the Afghan and Iraqi people.

John described the 8-by-10-foot cell in which Assange spends 23 hours a day. Shipton cited the 2015 finding of the UN Working Group on Arbitrary Detention that Assange had been arbitrarily detained in violation of international law. Before he was sent to Belmarsh Prison more than two years ago, Assange had resided in the Ecuadoran embassy in London under a grant of asylum for seven years. After a change of government in Ecuador, a U.S.-friendly regime ended Assange’s asylum, and the U.K. police arrested him for charges in the indictment filed by the Trump administration.

“I don’t think a lot of Americans recognize what a gross injustice this is,” University of Southern California law professor Jody Armour remarked during the Los Angeles panel discussion. “When you have people from Amy Goodman to Tucker Carlson stepping back and saying … ‘this doesn’t smell right,’ when you have people characterizing someone as a hacker to try to solve the New York Times problem, because it’s not soluble, really.”

Gabriel Shipton, Assange’s brother, characterized the reception they have received during their nationwide tour as an “upwelling of support [that] has taken our breath away.” He is heartened by the Biden DOJ’s response to the Trump subpoenas of journalists’ records and emails targeting reporters from The New York Times and CNN.

Now that Attorney General Merrick Garland “has started to pull those back,” Gabriel noted, that is “very encouraging.” Gabriel is also encouraged by the release of whistleblower Reality Winner from prison and the Supreme Court’s narrowing of the scope of the Computer Fraud and Abuse Act. Moreover, Gabriel said, when the U.S. government confronts “authoritarian states,” such as Russia, China and Azerbaijan, about their human rights violations, those countries’ leaders point to the U.S.’s hypocrisy when it has targeted Julian Assange, a publisher.

“This is a global problem,” John said. He is reassured by the support for Assange from cross-party groups in Germany, the U.K. Parliament, the Australian Parliament, France, Spain, Italy and the Council of Europe, as well as Austria, Switzerland and Mexico.

“Let us not be fooled,” UN Special Rapporteur Nils Melzer wrote in a 2019 article in Newsweek, arguing that the extradition of Assange must be understood as a direct attempt at “drowning his radical challenge to government secrecy, which holds the power to change world affairs forever.” Melzer added that this is why “the powerful prosecuted Assange with ferocity, while proven war criminals are allowed to walk free.” Melzer ends his op-ed with a call to people in the United States to “use your democratic rights to hold your Government accountable.” Melzer’s investigation revealed that Assange suffered “prolonged exposure to psychological torture” during his confinement in Britain.

In February, 24 human rights organizations — including the ACLU, Human Rights Watch, Amnesty International, the Committee to Protect Journalists and Reporters Without Borders — wrote a letter to the DOJ, urging it to drop the appeal of the denial of extradition.

On Memorial Day, Biden invoked the global struggle for democracy, declaring that it thrives “when a free and independent press pursues the truth.” In publicizing evidence of U.S. war crimes, Assange and WikiLeaks revealed the truth for all to see. It is time for Biden to put his actions where his mouth is and dismiss the U.S. government’s appeal of the U.K. court’s denial of extradition of Julian Assange to the United States.

John Shipton stated that by prosecuting Assange, the U.S. government “brought shame upon themselves.” But, he added, “with the freeing of Julian and bringing him home to his family … we are allowed to emerge once more and see the stars.”