Opinion: “Can SARS-CoV-2 Become Even More Troublesome Than The UK And South African Variants?” 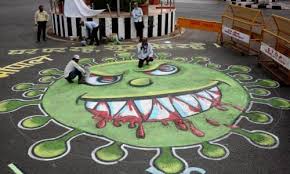 This article originally appeared on Forbes as part of a series on the Covid-19 variants. Random variation is an essential component of all living things. It drives diversity, and it is why there are so many different species. Viruses are no exception. Most viruses are experts at changing genomes to adapt to their environment. We now have evidence that the virus that causes Covid, SARS-CoV-2, not only changes, but changes in ways that are significant. Read the rest of the series here: part one, part two, part three, part four, and part five.

We are rapidly learning how SARS-CoV-2 mutates to create variants with new characteristics. Some of these new variants, such as those found in the UK and South Africa, may affect our ability to control the pandemic, including contagion mitigation, diagnosis, and vaccination.

Over the past few weeks, reports show that some variants of SARS-CoV-2 are more contagious than earlier strains. Sequence analysis of these variants reveals that their genome and proteins differ subtly from their less infectious origins. The viral protein studied in most detail is the spike protein. Multiple independent isolates harbor changes in the spike protein that account, at least partially, for their increased transmissibility.

In a preprint published on January 11, scientists from the Weizmann Institute of Science describe an experiment in which they attempt to mimic what occurs naturally. They looked for laboratory-created variants that stick more tightly to a structure on the cell’s surface that the virus uses to gain entry into our bodies. They were successful. The absolute winner bound the cell surface receptor, the ACE2 protein, 600 times more tightly than the original virus.

The shocking result was that their lab experiment reproduced almost exactly changes in naturally occurring strains in the UK and South Africa, and elsewhere. The lab-generated variants include precisely the same variants, specifically the changes designated S477N, E484K, and N501Y. The variants convey the same advantage in the test tube as they do in populations.

The winning laboratory-created variant contains seven amino acid substitutions in the spike protein’s receptor-binding domain. Studies of the structure of the protein reveal their function. Four of the seven stabilize the spike protein structure, and three tighten the intimate contacts the spike makes with the ACE receptor.

These were not the only laboratory-created variants the researchers found. Some convey only a slight binding advantage. However, when combined with the ensemble of three winners, S477N, E484K, and N501Y, they create a spike protein that binds 600 times more tightly to the receptor than the original. This particular combination of variants has not yet been observed in nature. Given the rapid rate of change, it seems such a variant may appear soon. We may then be dealing with a more infectious virus than either the UK or South African strains. The public health implications of such an event are profound.

Detailed analysis of the variants reveals how they improve the virus’s ability to bind the ACE2 receptor. Four of the seven changes stabilize the spike protein structure, while three tighten the spike’s intimate contacts with ACE2.

In contemplating these observations’ significance, consider that the scientists modified no more the 0.6% of the total genome and only about 12% of the spike protein. Analysis of many of the new variants that appear to be more infectious and seem to escape immune pressure reveals other spike locations and other viral proteins of interest. A similar study of the entire genome will likely reveal other tricks the virus deploys to increase infectivity and avoid immune detection.

Last spring SARS-CoV-2 variant that contained the spike mutation D614G spread more rapidly. This strain was so successful it has now displaced all others. All of the newly discovered more infectious variants contain the D614G. In other words, these new mutations ratchet up virus infectivity still further. The laboratory experiments described here suggest that naturally occurring variants have not yet reached the peak of infectivity.

It may be helpful to picture SARS-CoV-2 variants as a rapidly growing tree. At the base of the tree, a single strain of the virus provide the trunk. Ascending the tree branches appear, variants that contain all the earlier changes and still more of their own. Each is more fit to survive in its environment, the human population, than is its immediate ancestor. As we climb higher, the variants become more numerous, different from one another, even more fit to survive and flourish. What began as a few variants soon become many thousands, bedeviling our attempts to mitigate infection and disease.

We must prune the tree. We need to reduce the number of branches, stunt the tree. How? With methods advocated all along. We must administer vaccines as quickly as possible; we need to reinforce public health measures — social distancing, mask-wearing, and social isolation. As needed appropriate, we must incentivize and, if necessary, enforce the isolation of those exposed and contagious.

However dangerous we thought our foe, until a few weeks go we were confident we knew its form. We now realize that SARS-CoV-2 is a shape changer. Like Proteus, it changes even as we hold it in our grasp. As Hercules prevailed, separating Anteus from his mother earth, we must clear the ever-growing forest of virus variants by reducing the numbers of people infected, not only in our country but everywhere it has taken root.