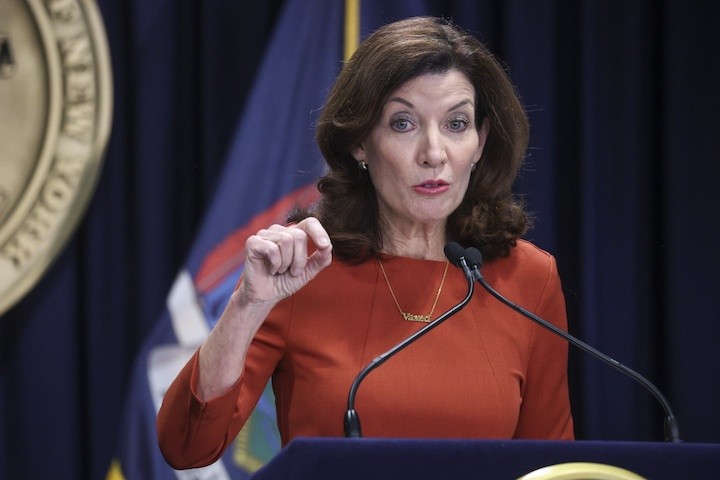 When Kathy Hochul replaced Governor Andrew Cuomo in August 2022, she was hailed, as the first female governor of New York. New Yorkers hoped for relief from the punishing lockdowns and mandates imposed by Cuomo, who was forced to resign when charged with sexual harassment.  But Governor Hochul has proven to be far worse than her predecessor Governor Cuomo. She has exploited the COVID crisis to shred our rights and freedoms, using unconstitutional mandates to cripple our health care system, kill our economy and punish our children, claiming that she’s “protecting public health.”

Hochul is now attempting to bypass the New York legislature and violate our democratic processes by installing regulations that give her permanent dictatorial powers. She has crafted new rules that will allow her to arrest and imprison anyone deemed a “public health threat,” and that grant her the power to impose mandatory masking at will, force more workers to get Covid injections, without any exemptions, and to store health records and personal information of all 19 million New Yorkers, in a government database.

“We strongly disagree with this ruling, and we are pursuing every option to reverse this immediately.”

The New York State Department of Education sent out a notice to all school districts saying that it would appeal the ruling and that there was an automatic stay, indicating that the mask mandate was still in force, which is disputed by many lawmakers.

But Governor Kathy Hochul and her Department of Education are lying to Superintendents. There is no stay on this court ruling. Governor Hochul’s authoritarian mandate was deemed illegal by the NY Supreme Court. Masks are not mandatory for students as of right now.”

“Governor Hochul is attempting to give herself entirely new powers, through the regulatory back door. Governor Cuomo used to do this all the time. If he could not get a bill he wanted passed in the legislature, he would simply write regulations that did the same thing, and our feckless legislature rarely did anything to stop him or to protect their responsibilities as lawmakers.”

We only have until February 13th to call and write our elected representatives to demand that they stop Governor Hochul from dismantling the rule of law and imposing authorization dikats.  Take action now before it is too late.

Get on the phone and call Governor Hochul and let her know you do not support to her authoritarian power grab and her scheme to bypass our elected representatives with backdoor regulations.

Call leaders of the NY State legislature and ask them if they support the Governor subverting the legislative process:

Speaker of the Assembly Carl Heastie

Remember: our democracy, our rights, our freedoms and our future are in danger.

Spread the love
This DailyClout article is the writer’s opinion.
One of our country’s most important freedoms is that of free speech.
Agree with this essay? Disagree? Join the debate by writing to DailyClout HERE.
Spread the love
Previous StoryNaomi Wolf on RT America
Next StoryEmergency Call-in for Griffith Park Ponies