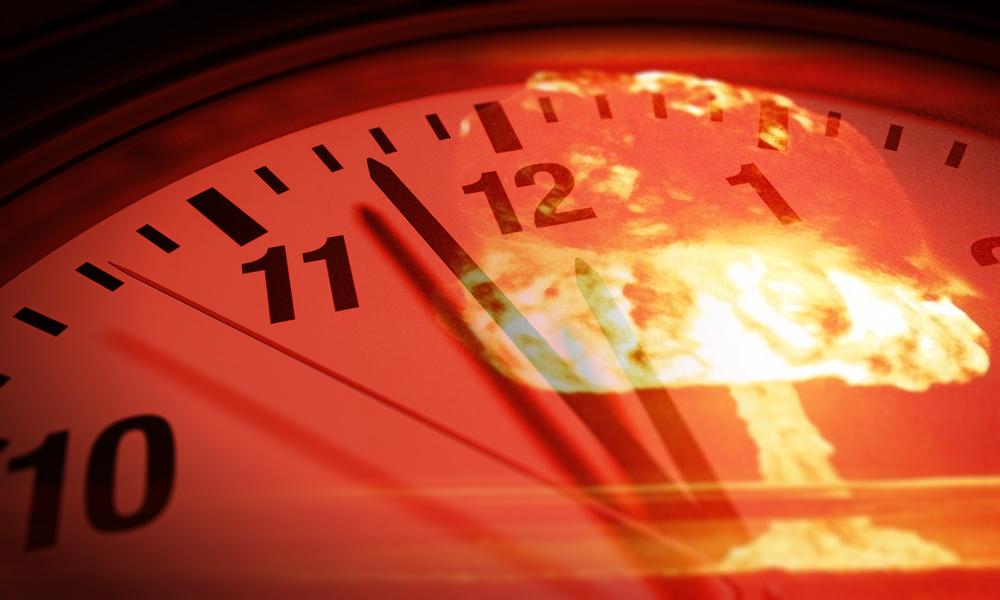 In 1987, the United States and the Soviet Union adopted the Intermediate-Range Nuclear Forces Treaty (INF) in an effort to eliminate missiles on hair-trigger alert for nuclear war due to their short flight times. It was the first time the two countries agreed to destroy nuclear weapons. That treaty outlawed nearly 2,700 ballistic or land-based cruise missiles with a range of roughly 300 to 3,000 miles.

The Trump administration thought nothing of pulling out of the INF. On February 2, the United States suspended its obligations under the treaty, starting a dangerous chain reaction that brings us closer to nuclear war. Russia followed suit and pulled out of the treaty the next day.

Then the three countries with the largest nuclear arsenals quickly test-launched nuclear-capable missiles. France conducted a test of its medium-range air-to-surface missile on February 4. The next day, the United States fired a Minuteman III intercontinental ballistic missile (ICBM). And an hour and a half later, Russia launched an RS-24 Yars ICBM.

Richard Burt participated in the negotiations of the INF during the Reagan administration. Last fall, he predicted that U.S. withdrawal would lead to Russia’s deployment of intermediate-range missiles and the United States’ development of new sea- and air-based weapons systems. Sure enough, on February 4, Russia’s defense minister, Sergei Shoigu,announced his country plans to build mid-range, nuclear-capable missiles within two years.

“New intermediate-range cruise and ballistic missiles and low-yield warheads now being planned both in Russia and United States are nothing other than filed-down triggers to all-out thermonuclear war,” Daniel Ellsberg, author of The Doomsday Machine: Confessions of a Nuclear War Planner, told Truthout. He warns of “nuclear winter,” which is the end of civilization as we know it. A consultant to the Defense Department and the White House in 1961, Ellsberg drafted Secretary of Defense Robert McNamara’s plans for nuclear war.

Beatrice Fihn, executive director of the International Campaign to Abolish Nuclear Weapons, concurs. “Trump has fired the starting pistol on Cold War II. Only this one could be bigger, more dangerous, and the world may not be so lucky this time around.”

The adoption of the INF led to the 1991 signing of the Strategic Arms Reduction Treaty (START), which considerably reduced the number of long-range strategic nuclear weapons. The New START, signed in 2010,requires the U.S. and Russia to reduce the number of deployed nuclear warheads from a maximum of 2,200 in 2010 to 1,550 in 2018. Trump’s cavalier withdrawal from INF does not portend well for the renewal of New START in 2021.

Moreover, Trump’s Nuclear Posture Review of 2018 would allow the United States to use nuclear weapons in response to non-nuclear attacks. This new U.S. policy opens the door to first-use of nuclear weapons, which is prohibited by international law.

The Nuclear Posture Review also violates the Nuclear Non-Proliferation Treaty, to which the United States is a party. This treaty requires parties “to pursue negotiations in good faith on effective measures relating to the cessation of the nuclear arms race at an early date and to nuclear disarmament.”

In order to convey the urgency of the threat to humanity and the planet, the Bulletin of the Atomic Scientists created the Doomsday Clock. It uses imagery of the apocalypse (midnight) and a nuclear explosion (countdown to zero). The decision to either move or leave in place the minute hand of the Doomsday Clock is made each year. The Clock is a universally recognized measure of vulnerability to catastrophe caused by nuclear weapons, climate change or other emerging technologies that could pose a threat. On January 24, the Bulletin once again kept the Doomsday Clock at two minutes to midnight. And that was before the U.S. and Russia pulled out of the INF.

“Trump and Putin are both posturing as gunslingers in a Western movie,” Ellsberg warned. “But the weapons in their quick-draw holsters are not pistols; they are doomsday machines. And this is not high noon; it is two minutes to midnight.”

In his book, Ellsberg proposes the U.S. government undertake the following measures toward the goal of abolishing nuclear weapons:

On January 30, Sen. Elizabeth Warren (D-Massachusetts), member of the Senate Armed Services Committee, and Rep. Adam Smith (D-Washington), chairman of the House Armed Services Committee, took a good first step. They introduced the No First Use Act, to establish in law that it is the policy of the United States not to fire nuclear weapons firstso “that the United States should never initiate a nuclear war.”

The U.N. Treaty on the Prohibition of Nuclear Weapons (TPNW) forbids ratifying countries “never under any circumstances to develop, test, produce, manufacture, otherwise acquire, possess or stockpile nuclear weapons or other nuclear explosive devices.” It also prohibits the transfer of, use of, or threat to use nuclear weapons or nuclear explosive devices. The treaty, adopted in 2017, will enter into force after 50 nations have ratified it. Thus far, it has 21 ratifications. But the five original nuclear-armed countries, which also happen to be the permanent members of the U.N. Security Council — the U.S., Russia, France, China and the U.K. — did not participate in the treaty negotiations and have not agreed to it.

Resistance against nuclear weapons also takes the form of civil disobedience, such as the recent action by the Kings Bay Plowshares 7.

When I was growing up in the early days of the Cold War, the fear of nuclear annihilation was pervasive. Although U.S. nuclear weapons have been on hair trigger alert for 73 years, “nuclear weapons have become normal,” Patrick O’Neill told Truthout. He and six other Catholic activists are facing up to 25 years in prison for their symbolic action to disarm the nuclear weapons on Kings Bay Naval Base in Georgia. They chose April 4, 2018, the 50th anniversary of the assassination of Dr. Martin Luther King, Jr., to mount their protest.

In May 2018, the Kings Bay Plowshares 7 were charged with conspiracy, destruction of property on a naval station, depredation of government property, and trespass, stemming from their action at the Kings Bay Naval Base. The base is homeport to six nuclear ballistic missile submarines each armed with 16 Trident II missiles. They carried with them a copy of Ellsberg’s book and left it on the base.

The defendants, who will likely go to trial this spring, maintain that any use or threat to use nuclear weapons of mass destruction is illegal, Kings Bay Plowshares 7 spokesperson Bill Ofenloch told Truthout. They are also arguing that their prosecution violates the Religious Freedom Restoration Act, because their actions were motivated by their Catholic belief that nuclear weapons are immoral and illegal. The Act was passed in 1993 to strengthen protection of free exercise of religion. Finally, the Kings Bay Plowshares 7 are claiming that Trump’s repeated threats to use nuclear weapons and his illegal conduct have not been prosecuted, so the government’s decision to prosecute only those who protest against nuclear weapons constitutes unlawful selective prosecution.

Hennessy told Truthout, “The U.S. withdrawal from the INF treaty is designed to ensnare Russia and the world in a new nuclear arms race.” She warns, “This is empire run amok, we have lost our democracy, let us pray we don’t lose our world and each other.”

It is incumbent upon all of us to resist the inexorable march toward nuclear winter. We must join together in coalitions and protest to Congress, the White House, in writing and in the streets. There is no time to lose. It is two minutes to midnight on the Doomsday Clock.

Spread the love
This DailyClout article is the writer’s opinion.
One of our country’s most important freedoms is that of free speech.
Agree with this essay? Disagree? Join the debate by writing to DailyClout HERE.
Spread the love
Previous StoryIs Beauty Political?
Next StorySpecial DailyClout “Cities” Series with Jason Haber