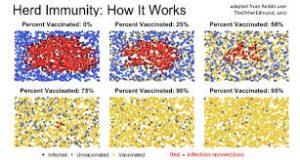 A White House medical adviser is promoting a “herd immunity” strategy to battle Covid-19. This would involve allowing Sars-CoV-2 to infect a majority of the population under a “benign neglect” strategy as the government would do little to stop it. This strategy would build immunity to a point where the virus could no longer move from host to host. The strategy would entail millions dead, millions more potentially left with unknown health complications, and no guarantee of success in the end.

Herd immunity more accurately requires malign neglect. Were this strategy to be implemented in the US, the death toll would be catastrophic. Assuming seventy percent of the population must have antibodies to achieve herd immunity and a population of three hundred forty million in the US, that would require two hundred thirty eight million people infections, which could involve lifelong health complications for those who get seriously ill. Assuming a death rate of one percent to three percent, the herd immunity strategy would kill 2.4 to 7.1 million Americans and three times that at the current ratio of infected to deceased.

Herd immunity has its origins in vaccines for diseases like polio and smallpox, but building immunity against a coronavirus is more difficult and there is every reason to believe a herd immunity strategy would not be successful. Coronaviruses are capable of reinfection in a short time frame. Coronaviruses like the common cold often seasonally reinfect and typically always are symptomatic. Scientists have recognized that reinfection from the same virus, but a different strain was possible for decades. There is a chance the coronavirus could return in another strain and reinfect the population.

The herd immunity strategy hinges on the production of antibodies among the infected population. Ten percent or more of people infected with Sars-CoV-2 do not develop robust antibodies. They are immediately at risk of reinfection after getting healthy. For those that do develop antibodies, they seem to fade over time which may account for reinfection by coronaviruses. This means they are immediately protected against reinfection, but only for a short time.

Reinfections have already started to occur. In Hong Kong, a man in his mid thirties was infected a second time after about four months with his first infection. Analysis definitely showed that it was reinfection with a different strain of the virus from the one that caused the initial infection. The second case resulted after he took a trip to Europe and he picked up a different strain while abroad. He had developed no antibodies from his first infection after being mildly symptomatic. This different strain was confirmed by genome sequencing. The man had no symptoms the second time.

Some have interpreted the Hong Kong patient not being sick the second time around as encouraging, however coronaviruses only cause disease in a small percentage of infections. There are cases in which the second infection causes greater illness. For example in Nevada, a man in his mid twenties was first diagnosed in April with symptoms and tested positive again five weeks later with intense symptoms. The second infection was caused by a different strain of virus.  European reinfection cases follow a similar trend: Coronavirus reinfection is unpredictable and can cause similar or worse symptoms the second time around.

The White House advisor is likely promoting a dangerous fantasy of something that is not possible. The herd immunity strategy allows millions of people to die as collateral damage, opens hundreds of millions of people to future health complications, endangers the healthcare system, and reaps untold socioeconomic costs to society. The floating of this strategy is reckless, and at best—inhumane.

William Haseltine, PhD, is chair and president of the global health think tank, ACCESS Health International. He is author of numerous books, including the recently released, “A Family Guide to COVID-19: Questions and Answers for Parents, Grandparents and Children”