FIVE FREEDOMS: Los Angeles Passes One of the Strictest US COVID-19 Vaccination Mandates 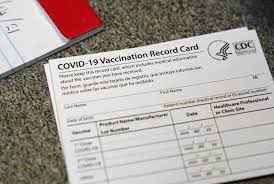 The Los Angeles City Council on Oct. 6 approved one of the strictest COVID-19 vaccination mandates in the country, requiring proof of vaccination to enter indoor restaurants, movie theaters, salons, shopping centers, and many more indoor venues.

People will have to provide vaccination proof at gyms, sports arenas, museums, spas, indoor government facilities, malls, restaurants, and bars. For people with religious or medical exemptions, negative COVID-19 tests within 72 hours of entry will be required, according to the ordinance, which doesn’t make mention of “natural immunity” afforded by a previous COVID-19 infection.

Unvaccinated individuals attempting to use government services will be provided with “alternative arrangements for access to government services,” including online or outdoor services, or providing proof of a negative test to enter, according to the ordinance.

Retail establishments such as grocery stores and pharmacies aren’t included.

The city council vote on Oct. 6 was 11–2, with Councilmen John Lee and Joe Buscaino voting to oppose the new mandate. The earliest the mandate can take effect is in one month, or on Nov. 6.

The mandate would have been allowed to take effect immediately had the measure received 12 votes.

Similar mandates have also been implemented in New York City, New Orleans, San Francisco, and West Hollywood. Some European countries, Israel, and other nations have also implemented vaccine passport-type systems, while Israel recently announced that residents will have to get a booster dose six months after they receive their second shot in order to be considered fully vaccinated.

Earlier this year, Lee told reporters that he had concerns with the proposal and argued that it’s “arbitrary and will not lead to increased vaccinations of our residents.”

The Los Angeles County Business Federation criticized the new restrictions, saying it would place Los Angeles businesses at “a competitive disadvantage to other neighboring areas,” while raising questions about how businesses could fight false accusations. Meanwhile, the United Chambers of Commerce of the San Fernando Valley said the mandate is impractical and unreasonable to enforce.

Other critics, including residents, said that the mandate is divisive, a form of discrimination, and would create a two-tiered society of vaccinated and unvaccinated people.

“I am appalled that the City Council is even putting forth such a draconian, unconstitutional, immoral mandate,” one said in a letter to council members, the Los Angeles Times reported.

According to the U.S. Centers for Disease Control and Prevention, fully vaccinated individuals can still contract COVID-19 and transmit it to others. Federal health officials have suggested that they’re less likely to develop symptoms, require hospitalization, or die.