It has been a long time since we have shared an update because while it may seem like there has been a lot of action; the ERA remains on life-support, clinging by a thread, despite all three branches of government putatively in support of women’s equality.

As many of you are aware, Equal Means Equal has engaged in protest actions, social media campaigns and direct attempts to communicate with the White House and the Department of Justice, but nothing has been done to either:

Additionally, there were ERA hearings held in the House last week; although no such hearings have been organized in the Senate, where the deadline removal bill is stalled.

Instead, there have been several “assuaging-type” actions of late including the aforementioned Hearings as well as the laughable White House “Listening Session” which took place on October 1st.  There have also been group phone calls with Senators Whitehouse’s staff, as well as similar calls with Senator Durbin and Cardin’s office which all happened over the last two weeks, thanks to the efforts of Helene de Boissiere Swanson and Katrina’s Dream.

While I do not believe that any of these legislators’ staff engaged in these calls or sessions with the intention to actually DO anything but keep jollying women along; I do believe that ultimately, they were not without merit, if only to show our legislators the tip of the iceberg of women’s anger at being, once again, thrown under the bus by a corrupt government in bad faith.

I do not think that any of these people, even those carrying these bills, really understand what is at stake for the ERA.  It hasn’t been important enough for them to understand the precarious and potentially devastating moment we are in historically; they are all still playing a game.  Unfortunately, it’s a bit of a Squid Game for American women and many of us are not at all amused.

Just to give you a sense of the depth of disrespect shown to those of us who participated in these faux “listening” events, the woman the White House sent to “listen” to us was literally out the door that day.  Seriously, Carrie Bettinger-Lopez was on her last day on the job and she came to hear women’s complaints about violence and equality. That is who they sent us, because that is how much we matter.

Let’s start with the fact that the activists were not allowed to participate in the panel discussion; the only way to interact was through the chat.  In the chat, women asked Ms. Bettinger-Lopez why Biden won’t publish ERA,  why the OLC memo is not being rescinded, why the Archivist is not being told to do his job, to whom would she pass on the information we were giving her, and who would be her replacement?  None of these questions were answered.  Not a one.

The Senators’ staffers were all clearly checking a box off some list that said they had to listen to us women every once in a while, to keep the peace.  Senator Cardin’s Chief of Staff hovered between clearly bored and aggressively dismissing any possible change in the useless strategy they’ve been employing for longer than I can remember;  refusing to accept any ERA co-sponsor onto SJ1 that doesn’t bring a Republican Senator with them.  So, that’s essentially a DOA strategy and they know it. 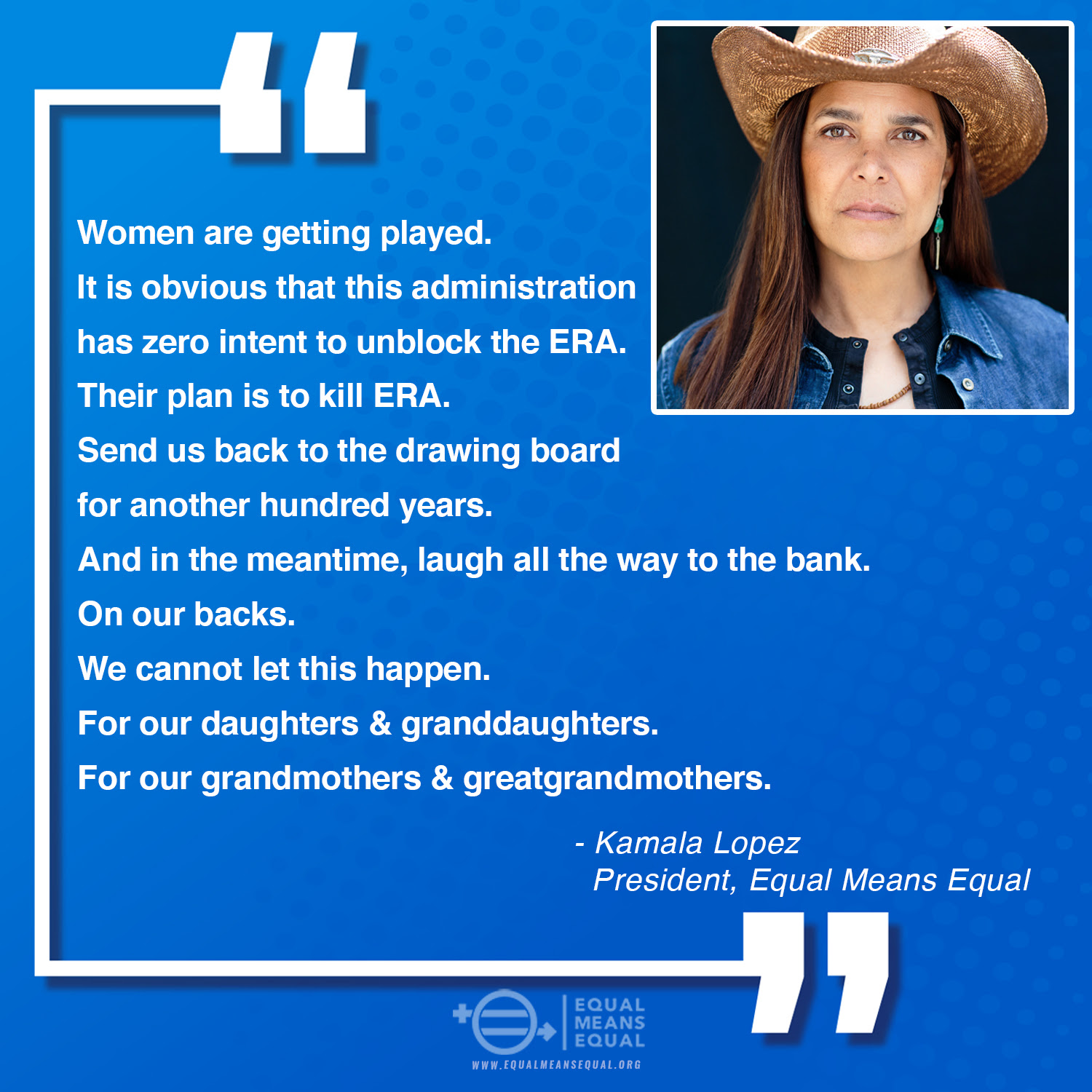 Bottom line, we’re getting PLAYED.  I know I’ve said it before, but it bears repeating.  It was so obvious that there was zero intent to actually get ERA, Helen Keller would have caught the drift.

If we don’t flip the script, if we don’t try another tack, we’ll be back to working for the Democrats to keep control, under the guise of helping women.  Let’s face facts:  NO ONE in power wants ERA to happen.  There are way too many grifts in play here; too much money being made.

Our only hope is to educate the masses, the 96% of the public who are in the dark on ERA, quickly. When the government can no longer hide their criminality in the cloak of our ignorance, then we will see them scramble to publish, adopt and enforce ERA, claiming that it was their plan all along.

We’ve seen these politicians and public figures change on a dime when they have no other recourse– when their duplicity, hypocrisy and disdain for the commoner is exposed and there is no rock left under which they can crawl.  That is our charge now, and with urgency – make the crime public.

Equal Means Equal has many plans in the works to do just that! 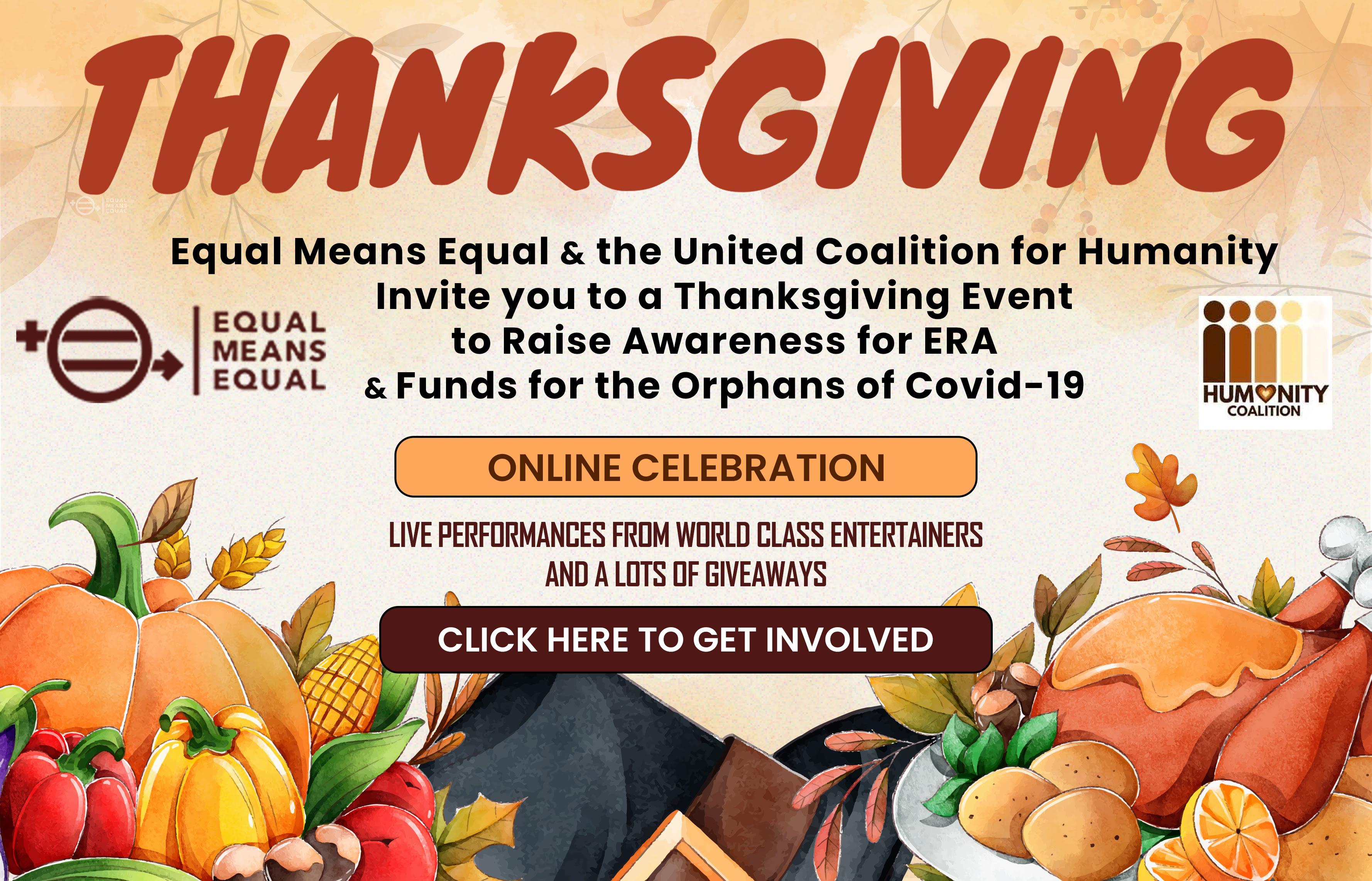 First up, Equal Means Equal is excited to join with Kurtis Blow’s United Coalition for Humanity to host a Thanksgiving event to raise awareness for the ERA and funds for the orphans of Covid-19.  The event will be virtual, held on Zoom, and moderated by Dr. Angela Harris, is a prominent Georgia activist, radio host and leader at UCFC.  There will live performances from world-class entertainers, and we are working on turkey giveaways!

We are in the early stages of planning this fantastic event. If you would like to get involved, please do! Drop us an email: info@equalmeansequal.org with the subject line: Thanksgiving Event and I will reach out to you.

We are also working on a really exciting media project designed for maximum public impact that we will be announcing soon!

Keep the faith, stay strong, healthy and never doubt that we will do this.

With love and thanks,

FUEL THE FIGHT FOR EQUAL RIGHTS