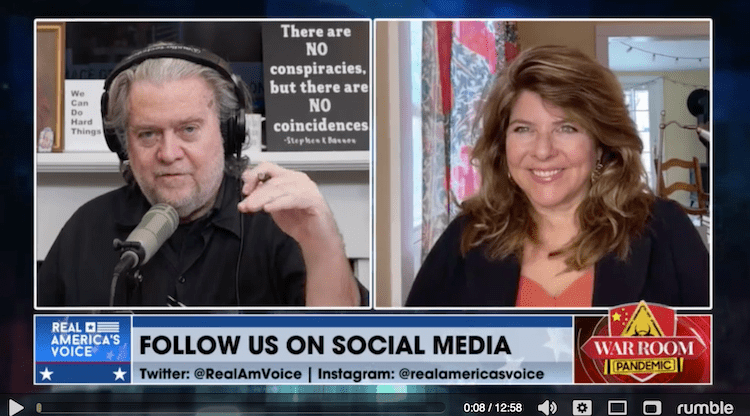 Dr. Naomi Wolf shares her perspective on the current situation with The Freedom Project in France in her appearance on Steve Bannon’s War Room. Parisian protests in France were recently met with tear gas and riot police as the authorities have come down hard in their efforts to stifle the movement.

Dr. Wolf states that mainstream media has been bought off by Pharma Money in the billions.

“Peoples’ trust in legacy media is collapsing…I think we can just dismiss all these sources of news.”

Dr. Wolf also offers a warning for what’s to come:

“Be prepared for very shocking images. And I feel like it’s sort of my job to show people what’s just ahead a few moves forward on the chess board we’re seeing globally. Unfortunately, those images of black shirts, jack-booted thugs in uniform in front of the Champs-Élysées, it’s not coincidental. These are famous images of the Nazis rolling into occupied Paris. They are exactly identical images in front of the Arc de Triomphe.”

“What will now happen is very violent images, very shocking images will be communicated around the world to terrify citizens. To intimidate citizens.”

Speaking on what to expect with the ongoing truckers’ protest in Canada, Dr. Wolf says:

“Free democracies are an aberration. They need constant vigilance. Historically, they haven’t had them very much for very long, and this is the default of tyrants. So yes, there’s a global war on democracies.”

She goes on to forecast that these horrible images being broadcast are only going to get worse. The images of cops being posted on social media, Dr. Wolf says, are cinematically posed for shock value. Moreover, Dr. Wolf says we can expect unfortunate situations, such as food shortages, to be blamed on the truckers and protesters.

“They are trying to broadcast terrifying, shocking images.”

Spread the love
Spread the love
Previous StoryLetter to DailyClout: Heartfelt Cry for Help from Long Island
Next StoryKeith Plate Shares His Insight on the Opioid Crisis