COVID Trillions: The HEROES Act, An Infrastructure Bill, And The Death of 25% Of US Small Businesses 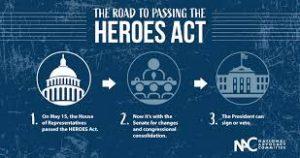 Since the last of our recent trilogy of blog posts covering the $2 trillion Coronavirus Aid, Relief add Economic Security Act (“CARES Act”), much has occurred to reveal the Act’s bias toward big business and the wealthy and its vulnerability to fraud and abuse. This time has also exposed the widening gap between the haves and the have nots, especially minorities who have been harder hit than anyone else, and the systemic biases in our systems. Most of us wait in anticipation of Congress doing something to address all of this.

Well, Congress has not been idle. On May 12, 2020, the House of Representatives passed the $3 trillion Health and Economic Recovery Omnibus Emergency Solutions Act (“HEROES” Act). And, on June 18, 2020, House Democrats unveiled a $1.5 trillion infrastructure bill known as the INVEST in America or Moving Forward Act. Both Bills face significant headwinds in the Republican controlled Senate and from the Administration, with threats to veto and/or to cut, drastically, spending. In short, negotiations have just begun and the summer recess, from July 3rd through the 17th, is upon us. We will not hear more until after the recess at the earliest. That said, both new Bills offer important antidotes to both the current emergency as well how to move forward in its aftermath for a better and more competitive America. As we have seen with the CARES Act, Congress in partnership with the Treasury and the Federal Reserve, does seem to come up with funds when its needs to. Putting aside how we pay for them both of these new Bills do address present and future dangers and deserve thoughtful consideration. We may have no choice.

While HEROES addresses the emergency and extends many benefits outlined in the CARES Act, INVEST in America calls for substantial funding to repair roads and bridges, to expand broadband access in rural areas, and includes measures to accelerate towards a “green” economy. The White House has already threatened to veto the bill and republicans complain that they had no opportunity to contribute to the bill. In my opinion, the only surprising thing about “INVEST in America/Moving Forward” is how long it took the concerning issue of deteriorating infrastructure to come before Congress. The American Society of Civil Engineers (“ASCE”) has been warning of a deficit in our roads, transportation, water, schools and other systems for as long as this writer can remember. In its latest report card on U.S. infrastructure, the ASCE cited a total funding gap of $2.1 trillion and rated U.S. infrastructure D-plus. Us? The United States of America? A D-plus?

The negative impact of crumbling infrastructure on economic activity is well documented and the U.S. has been slipping in other surveys, such as the World Economic Forum’s Global Competitiveness Report, for some time. The U.S. now ranks 13th in infrastructure quality against other nations. Wow.

Before I get back to HEROES and INVEST in America/Moving Forward, let’s recap what has happened. As of June 20, 2020, after a very rocky and confusing start, the Small Business Administration has approved lending under the Paycheck Protection (PPP) and Economic Injury Disaster Loan Emergency Advance (EIDL) provisions of the CARES Act for small businesses nearly 4.7 million loans amounting to $515 billion. This is remarkable. However, it has not come without damage to the small business economy and significant abuse. For example, some 372 and still counting, public companies successfully applied for loans and received funds, which was, questionably, an unintended consequence of the program. Evolving and unclear guidelines from the Treasury undoubtedly contributed to this and allowed larger companies to sneak into the SBA program, such as large restaurant chains that counted one or more restaurants of many as qualified for SBA loans. Do expect investigations into fraud on these programs to continue to ramp-up.

Further, an estimated 25% of the 30 million small businesses in the U.S. have either already shut down permanently or are on the brink of doing so according to various sources including a new report published by Main Street America, a program of the National Trust for Historic Preservation. In truth, millions of small businesses could either not get funding through the programs available because of banking relationships, or the programs simply did not fit their needs or business model. And, minority-owned businesses have suffered at twice the rate as their counterparts.

All in all, the CARES Act, while successful in many respects and certainly better than nothing, has also revealed and accelerated tremendous bias tilted in favor of big business and the wealthy. As a reminder, including Federal Reserve stimulus through the $600 billion “not so”  Main Street Lending Program (recently extended for companies with up to 15,000 employees and $3 billion in revenue) and tax breaks in the CARES Act, total funding and support for big business and the wealthy is upwards of $1.725 trillion, more than 2.5 times any other sector. In contrast and in descending order, states and municipalities, small business, individuals and families and finally, hospitals and front-line workers have been allocated $650 billion, $600 billion, $250 billion and $158.4 billion respectively.

Certainly, the opaquest of these programs is the Federal Reserve’s Main Street Lending Program where restrictions and transparency will likely be very limited. The program does include a ban on stock buybacks and dividends, as well as limits on executive compensation for the term of the loan and one year after. However, there is no explicit requirement under the program that companies maintain headcount. Instead, the Fed said borrowers should make “commercially reasonable efforts to retain employees” during the term of the loan. The Fed explained that means companies should make “good-faith efforts to maintain payroll” in light of the economic environment and the need for labor.

How will this help everyone? Sadly, not at all.

The CARES Act and current Federal Reserve action – all $2.5 trillion of it since March 11th – do very little for the middle and lower classes versus other sectors. Hence, as witnessed in the aftermath of the 2008 financial crisis, the wealth gap is likely to continue to grow. The bottom 80% of earners have been losing their share of total income, wealth and consumption since 1989 according to the Federal Reserve. From 1970 to 2018, the share of aggregate income going to middle-class households fell from 62% to 43%, while the share held by upper-income households increased from 29% to 48% during the same period. Lower-income households inched down from 10% in 1970 to 9%.

Some, if not all, of this gap can be blamed on the shift toward prioritizing shareholder value, which began in the 1980’s, over all other corporate stakeholders such as employees, customers, suppliers, the communities you do business in and use resources from. Further, lobbying, mergers – big getting bigger which concentrates economic and lobbying power – secures legislation that ensures their dominance and undermines their smaller competitors.

This, in combination with the hit to small businesses, structural racism and inequity in educational, financial, health care systems, the cost of education and health care, a possible crisis among farmers and the supply chain, and escalating environmental threats cannot be good for our economy, our democracy or the overall health and competitiveness of our nation. Our nation has not one crisis but many on just about every front that matters in our lifetime and to future generations.

These revelations bring me back to the HEROES Act. Up to this point, the nearly $4 trillion in stimulus pumped into the economy from Congress and the Federal Reserve, has done nothing to address these systemic issues or provide a strategic path forward. So, what is in the HEROES Act in terms of funding and initiatives? There is:

I believe that some of this will be adopted by the Senate in its draft of the Bill. But, what changes, additions and deletions actually take place is up for grabs.

As regards the $1.5 billion INVEST in America/Moving Forward Act; it addresses the long- standing decline in U.S. infrastructure, provides new jobs, attempts to address demographic disparities in education and housing, and strategically directs a path forward and toward a greener and more competitive economy. It can be broken down into 10 initiatives which include:

At this writing, it does not appear that there will be much, if any, support for Invest in America/ Moving Forward before the Senate. However, the HEROES Act may face more favorable review – at least some of it. Senate majority leader, Senator McConnell, has reportedly said that he wants to restrict the Bill to $1 trillion.  Although there does appears to be bi-partisan support for up to $2.2 trillion.

If, as a nation, we are to address any of the aforementioned systemic problems now before us, in my humble opinion, some of both Bills should be considered on a bi-partisan basis and additional thoughts should be given to our healthcare system, education – student loans, cost of education – the environment, the modernization of the small business administration, incentivization for good corporate citizenship, and finally, a reevaluation of the National Laboratories under both the Department of Energy and the Department of Defense, including their mission and purpose. The National Laboratories and Defense Advanced Research Projects Agency (“DARPA) have generated a very large proportion of our nation’s most important advancements in the 20th and now the 21st century across a wide spectrum of sciences and technologies, enabling our innovation lead, our economic resilience and growth, as well as spurring the formation of countless companies leveraging those technologies. Why not apply these same resources to other causes? What’s the downside? The Invest in America/Moving Forward Act may be the most important and consequential Bill to come before Congress in decades. Stay tuned.

Charlotte Walker is board member and advisor for early to mid-stage technology companies,
including Daily Clout, Inc. As an entrepreneur and former start-up/early stage venture
capitalist her passion is innovation and the business and capital formation process.

Spread the love
This DailyClout article is the writer’s opinion.
One of our country’s most important freedoms is that of free speech.
Agree with this essay? Disagree? Join the debate by writing to DailyClout HERE.
Spread the love
Previous StoryCOVID-19 and Finance: How U.S. Citizens Cover Their Bills During the Coronavirus Pandemic
Next StoryProtesters Attacked by Police Are Suing to Vindicate Their Constitutional Rights