“Be Wary of China’s Environmental Bargain” 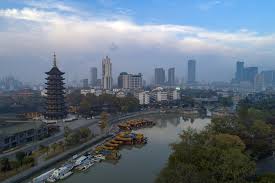 World environmentalists seemed encouraged when Chinese Communist Party boss Xi Jinping told the UN General Assembly that China will achieve zero net carbon emissions by 2060. But (https://thehill.com/opinion/energy-environment/519073-xi-jinping-as-an-environmentalist-cmon-man) the Chinese state under Xi can hardly be considered a true champion for environmental protections, because its “developing-at-all-costs” philosophy and exponential need for political stability leave no space for reform, or civil environmental movements.

Indeed, China is currently the world’s largest carbon emitter, accounting for 28 percent of global emissions, and its industrialization is not even complete. China has pledged before to reduce its carbon emissions only by 2030 and beyond.

While Xi’s pledges at the UN General Assembly don’t hold up under scientific scrutiny, but are best understood to reflect calculated international political strategy.

First, Xi’s pledges are intended to project China’s moral image as a responsible major power, by seizing the high moral ground on climate politics, folding it into the concept of a “community of common human destiny,” which is prominent among Xi’s repertoire of platitudes.

China’s rise to power has been hampered by the regime’s failure to project soft power, especially since Xi Jinping came to power; its international image has been tarnished by internal repression and the “wolf warrior” approach toward diplomacy. Research by the Pew Foundation reveals that despite Beijing’s claim that it is a responsible regime, “views of China have grown more negative in recent years across many advanced economies, and unfavorable opinion has soared over the past year.” https://www.pewresearch.org/global/2020/10/06/unfavorable-views-of-china-reach-historic-highs-in-many-countries/

If the Communist Party does not change the principles and the means by which it rules, China’s soft power will never improve and its image as a responsible power in international and global affairs will be difficult to build, making it unlikely that Xi’s “community of common human destiny,” which really means a Chinese-dominated world community, will be respected and embraced, especially by the West.

China is thus adding climate rhetoric to its soft power arsenal.  After all, climate affects the well-being of all mankind. And compared with democratic systems in the West and semi-democratic or authoritarian systems in some developing countries, the authoritarian system of the Chinese Communist Party does have a certain “advantage in administrative means” in terms of environmental management and reducing carbon emissions; for some, this lends credibility to Xi’s pledge to achieve carbon neutrality by 2060.

But there are still 40 years to go before this goal is reached. In fact, the target is less important to Xi Jinping than the present.  Xi Jinping needs this commitment to turn around China’s negative international image, and show the international community that, in contrast to the United States, which has withdrawn from the Paris climate agreement, China is willing to listen to and work with the rest of the world, taking a step toward replacing the United States as leader of a new global order.

Second, Xi’s climate charm offensive aims to divide the European Union and the U.S., hobbling their combined efforts, and a broader alliance of western democracies, to contain China.  Against the backdrop of opposing political systems and conflicting geopolitical interests between China and the West, and feeling growing American push-back, Beijing’s greatest concern is that U.S. allies, including the EU, United Kingdom, Japan, Australia, India and others, will join forces to fight a protracted new Cold War against China and besiege the country. Beijing’s primary foreign policy objective is thus to thwart the United States’ efforts to form an alliance to thwart China’s hegemonic ambitions.

Relative to the other four countries of the “five-eye,” intelligence-sharing alliance and Japan, the EU is more independent from the U.S., with a bigger economy and geopolitical influence; it is more important to China. Moreover, the EU’s multilateral decision-making mechanism makes it difficult to form and take common action against China, which China itself exploits. As long as the EU and the U.S. do not stand in the same trench, any confrontation between China and the U.S. weakens joint containment efforts. And the best policy tool for leveraging differences between the EU and the U.S. is carbon reduction. Europeans generally agree that no global problem, certainly not Chinese domination, poses a greater threat than climate change.

China appears to be seeking a deal, by which their environmental pledges are traded for Europe’s pledge to stay out of a US-led front aimed at containing China.  Indeed, China’s climate action could be key to the success or failure of global climate governance. It is estimated that if China were to meet its commitments, it would reduce global warming by 0.2 to 0.3 degrees Celsius in 40 years, thereby averting many of climate catastrophes that threaten the very existence of many countries.

But the European Union and other members of the international community would be ill-advised to make this bargain.  The Chinese Communist Party cannot fulfil Xi’s environmental promises and remain in power; they would slow China’s growth, and lead to the erosion of middle-class support for the regime.  Indeed, the “China Model” of governance and growth depends on continuing environmental degradation, as well as human rights violations.   Only democratic reform will allow China to reform those practices, and that ought to be the goal of any government concerned about climate change.

Dr. Jianli Yang is founder and president of Citizen Power Initiatives for China. The recipient of multiple international human rights, democracy and academic awards, Dr. Yang is an internationally recognized major leader and architect  of democracy for China.

Aaron Rhodes, president of the Forum for Religious Freedom–Europe, was the executive director of the International Helsinki Federation for Human Rights from 1993 to 2007 and is the author of The Debasement of Human Rights: How Politics Sabotage the Ideal of Freedom (Encounter Books, 2018).