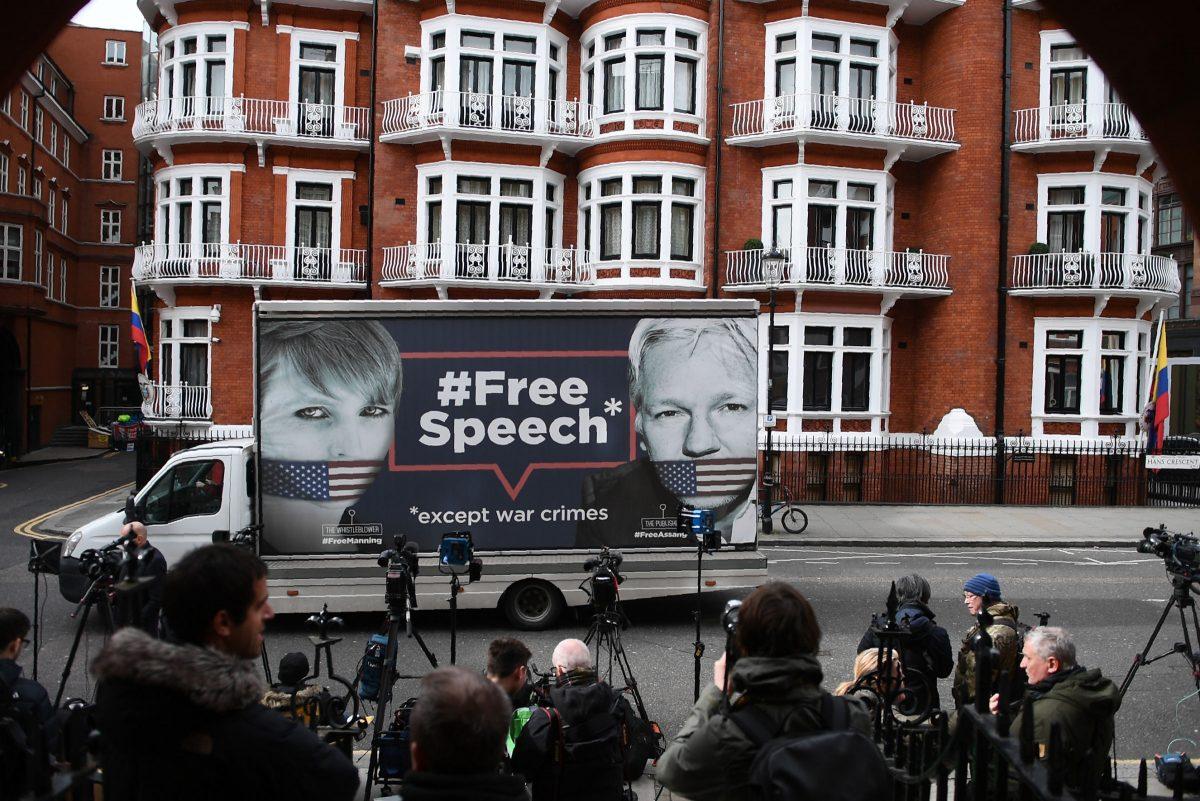 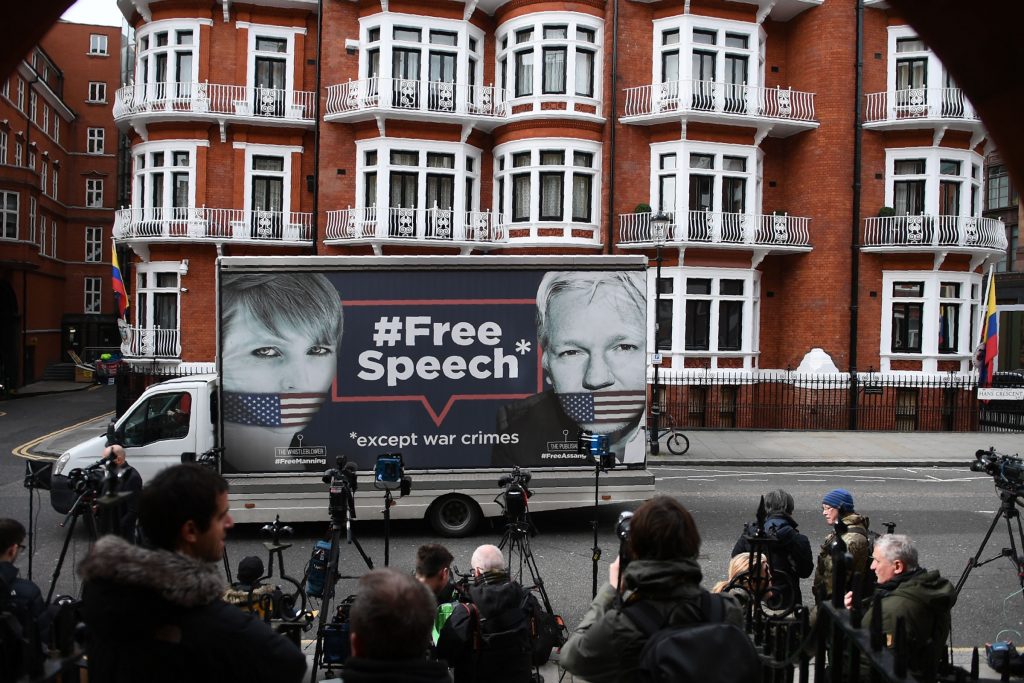 After living under a grant of asylum in London’s Ecuadorian embassy for nearly seven years, WikiLeaks co-founder Julian Assange was forcibly ejected and arrested by British police on April 11. Ecuador’s president, Lenin Moreno, accused Assange of “repeated violations to international conventions and daily-life protocols.” After an anonymous source revealed the “INA Papers,” a dossier that implicated Moreno in money laundering and contained personal photos of his family, WikiLeaks tweeted about it but denied any connection to the hacking.

Rafael Correa, who was president of Ecuador until 2017, had granted Assange asylum in 2012 to protect him from extradition to the United States to answer for WikiLeaks’s publication of evidence of U.S. war crimes. Ecuador’s foreign minister at the time, Ricardo Patino, said that without this protection, Assange could suffer “political persecution” or extradition to the U.S. where he might face the death penalty.

In 2010, WikiLeaks published classified documentation of U.S. war crimes in Iraq and Afghanistan, which Army intelligence analyst Chelsea Manning had provided. It included the “Collateral Murder Video” that showed U.S. soldiers in an Army helicopter gunship kill 12 unarmed civilians walking down a street in Baghdad.

Sweden investigated Assange in fall 2010 for allegations of sexual assault. Assange was living in Britain at the time. Sweden issued an extradition warrant so Assange could face questioning about the investigation in Sweden. Assange fought extradition but lost in Britain’s Supreme Court in June 2012. He sought and received refuge in the Ecuadorian embassy in London.

In spite of pressure from the British government, in August 2012, Correa granted asylum to Assange, who has remained in the Ecuadorian embassy ever since. Sweden dropped its investigation of Assange in 2017.

The Obama administration refrained from indicting Assange for fear of establishing “a precedent that could chill investigative reporting.”

Assange’s arrest comes thanks to the Trump administration’s decision to pursue WikiLeaks. The Obama administration refrained from indicting Assange for fear of establishing “a precedent that could chill investigative reporting about national security matters by treating it as a crime,” according to Charlie Savage of The NewYork Times. Obama’s government had difficulty distinguishing between what WikiLeaks did and what traditional news media organizations like the Times “do in soliciting and publishing information they obtain that the government wants to keep secret,” Savage wrote. News organizations, including the Times, published articles that drew on documents WikiLeaks had published in 2010, including “logs of significant combat events in the wars in Afghanistan and Iraq.”

An indictment filed on March 6, 2018, in U.S. District Court for the Eastern District of Virginia charges Assange under the Computer Fraud and Abuse Act. It alleges he was part of a conspiracy to access a computer without authorization in order to obtain classified information that “could be used to the injury of the United States.” Assange faces five years in prison if convicted.

Assange’s April 11 arrest was based on two grounds: failure to appear on a British warrant in 2012, and a warrant of extradition to face indictment in the United States. After his arrest, Assange was taken before a British judge and pleaded not guilty to failing to surrender to the court in 2012. District Judge Michael Snow convicted Assange, who now faces 12 months in prison in the U.K. for that offense. This is unrelated to the charges Assange would face in the United States.The indictment says Manning provided WikiLeaks with 90,000 “war-related significant activity reports” about Afghanistan, 400,000 about Iraq, 800 Guantánamo detainee “assessment briefs” and 250,000 U.S. State Department cables. WikiLeaks published the vast majority in 2010 and 2011. The indictment alleges Assange helped Manning attempt to crack a password to make it harder to identify Manning as the source of the classified information.

U.K. Should Deny Extradition of Assange to the U.S.

Meanwhile, Assange vows to fight extradition to the United States. Under the 2003 extradition treaty between the U.S. and the U.K., the U.K. can deny extradition if the offense sought is punishable by death. The U.S. Justice Department is apparently planning to file new chargesagainst Assange, in addition to those listed in the 2018 indictment. But under the 2003 treaty, the United States cannot charge Assange with violation of the Espionage Act, because it carries the death penalty.

Moreover, the Convention against Torture and Other Cruel, Inhuman or Degrading Treatment or Punishment forbids extradition to a country where there are substantial grounds to believe the person would be in danger of being tortured.

The danger of torture in the U.S. is real. During the first 11 months of Manning’s incarceration in 2010, she was held in solitary confinement and subjected to humiliating forced nudity during daily inspection. The former United Nations Special Rapporteur on Torture called Manning’s treatment cruel, inhuman and degrading, possibly rising to the level of torture.

There is thus good reason to believe Assange might be subjected to such illegal treatment if he were extradited to the United States.

A few days before Assange’s removal from the embassy and arrest, Nils Metzer, the UN Special Rapporteur on Torture, warned that extradition to the U.S. “could expose him to a real risk of serious violations of his human rights, including his freedom of expression, his right to a fair trial and the prohibition of cruel, inhuman or degrading treatment or punishment.”

Assange’s Indictment Will Chill Freedom of the Press

“The Justice Department has never charged journalists with violating the law for doing their jobs,” Savage wrote.

“Reporting on leaked materials, including reporting on classified information, is an essential role of American journalism,” the Electronic Frontier Foundation said in a statement.

The ACLU’s Ben Wizner cautioned that prosecuting Assange “would set an especially dangerous precedent for U.S. journalists, who routinely violate foreign secrecy laws to deliver information vital to the public’s interest.” He added that “while there is no First Amendment right to crack a government password, this indictment characterizes as ‘part of’ a criminal conspiracy the routine and protected activities journalists often engage in as part of their daily jobs, such as encouraging a source to provide more information.”

Reporters Without Borders, an organization that protects freedom of the press, called on the U.K. to oppose extradition of Assange. It would “set a dangerous precedent for journalists, whistleblowers, and other journalistic sources that the U.S. may wish to pursue in the future.”

The 2003 treaty between the U.S. and the U.K. prohibits extradition if the request is “politically motivated.” That limitation is certainly at play here: Trump administration has made a political decision to single out WikiLeaks and make it an example. The administration wishes to send a message to other press organizations that they publish material critical of U.S. policy at their peril.

The U.K. must deny the extradition of Assange to the United States.

Spread the love
This DailyClout article is the writer’s opinion.
One of our country’s most important freedoms is that of free speech.
Agree with this essay? Disagree? Join the debate by writing to DailyClout HERE.
Spread the love
Previous StoryShould Hugs Be Politically Lethal?
Next StoryBulletin Board—Call to Action: Tax Relief for Pregnant Moms