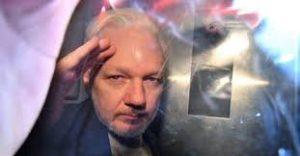 Three weeks of testimony in Julian Assange’s extradition hearing in London underscored WikiLeaks’s extraordinary revelation of U.S. war crimes in Iraq, Afghanistan and Guantánamo Bay. But the Trump administration is seeking to extradite Assange to the United States to stand trial for charges under the Espionage Act that could cause him to spend 175 years in prison.

Assange founded WikiLeaks during the Bush administration’s “war on terror,” which was used as a pretext to start two illegal wars and carry out a widespread program of torture and abuse of prisoners at Guantánamo and the CIA black sites. On October 8, 2011, Assange told a Stop the War Coalition rally in London’s Trafalgar Square, “If wars can be started by lies, peace can be started by truth.”

In 2010 and 2011, WikiLeaks published classified material that Army intelligence analyst Chelsea Manning had provided to the organization. Manning was prosecuted, convicted and sentenced to 35 years in prison for leaking the documents. As he left office, Barack Obama commuted her sentence to the seven years she had already served. That commutation provoked “tremendous anger” in the Trump administration and drew Trump’s attention to Assange, Eric Lewis testified. Lewis, chairman of the board of Reprieve U.S. and lawyer for Guantánamo and Afghan detainees, called this “a politically motivated prosecution.”

The files that WikiLeaks published contained 90,000 reports about the war in Afghanistan, including the Afghan War Logs, which documented a greater number of civilian casualties by coalition forces than the U.S. military had reported.

In addition, WikiLeaks published nearly 400,000 field reports about the Iraq War, more than 15,000 unreported deaths of Iraqi civilians, and the systematic murder, torture and rape by the Iraqi army and authorities that were ignored by U.S. forces.

WikiLeaks also published the Guantánamo Files, 779 secret reports constituting evidence of the U.S. government’s abuse of approximately 800 men and boys, ages 14 to 89. That abuse violated the Geneva Conventions and the Convention Against Torture and Other Cruel, Inhuman or Degrading Treatment or Punishment.

Perhaps the most notorious release by WikiLeaks was the 2007 “Collateral Murder” video, which depicts a U.S. Army Apache helicopter target and fire on unarmed civilians in Baghdad. At least 18 civilians were killed, including two Reuters reporters and a man who came to rescue the wounded. Two children were injured. A U.S. Army tank drove over one of the bodies, cutting it in half. The video contained evidence of three separate war crimes prohibited by the Geneva Conventions and the U.S. Army Field Manual.

As they are firing on the civilians, U.S. gunmen can be heard saying, “Look at those dead bastards.” In his written testimony, investigative journalist Nicky Hager drew a parallel between the Collateral Murder video and the television image of George Floyd screaming “I can’t breathe.”

Assange Cannot Be Extradited for a Political Offense

Like the heroic whistleblower Daniel Ellsberg, who helped end the Vietnam War by leaking the Pentagon Papers in 1971, Assange is the target of the U.S. government’s wrath for revealing evidence of war crimes by the United States. “I observe the closest of similarities to the position I faced, where the exposure of illegality and criminal acts institutionally and by individuals was intended to be crushed by the administration carrying out those illegalities,” Ellsberg, who was also prosecuted under the Espionage Act, noted in his written testimony

Ellsberg also wrote in his testimony that he considers the WikiLeaks publications “to be amongst the most important truthful revelations of hidden criminal state behavior that have been made public in U.S. history.” He views them “to be of comparable importance” to his own revelations, in performing “such a radical change of understanding.” Ellsberg says “[t]he American public needed urgently to know what was being done routinely in their name, and there was no other way for them to learn it than by unauthorized disclosure.”

While the Obama administration declined to file criminal charges against Assange for fear of setting a dangerous precedent, Team Trump demonstrated no such forbearance. By charging Assange under the Espionage Act, Trump is making him a poster boy for its full court press against the media, which he calls “the enemy of the people.” Assange’s prosecution would send an ominous message to all journalists: report the unvarnished truth at your peril.

No media outlet or journalist has ever been prosecuted under the Espionage Act for publishing truthful information, which is protected First Amendment activity. Journalists are permitted to publish material that was illegally obtained by a third person and is a matter of public concern. The U.S. government has never prosecuted a journalist or newspaper for publishing classified information, an essential tool of journalism.

Information-gathering, reporting and disclosure fit the classic definition of activity protected by the First Amendment’s guarantee of freedom of the press. There is no distinction between what WikiLeaks did and what The New York Times, Der Spiegel, Le Monde, El País and The Guardian did as well. They all published articles based on documents WikiLeaks released. This is the reason Obama administration — which prosecuted an enormous number of whistleblowers — considered, but refrained from, indicting Assange. They feared establishing “a precedent that could chill investigative reporting about national security matters by treating it as a crime,” according to Charlie Savage of The New York Times. Team Obama could not distinguish between what WikiLeaks did and what news media organizations like the Times “do in soliciting and publishing information they obtain that the government wants to keep secret,” Savage wrote. This was called the “New York Times problem.”

Although the U.S. government claims that Assange endangered informants named in the published documents, John Goetz, an investigative reporter who worked for Germany’s Der Spiegel, testified that Assange took pains to ensure that the names of U.S. informants in Iraq and Afghanistan were redacted to protect their identities. WikiLeaks, Goetz testified, went through a “very rigorous redaction process,” and Assange repeatedly reminded his media partners to use encryption. In fact, Goetz said, Assange tried to stop Der Freitag from publishing material that could result in the release of unredacted information.

Moreover, WikiLeaks’s revelations actually saved lives. After WikiLeaks published evidence of Iraqi torture centers the U.S. had established, the Iraqi government refused Obama’s request to extend immunity to U.S. soldiers who commit criminal and civil offenses there. As a result, Obama had to withdraw U.S. troops from Iraq.

WikiLeaks also revealed evidence of wrongdoing by other countries besides the United States. The organization uncovered Russian surveillance, published exposés of Bashar al-Assad in Syria, and some say WikiLeaks’s exposure of corruption in Tunisia and torture in Egypt helped catalyze the Arab Spring.

“10 years on, the War Logs remain the only source of information regarding many thousands of violent civilian deaths in Iraq between 2004 and 2009,” John Sloboda, co-founder of Iraq Body Count (IBC), noted in his written testimony. IBC is an independent NGO that does the only comprehensive monitoring of credibly reported casualties in Iraq since Bush’s 2003 invasion.

“WikiLeaks cables have contributed to court findings that US drone strikes are criminal offences and that criminal proceedings should be initiated against senior US officials involved in such strikes,” Clive Stafford Smith, co-founder of Reprieve and attorney for seven current Guantánamo prisoners, wrote in his submitted testimony.

Ostensibly to get around allegations that it is prosecuting Assange for conducting journalism, the Trump administration is trying to paint him as a hacker by accusing him of conspiring with Manning to break into a government computer to steal government documents, in violation of the Computer Fraud and Abuse Act. But, as Patrick Eller, a digital forensic expert, testified, the attempted cracking of the password hash was not technologically possible in 2010, when the conversation between Assange and Manning occurred. Even if it were feasible, the purpose would not have been to conceal Manning’s identity and it would not have given Manning any increased access to government databases.

The prosecution of Assange would set a disturbing example for journalists and media outlets that publish information critical of the government. Team Trump singled out Assange to deter journalists from publishing material that criticizes U.S. policy. If Assange is extradited to the United States and convicted of the charges against him, it would chill journalists from reporting the facts for fear they could be indicted under the Espionage Act.

Journalism historian and University of Maryland professor Mark Feldstein testified that the actions of WikiLeaks — “encouraging sources to focus on valued information of political, diplomatic or ethical significance in order to disclose it to the public — are not only consistent with standard journalistic practice, they are its lifeblood, especially for investigative or national security reporters.”

“Julian Assange’s actions, which have been categorized as criminal, are actions that expose power to sunlight,” Noam Chomsky said in his written testimony, “actions that may cause power to evaporate if the population grasps the opportunity to become independent citizens of a free society rather than subjects of a master who operates in secret.” Chomsky added, “That is a choice and it’s long been understood that the public can cause power to evaporate.”

When she set the November 16 date for the defense to submit closing arguments, Judge Vanessa Baraitser asked the defense how the U.S. presidential election would affect its case and declared that her decision on extradition would come after that election, stating, “That’s one of the factors going into my decision.” Kristinn Hrafnsson, editor-in-chief of WikiLeaks, said that the judge “acknowledged what has been clear since even before the first indictment against Julian Assange was unsealed — that this is a politically motivated prosecution.”

Baraitser, who has granted extradition in 96 percent of the cases that have come before her, plans to issue her ruling on January 4. If she grants extradition, there will be several levels of appeals, including to the European Court of Human Rights.

The stakes could not be higher.