Amazon Fires Will Have Global Consequences. The UN Must Act. 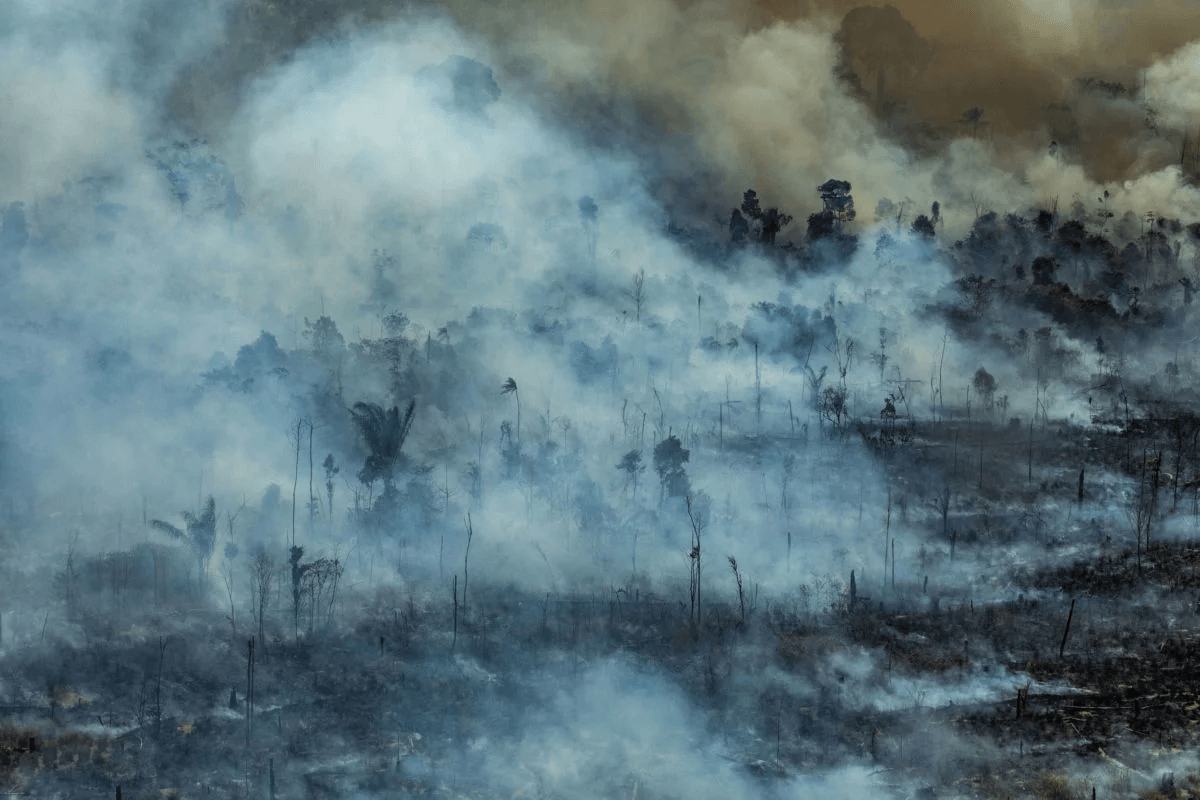 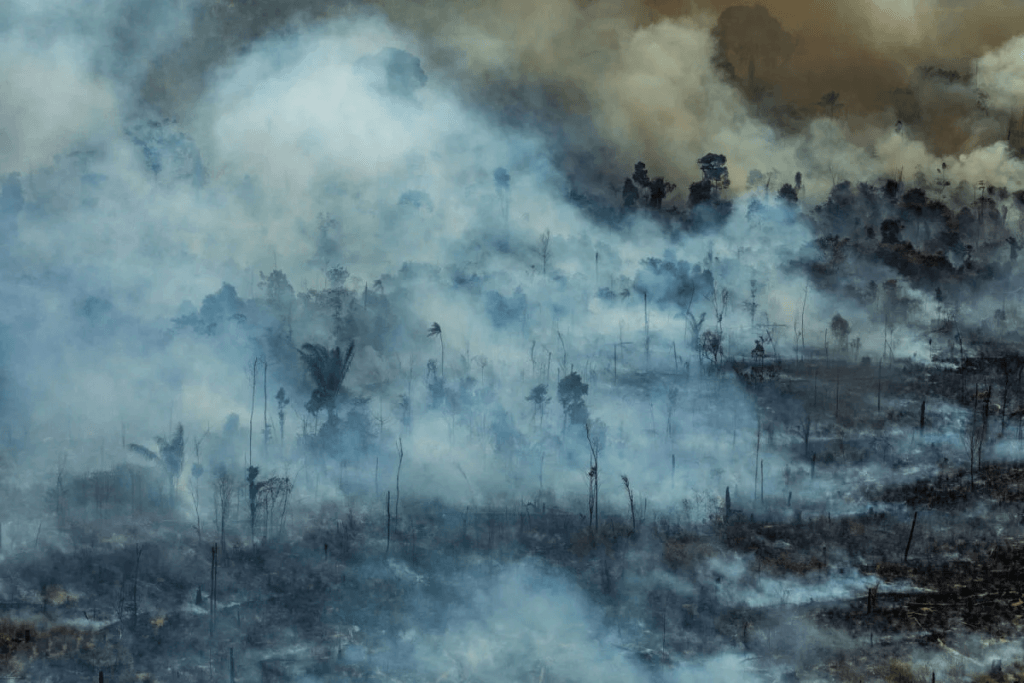 The Amazon is burning. Nearly 75,000 fires have started in the iconic Brazilian rainforest this year to date, an 84 percent increase from the year before. Since August 10, a spate of intentionally set fireshave been raging in the Amazon. But Brazil’s president Jair Bolsonaro, who took office in January, let them burn for two weeks before sending firefighters to put them out following an international outcry.

Fires ravaging the Amazon pose imminent peril to the 34 million people and 3 million species of animals and plants that live in the world’s largest rainforest, which covers 2 million square miles.

Damage from the raging fires will change the face of the planet. The rainforest is home to 10 percent of the species on Earth, including many types of plants and animals that cannot be found anywhere else.

“The loss of the Amazon’s biodiversity will be beyond devastating for the planet,” Dahr Jamail wrote in Truthout, noting that many scientists consider the Amazon to be the Earth’s most important site of biodiversity.

French president Emmanuel Macron tweeted, “Our house is burning. Literally,” and exhorted, “Members of the G7 Summit, let’s discuss this emergency first order in two days!” Bristling at Macron’s exhortation, Bolsonaro wrote on Twitter, “The French president’s suggestion that Amazon issues be discussed at the G-7 without participation by the countries in the region evokes a colonialist mentality that is out of place in the 21st century.”

In light of Bolsonaro’s refusal to provide resources to extinguish the fires, Macron threatened to block the Mercosur-European Union trade deal. Bolsonaro capitulated. He allocated $7 million and sent 44,000 troops and military aircraft to the burning areas.

But that falls short of what is needed to put out the fires and save the Amazon. “We’re talking about battling what will be hundreds of fires burning simultaneously, beyond any road network, distributed across thousands of miles,” according to Douglas Morton, head of the Biospheric Sciences Laboratory at NASA’s Goddard Space Flight Center. “It’s quite a challenge to mobilize resources for one of these fires, but to simultaneously track down and put out a number of these sorts of fires … demands essentially a full press,” adding, “You really do need thousands of people.”

The countries in the G-7 – the U.S., Britain, France, Germany, Italy, Japan and Canada – donated $20 million to help fight the fires, but Bolsonaro refused to accept the money unless Macron apologizes. Bolsonaro is playing games while the Amazon burns.

Donald Trump, who skipped the climate meeting at the G-7 summit, later said he hadn’t agreed to contribute to the $20 million because of lack of coordination with Bolsonaro.

Moreover, even if accepted, this money would not be sufficient. Rick Swan, of the International Association of Fire Fighters, told The Washington Post that, by comparison, to extinguish the 2017 Tubbs Fire in Northern California, “the costs alone were $100 million.”

In other words, a massive international effort is needed to end the Amazon fires.

Those who are critical of ongoing colonial and neocolonial dynamics but who are not entirely familiar with the context of the fires in Brazil may at first be skittish about backing international efforts to pressure Bolsonaro to end the fires. In truth, however, Bolsonaro’s appeal to anti-colonial politics is deeply cynical and should not deter progressives with anti-colonial commitments from backing international endeavors to end the fires.

The cynicism of Bolsonaro’s anti-colonial appeal is evident in the context of widespread popular protests in which Brazilians have marched holding signs with messages, such as “The Amazon belongs to the world, and we need the world’s help right now” and “SOS.” Protesters took part in some 30 demonstrations across Brazil last weekend, and thousands of demonstrators marching in Rio chanted, “The Amazon stays, out with Bolsonaro.”

Indigenous peoples in Brazil have also made clear that they hold Bolsonaro’s government responsible for the destruction of the Amazon. The Coordination of Indigenous Organizations of the Brazilian Amazon (COIAB) issued a statement expressing “extreme concern about the rapid destruction of the Amazon rainforest, home to our families and to all the resources we need to live.” COIAB stated, “The related record rates of deforestation and outbreaks of fire are a consequence of the anti-indigenous and anti-environmental genocidal speeches of this government.”

A group of Indigenous Huni Kuin leaders recently called for a stop to the fires, saying: “Nature is crying and we are crying. If we don’t stop this destruction of Mother Nature, future generations will live in a completely different world to the one we live in today. This is Mother Nature’s cry, asking us to help her. And we are working today so that humanity has a future. But if we don’t stop this destruction, we will be the ones that will be extinguished, burned and the sky will descend upon us, which has already begun to happen.”

As empowered by the United Nations Charter, the Security Council should find that the fires in the Amazon pose a “threat to the peace” and order measures to restore and maintain international peace and security. Those measures “may include complete or partial interruption of economic relations.”

The Council should require that member states refrain from entering into trade agreements with Brazil unless and until it agrees to allow international economic and physical firefighting assistance. As Moira Birss, Amazon Watch’s finance campaign director said in a release issued by the Institute for Public Accuracy (IPA), “Now that the world is finally paying attention, it’s important to also understand that governments and companies around the world are emboldening Bolsonaro’s toxic policies when they enter trade agreements with his government or invest in agribusiness companies operating in the Amazon.”

In addition, the Council should order member states to contribute money and personnel to fight the fires raging in the Amazon.

Bolsonaro’s Policies Have Exacerbated the Fires

Fires do not ignite themselves in the rainforest. “Basically, the Amazon hadn’t burnt in hundreds of thousands or millions of years,” said William Magnusson, a biodiversity specialist at the National Institute of Amazonian Research in Brazil. According to National Geographic, “A growing number of manmade fires have plagued the Amazon in recent years, imperiling the ecosystem. The rainforest is not built for fire.”

Farmers in the Amazon cut down trees to clear the area for planting. Miners and loggers start fires to cover their illegal activities. And some fires are set to force Indigenous peoples from their land. Bolsonaro, however, has fanned the flames in the Amazon.

A New York Times analysis found that for the first six months of 2019, Bolsonaro’s pro-development, anti-environmental policies led to a 20 percent decrease in enforcement measures aimed at protecting against deforestation, as compared to the same period in 2018.

“Bolsonaro must take immediate, comprehensive steps to not only extinguish these fires but also address the root causes of this environmental catastrophe: the roll-back of environmental and indigenous rights protections and the recklessness of the profit-seeking agribusiness industry,” Christian Poirier, program director at Amazon Watch, said on the IPA release. But, he added, “This burden isn’t on the Brazilian government alone. We are all global citizens of our shared planet and must take shared responsibility for its preservation.”

We must act internationally to save the precious Amazon rainforest. Citizens of the 15 member countries on the Security Council should pressure their governments to vote in favor of a resolution calling for an economic boycott of Brazil and the provision of resources to quell the forest fires. The future of our planet is at stake.

Spread the love
Spread the love
Previous StoryCandidates Must Commit to Immediate US Withdrawal From Afghanistan
Next StoryThe Week In Congress: Red Flags and Background Checks, Keeping Troops In Afghanistan, and the Budget